Did this years ago. Kind of interesting. I get the impression most of us are in the NE .
SURVEY:
P.com Handle: String ( pronounced strang down here)
First name or Nickname: Jim
Location, as specific as you want: NE SC.
Years on here: since the 1980s
Years paddling: 40+
Favorite boat or 3: WS Tarpon 160, Pungo 140, Rapidfire, Stellar S18S
Favorite places: Lake Hartwell, Jocassee, Edisto River, Bull Island NWR

You really are one of the Pnet/Pcom oldtimers! I didn’t know it existed in the 1980s.

Handle: pikabike
First name or Nickname: Patty
Location, as specific as you want: SW CO
Years on here: joined in 2001, I think
Years paddling: 19
Favorite boat or 3: WS Tempest 165, SKUK Pilgrim Expedition, Nelo 520 S (surf ski)…and a boat I loved paddling but did not own, NDK Romany LV
Favorite places: Nooooo, I can’t list so many places! But regions I can list: southern CA beaches, the PNW coast and “Salish Sea,” and the US and Canadian Rocky Mountain lakes. I’d better stop now.

My Mother and her sister were both into sports(competitive basketball, and track), and both were avid fishing women. They either hired a guide, or they poled and paddled an old hand made,wooden,18 foot john boat that belonged to them. My Mother and I are pictured in that john boat (1944 or 1945).
I got the paddling bug at a very early age. Never cared for fishing; I wanted the see what was around the next river bend,

Have been paddling since the late 1950s. Have paddled somewhere between 10 and 15 thousand miles(piddling total for some). I quit counting mileage over 10 years ago. Have spent over 2 years of my life camped in the woods, on river banks, and river gravel bars… Paddled flat and whitewater rivers (up to class 3). Don’t paddle on lakes or ocean, and don’t mess with kayaks. Own 20 or 21 canoes?(lost count this year). Highest count was 25. Favorite canoes: Bell Wildfire, Hemlock SRT, Mohawk Probe 12 and Probe 12 II, Swift Dragonfly, Mad River Guide, Swift Osprey, and several Blackhawks.
Not sure, but think I first hit Pnet in the late 90s?
Old handle was thebob.com.
My favorite paddling partner is my wife, who I taught how to paddle in the early 1980s. She has been paddling her own solo canoe for over 20 years. She don’t mess with kayaks either!

You paddle a kayak? 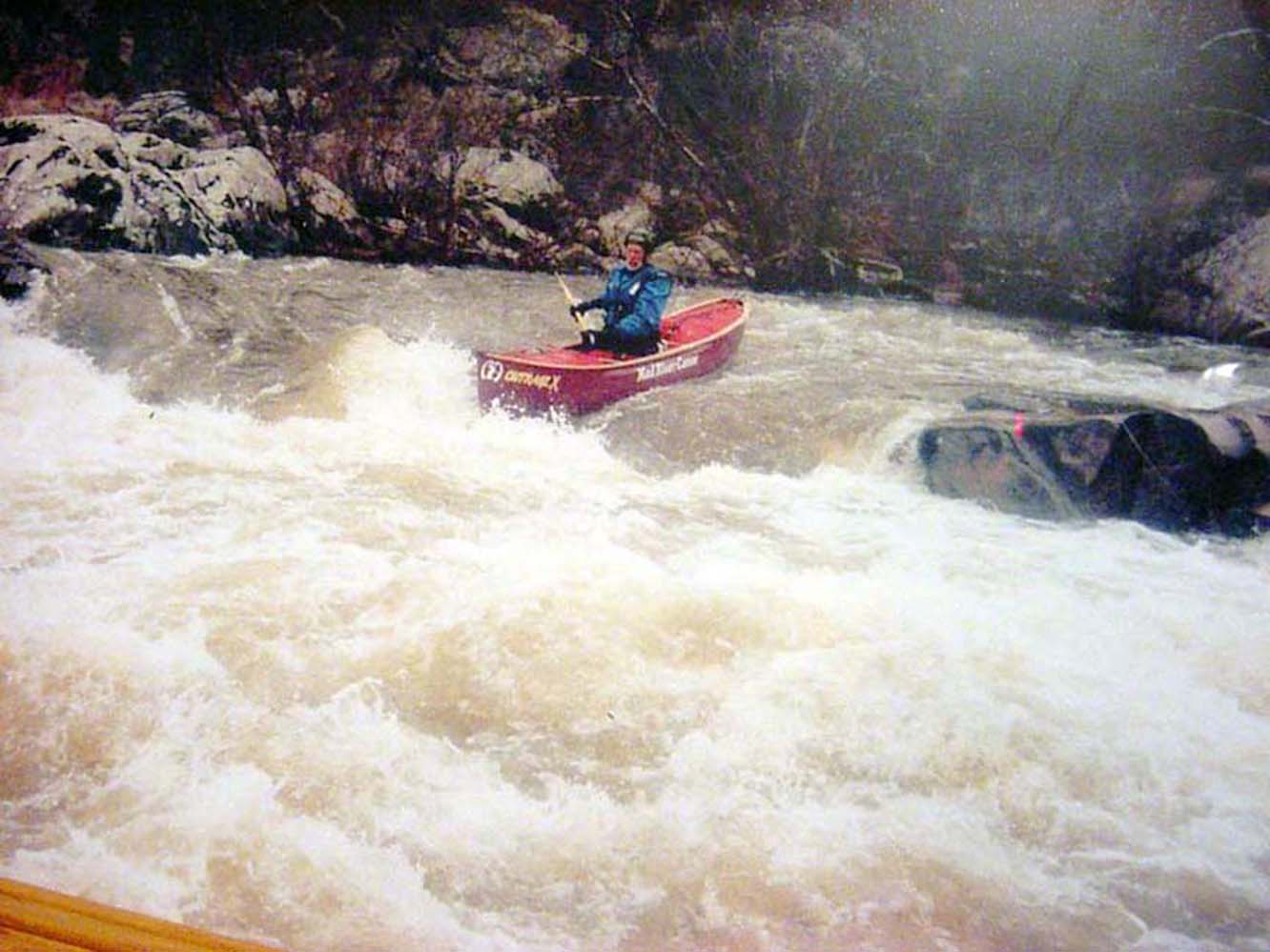 Surely you jest!
Kayaks? We ain’t got no kayaks! We don’t need no stinkin’ kayaks!!!

I’ll play
P.com handle: Rex (pronounced Rayex locally) I used to be Kudzu before the site got all revised. I rejoined as Rex.
Location: Central NC
Years on here: I think it was early 2001.
Years paddling: About 19 years. MUCH more experienced with road bicycling.
Favorite boats: Tempest 165 and Dagger Alchemy
Favorite places to paddle: The nearby reservoir is beautiful and just minutes away. Coastal NC. Jocassee is gorgeous. Local pool is great for rolling and bracing.
Always birding on the bike or in the boat. Teaching myself to identify birds by ear.

PKb, I have no idea when p.net started.

I’ve checked a number of times to find out where a poster was located. This forum is the only one that I regularly browse that does not allow you to enter it in your profile for others to see.

pnet name - Celia
Have no idea when I came onto pnet, a while ago
Location - Upstate NY
Paddling - Canoed as a kid, nothing serious. Kayaking about 25 years. Started paddling in early/mid 90’s, proper sea kayaks by maybe 1998 or 99.
Fave boat - Really can’t pick. Most broadly useful at this point in my life is the Romany.
Fave place - midcoast Maine, if ever returned to WW, easily accessed placed like Zoar Gap

I started working at my Uncle’s shop in the Adirondacks in the mid-80s. After moving out west I hit the white water seriously, and eventually became a sponsored WW open boater, BLM River Ranger (getting paid to paddle!), and a Swiftwater Rescue Instructor. After seriously abusing my shoulders for years, I’ve pretty much hung up the WW boats and am really enjoying flatwater paddles with my young son. At any given time I’ll have between 8 and 10 boats, although I think I’m up to 13 at the moment.

Kim here
Western Maine . Moved here from the CT shoreline over 20 years ago. Reason; got a job here. While we lived in CT we managed an AMC paddling facility here in Maine and the drive was horrific twice a month… CT had good paddling though and we lived on the shoreline. Thats where I got into kayaking.
Canoeing since 1963. You do the math. Its depressing.

Favorite paddles? Newfoundland , Northern Ontario ( Wabakimi Woodland Caribou), Southern ON ( Algonquin for years and years,) La Verendrye, Yukon and Snake Rivers in Canada… In the US the Everglades and Green Rivers.
And home. Gotta go paddle my neighbor just called so say the loons are rafting up! Home waters are sometimes the best!

Always birding on the bike or in the boat. Teaching myself to identify birds by ear.

Rex, check out Nathan Pipelow’s* field guides, one each for eastern and western US. Besides the info on birding by ear, these recent guides have updated maps that in many cases show the shifts in bird ranges since the last Peterson guides (published in 2010).

Previously, I had noted some shifts between the 1990 Peterson and the 2010 Peterson. There were not a huge number. But between the maps from 2010 and 2019, an alarming increase in the trend continues. The shifts show movement to cooler regions, either farther north or higher elevations.

*Great name for a birder. Look up scientific name of Spotted Towhee.

David here in Coeur D’Alene Idaho.
Been kayaking for about five years? Just getting going in canoes since they seem better for things like back country hunting.
Paddling for me is mostly fair sized lakes and getting into the wilderness, although I grew up on the Washington coast and have played out there and have more plans for out there in the future.

-Preferred outings: NOT a fan of whitewater (did some in my 20’s including the class 5 Cheat Canyon – glad to have survived but didn’t have much fun) and more of a leisurely flatwater paddler, interested mainly in scenery, wildlife and camaraderie than distance or speed. Some kayak and canoe camping experience (long time backpacker and outdoor instructor and guide), would like to do more such trips but lack reliable and nearby partners for same.

Favorite places to paddle: local to home would be the last few miles of the Yough, semi-urban stretches of the Monongahela, the 40 mile meandering shorelines of Lake Arthur. Memorable adventures farther afield were Salt River on St. Croix, Indian Arm near Vancouver, the River Derwent in Yorkshire England, Rideau Canal in Ontario, a couple of short outings with Celia on coastal Maine inlets, Lake Tahoe, Qajaq Training Camp on Lake Michigan, many trips along the Connecticut coast of Long Island Sound, the sparkling class 1 and 2 descent of the Red Moshannon and more tranquil sections of the West Branch Susquehanna, both in northern PA.

Handle: Mcimes, not a real word, made from a combination of parts of my name
First name or Nickname: Marcus
Location, as specific as you want: I think of myself as a Minnesotan, but live 100 miles north of Los Angeles currently.
Years on here: ~2012ish
Years paddling: 8ish of weekly paddling. Paddled at camp as a kid
Favorite boat or 3: Ocean/Big water/Waves = Fenn Swordfish S surfski. Flat water or casual crusing=Wenonah Jensen 18. Racing=Crozier V1 Pro
Favorite places: Rum River, MN, BWCA, MN , The Gorge (Hood River, OR), any ocean with a good 15mph+ onshore wind and 4’+ waves. Rainbow Reservoir, CT, Housatonic river delta, CT, Goleta state beach to Santa Barbara harbor downwind when the wind is coming from the west or northwest
I’ll add 2 more for thought
Dream paddling destination not visited Miller’s Run, Fish Hoek, South Africa (the greatest downwind run in the world. youtube Millers Run if you dont know what it is)

if you could paddle with anyone dead or alive, who? Verlin Kruger, Gene Jensen, or Serge Corbin

**Handle: ** PJC I liked the directness and simplicity of NT’s handle but found it was taken, so I used my own initials, though I didn’t want to be too PC.
First nameor nick name: Pat
Age: 68
Location: South Central Wisconsin (now)
Years on board: Since '99 or ‘00
Years padding: 50+, though there were quite a few years when I wasn’t very active.
Favorite Boat: Favorite is always use-dependent. Overall, I guess my Blackhawk Starship, especially for camping/cruising on large rivers and lakes. For fast lake tandem cruising Bell Mystic. For general knock around on rocky rivers (tandem or solo with sizable waves) Nova Craft Prospector 16. For rock gardens solo Mad River Flashback.
Favorite Places There are many… Lower Wisconsin River is “home.” Big, hypnotic, often lazy, but can sometimes call on one’s endurance. Very nice for camping. North Fork Flambeau, Namekagon, Bois Brule, and (if there’s water in it) Jump Rivers in N. Wisconsin. The Green River in UT is amazing. Had a fine time on the Edisto years ago. There are many nice lakes in MN & Northern WI I’d go back to in an instant. Used to go to Lake Packwash, Red Lake and the Waubeskang Chain in ONT when I was young - and I’d like to revisit sometime. Current, Buffalo, and Jack’s Fork in MO & AK
.
I’ll follow MCImes’ lead here…

Dream Paddling Destination Not Visited: Open to suggestion - Eleven Point River in MO is one I’ve missed so far and sounds interesting. Glen Canyon if L. Powell continues to drop.
If you could paddle with anyone, dead or alive, who: Sigurd Olson, Ed Abby (wouldn’t that be a hoot), John Bates (a thoughtful, gentle soul, and North Woods Naturalist extraordinaire).
Wish I could paddle with Black Walter, DuluthMoose, Ken Hecht, WildernessWebb again - all delightful people to paddle and share a camp fire with.

Years on board Since 98 (guess)

Favorite Boat…Kajaksport Artisan Millennium and Sawyer Summersong I like to paddle long distances and at speed.

If you could paddle with anyone, dead or alive…My friends that paddle…you know who you are

On P.com/net: On for about 5 years ten years ago, recently (year) restarted

Favorite boats: My own design woodstrip

Paddled: Nigh onto every river in Florida

Dream paddle: been there a few times already

I love canoe and kayak camping. Spent many years backpacking. Probably spent about 2 months out of most years primitive camping in the wild somewhere from beaches to mountains, and even swamps, and desserts.

I take an occasional photograph.

That makes 3 of us south of the Mason Dixson line. I know many more but few are at the level of the northern contingent.