I’ve been paddling an older ('99) CD Solstice GTS for the past six years and love it. It fits me well and I have no complaints.

A Caribou S in kevlar came up for sale locally, at a silly low price, and I’m wondering how the Caribou might compare to the Solstice.

Would appreciate feedback from those that have paddled both…

I paddles one a long time ago. I don’t fit in a GTS Solstice. I didn’t fit in a Caribou S. Deck for me was very low. Water was basically fairly calm 12" bay chop. Stability was good and it was responsive as I remember. Short experience less than an hour when I rented it. Feet are size 10.5 for reference. I’m sure many have much more experience in a Caribou. How cheap?
Can’t test it out?

Probably tad slower than your GTS if you were in a race. Really doesn’t matter cruising or top speed 6.5 vs 6.75 or what ever it is.

I own an older model Solstice GTS and a Caribou S.
The Solstice GTS tracks stronger and is more efficient at a bit higher speeds. The Caribou has more rocker, even though it’s hard to tell looking at the kayaks on the water, as the Caribou does not have an upswept bow, attempting to maintain low above-water exposure to wind. I think that was part of the nod towards a more “Greenland” style. I find either easily managed in wind on the move in terms of directional control.
In stronger winds, especially when steep chop enters the picture, the Soltice GTS, when just sitting and not in motion, really like most any kayak, tends to settle broadside to the wind and waves. The Soltice GTS is a more difficult kayak to break from this broadside position with just sweep strokes. They have to be quite strong and well-executed to pull this off. As you probably know, in those situations, some forward or backward momentum is all you need to apply a static rudder stroke on the move and initiate an effective turn. And once you’re moving, you can just point it in a direction and paddle. Once moving, the Solstice GTS is an exceptionally easy and efficient kayak for traveling along. Its speed and efficiency and ease of directional control in wind has made the Soltice GTS a go-to kayak for me for comfortable, stable, A to B travel. The Caribou does not get so locked in broadside to wind and waves when sitting still and is fairly easily maneuvered with a sweep stroke. The Caribou is much easier to maneuver overall. You can still be pretty quick speed-wise in a Caribou. If you’re a strong enough paddler, you will hear gurgling off of the bow and hit a fairly solid speed wall at that point. You have to push for racing-type speed to run up against this.
Paddling out from the beach through waves, the Caribou does a better job of rising over the waves, where the Solstice GTS spears through a little lower. Neither has a highly rockered bow, and neither suffers the speed efficiency penalty of a highly rockered bow. It’s easier to avoid burying the bow while riding in front of waves in the Caribou.
They both are stable boats. They both have high secondary stability. The Soltice GTS has higher primary stablilty. The Caribou has really strong secondary stability. Really strong and reliable secondary stability. To go along with this, we of course have a soft chined Soltice GTS, and a sharply hard-chined Caribou. The Soltice GTS doesn’t carve much of a turn even deeply edged. The Caribou will, which is especially well-pronounced when riding waves. And again, the Caribou’s stability remains really solid while riding on edge. I did all of my ACA instructor certifications through L4 in a Caribou S, and have done a lot of surf play in it. It’s a lot more fun and capable in that environment than most give it credit for. I definitely favor the Caribou for surf and for maneuverablilty.
I don’t remember which rolls more easily, nor do I remember any kind of difficulty rolling either one. I recently had someone just learning to roll jump in my Soltice GTS and successfully roll it several times as it was a snugger fit than their own. I’ve rolled the Caribou hundreds of times, in conditions, re-enter and rolls in conditions, all the crazy things you can imagine preparing for instructor certifications.
These are decidedly different sea kayak designs, and the Caribou is a fantastic all-around sea kayak.
I’m not finding my pictures in the Caribou on some wave faces. I did find an old one in my Solstice GTS. The Caribou is much livelier and easier to control on a wave face. But sit me in a sea kayak, and I’ll go find some fun! 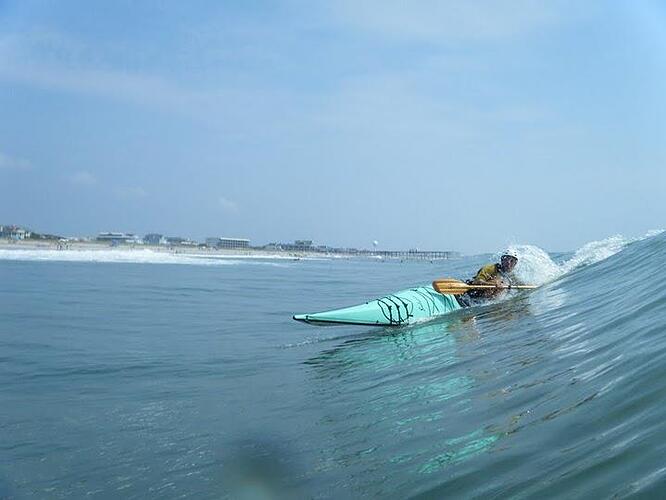 Here’s a couple of me catching waves in my Caribou. As you said, it’s livelier than a GTS in surf. I’ve paddled a GTS for a week on a guided trip, and it’s a really great boat, but the Caribou would be my choice in surf or in good sized seas. Caribou catches waves really good, too. It’s still my all-around #1 boat when I paddle. 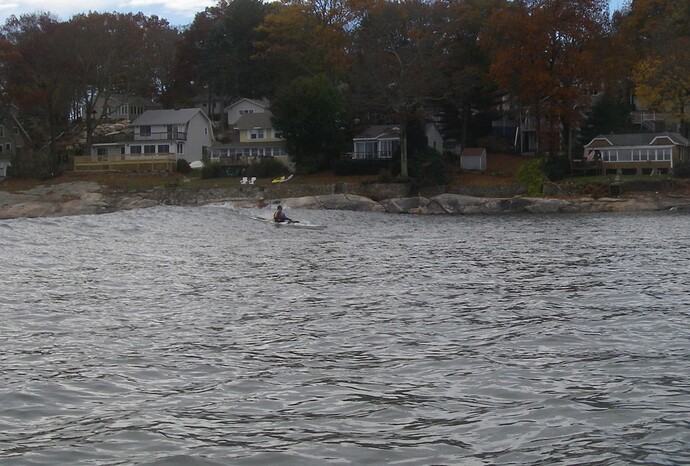 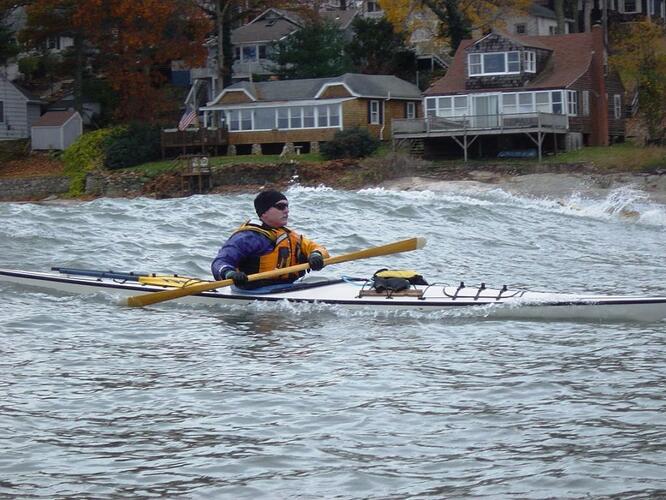 Lee,
Cape Fear sums it up very nicely. Of the more than a dozen kayaks I’ve owned over the years, the Caribou remains my all-time favorite. It’s just a lively, fun boat to paddle and I’d trust my soul to it in a hard chance. I gave it up only because the vicissitudes of the aging body made it difficult to handle a 52 pound boat out of the water. I’d give the ‘Bou an A+😊

Let me know if anyone wants a project kevlar Caribou. Needs gelcoat resurfacing on the hull, deck polish and new hatch gaskets. $350 Kayak belongs to and proceeds go to operationdeepblue.org

Deal & money spent for a good cause.

I appreciate all the feedback, especially the extensive feedback from @CapeFear . It actually sounds like the Solstice should remain my primary kayak, as I spend most of my time in calm, protected water. I mostly paddle for exercise.

That having been said, I am a bit of an N+1 collector…and find it difficult to pass up a good boat. This one is an '03 or '04 and is being offered at $800, nearby. I will probably buy it, and either integrate it into the fleet or flip it in the spring. Depends on how much I like it.

I really wanted to like an Impex Montauk that I picked up a couple of years ago, but it was just a bit low for me and didn’t feel stable enough. I’m sure that would have passed, but instead I sold it to someone who wanted it more than I did…

I’ll let you know how this goes.

Excellent decision. Good luck with both of them.

Well, I was one person too late for the Caribou. Sold before I could grab it. Oh well, it’s time to focus on the search for winter tires and wheels now anyway (new car in the fleet needs winter shoes) (although it’s a great time to buy kayaks!)