Has anyone paddled a Curtis Vagabond canoe, or do you know anyone who paddles one? I’m looking at a Curtis and I believe it to be a Vagabond based on it’s length, owner says it’s about 14’ 6". Anyway, I’ve never had the opportunity to try one. Any opinions, reviews, concerns, complaints? I’d sure like to hear them.

One of the better solo canoes ever made. If you are sized correctly for it you will find it tracks well yet is very maneuverable. Symmetrical rocker seems to be rare these days as less in the stern helps beginning paddlers track, but if your skill level is up to it the Vag tracks very nicely yet can handle twisty streams with ease. Great stability, both primary and secondary actually allows for some FreeStyle moves. (many FS paddlers who helped develop the ACA program actually started while paddling Curtis boats) As a general rule Curtis quality is very good. And since in the Curtis days they didn’t add decks to the ends you don’t get rot underneath as the water can drain out easily when the hull is stored. It is not a “playboat” for spinning around but is a great traveling, touring, day paddle hull. If condition and price are right, go for it! Assume you know, but in case not, the company is now called Hemlock Canoes and makes a slightly revised version called the Kestral. Specs nearly the same. Call and speak to Dave Curtis if you want the straight scoop.

I had a Vagabond for a while…I was storing it for someone else. It’s a fine boat. It’s quick and relatively fast. Curtis construction quality is excellent in my experience. Vagabond is a relatively small, low capacity boat. If you take it on a still pond and lean it until the rail touches the water you can spin it but it’s a lake boat and does not turn very well on moving water. Note that the max capacity is only 225-250. I had close to 275 in mine at one time and while the boat took the load bravely it was not happy…it made Dave Curtis chuckle since in principle it’s made for small people to help them keep up with bigger folks in their Nomads or now Peregrines (not for a guy over six feet with a 70 pound dog). I also had a Kestrel and a Peregrine at one time. I found that I prefer the size of the Peregrine even though the smaller boats are a bit hotter.

I had a Curtis Vagabond for a few years. Decent speed, tracking and maneuverability.

I sold it a couple years ago to taller people with wider wingspans, because the widest part of the gunwales on mine was in front of the paddling position and it measured 28" outside edge to outside edge, which is noticeably wider than my other solos in front of the seat. The new owners really like it and it sure looks beautiful and sexy when I see them paddling it across the lake now and then.

I took my only freestyle lesson in that Vagabond and it didn’t work out too well.

I also had a Bell Merlin II when I sold the Vagabond. The Merlin II had narrower gunwales in front of the seat, and they were aluminum, which I prefer for lower maintenance.

I still paddle and very much enjoy my Curtis Lady Bug, it’s much better suited for someone my size - 5’6" and 165 lbs. It is a fabulous multi-purpose solo and I seem to cruise as fast in it as I do in my longer “faster” solos and it maneuvers much easier.

If this Vagabond is reasonably near and you’re anywhere near the right size for it, I encourage you to go check it out. They are nice canoes, just didn’t fit me as well as my other solos.

Hey Yanoer, I appreciate your comment that the Vagabond has a relatively wide paddling station for you and I remember you making a similar comment about the Zephyr. Your comments surprised me since for me at a bit over 6 feet with long arms the width was never a problem but I worried more about hitting the capacity limits or even more practically just folding up my legs to fit under a Zephyr seat. So apparently they were made only for tall, skinny, and flexible people. I picked up a used Blackhawk Shadow 15.8 last season and every time I paddle it I end up bumping the rails with my paddle shaft.

TomL, you are correct. I also found the gunwale width in front of the paddling station in my Blackhawk Zephyr to be wider than I preferred. 26" outside edge to outside edge is about as wide as I want for a boat that I paddle level most of the time.

If the gunwales are wider, I’ll likely heel the boat a bit for easier access to the water for a more vertical stroke. For me, many solos are more easily controlled when heeled a bit, anyway, so this isn’t a great hardship.

The relatively wide gunwales and hull flare up front on the Curtis Vagabond and Blackhawk Zephyr are helpful for shedding frontal waves.

They are both nice boats, but others in my fleet fit my body and paddling activities better. 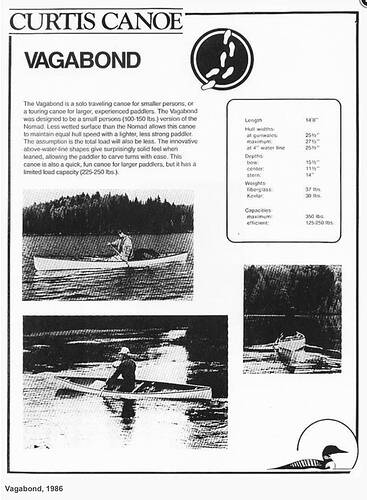 @Ozarkpaddler said:
Has anyone paddled a Curtis Vagabond canoe, or do you know anyone who paddles one? I’m looking at a Curtis and I believe it to be a Vagabond based on it’s length, owner says it’s about 14’ 6". Anyway, I’ve never had the opportunity to try one. Any opinions, reviews, concerns, complaints? I’d sure like to hear them.

John, just wondering if you have confirmed it was a Vagabond and if you moved on it. Never saw it come up on any of the selling venues.