Cute from a distance

I was surprised that this little guy was so calm with me about 6 feet away. It made a soft chirping sound periodically. 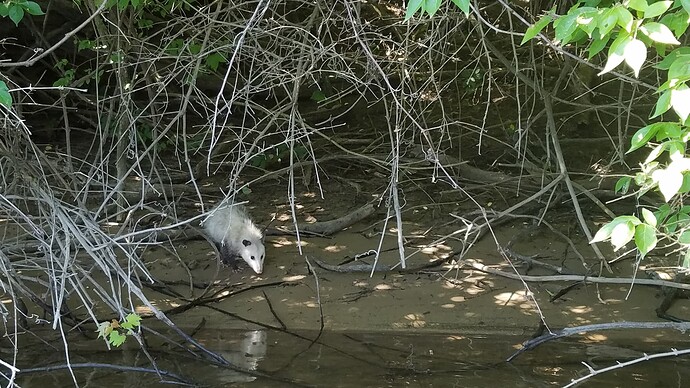 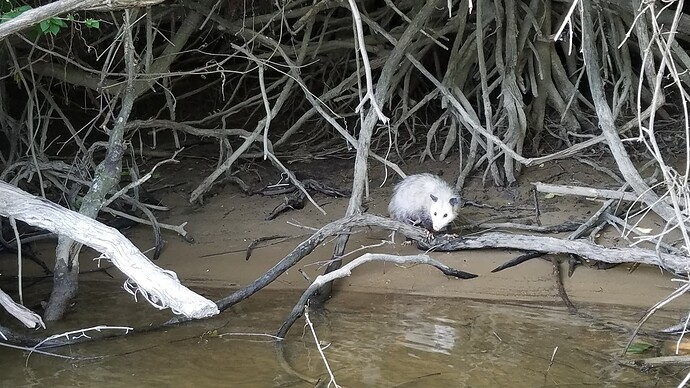 City possums are quite bold. They walk down the sidewalks late at night on rounds checking for garbage under steps.

My next door neighbor some years ago described the biggest rat he had ever seen that was cruising down the sidewalk out front in the wee hours. Neighbor was a very urban guy. I had seen that possum earlier in the season, don’t know where it lived but our block was on its rounds. My neighbor was quite relieved to find out it was NOT a giant rat.

My boss in Houston Texas was a New Yorker. We had armadillos everywhere. His daughter told him she had seen a dead armadillo with no armor. We also had possums. Not a lot of either where they were from.

I think possums are pretty cool and enjoy seeing them, especially up close. We have them around but don’t get to see them very often, especially during the day.

They come right up on my porch and eat cat food, sometimes while we are sitting there. Unfortunately, so do a couple of skunks. Pays to turn the porch light on and look before you open the door.

I see them sometimes but not as much as I would like. Both my properties are smack in the middles of major peri-urban wildlife corridors so the yards are infested with ticks due to the populations of mice and deer. One of the huge benefits of possums is that they love to eat ticks.

I have several cozy nooks that wouldbe great for possum dens but unfortunately, the raccoons and groundhogs have claimed them. I have had to staple 1/4” metal mesh around the 10” elevated lower deck and wrap the twin evergreen’s’ trunks that flank the back porch roof with barbed wire to prevent raccoon from nesting and partying in both locations. Based on the scrabbling and clunking I heard outside my bedroom window the last couple of nights, one of the adjacent trees out back must have extended a branch that bypasses the barbed wire. There are fresh raccoon turds in the box gutters so I need to make the rounds with the pruning loppers.

I am always delighted to spot a possum. They are such an ancient breed of critter, unchanged for 10’s of millions of years, having scurried between the toes of the mighty dinosaurs. When I used to spend weekends on my ex’s woodland acreage in northern PA there was a mother possum with babies who used to show up regularly to scavenge cat kibble from his covered front porch. Possum kits are charmingly cute and it was fun to watch them pile onto Mom when snack time was over and she trundled back to the meadow.

@Celia - if your neighbor is more afraid of rats than possums I bet they’ve never seen a possum’s teeth! Not sure why they need long sharp teeth.

@tketcham - you bet I feel lucky. Got to hang out with that critter for at least 5 minutes. Wish I could share the videos that include a gentle possum chirp every 5-10 seconds. Maybe staying in touch with mom?

@Paddlinpals - sounds like possums are smart enough to appreciate free food. If we left food outside I think we might get more visitors than we really want.

@willowleaf - yes awesome that they eat ticks. I’ve already had 3 encounters with ticks this season. Totally agree that possums are just delightful creatures.

We lived in a swampy subdivision in Houston. The houses were built on imported sand. The lot next to us never had a home on it and when it rained was a swamp.
The first year we lived there, I killed 8 copperheads in our back yard. A king snake met the in the garage one day. I suggested he get out and reduce the copperheads.
I fed our cats in the garage and it started sounding like a cat fight every night. I finally found the culprit, an immature possum, hiding in the motor compartment of the freezer.
I tried to get him to play dead but he acted like he wanted to chew my hand off. They have impressive teeth.
I finally lassoed him and pulled him into the cat carrier and turned him loose a couple of miles away.

Why did the chicken cross the road? To show the possum it could be done.

I have a friend in Katy, TX who went into her garage to get an empty box.

It wasn’t really empty because it had a possum in it that promptly attacked and bit her.

She ended up having to get the old school rabies shots, twenty nasty shots in her stomach.

Those Texas possums are tough!