Cutting a Kayak in half

I am one of those guys who made a really dumb mistake . Recently bought a kayak and had it shipped to my house. I inspected it when it arrived but for some idiotic reason I missed two gaping holes punctured in the side.

However they want me to cut the kayak in half and send them pictures — Proof of death pictures, I assume, to ensure I am not trying to get a free kayak.

This makes sense to me since I assume they wouldn’t want to pay ship for a wrecked kayak back.

But does the “cutting in half” seem ok? Just looking for a gut check before I break out the chain saw

Have fun… cut it… Take pics before and after…
I’ve seen companies require cutting the area around the serial# out and sending it back to them.
You want to inspect the areas where a forklift might be in contact. Some shipping companies just don’t give a crap.

I’d be sure to get that in writing before I commence cutting.

I would use a saws all , reciprocating , with a wood/metal blade . The 6" blade would do it but the 10" demo blade would be more dramatic.

Of course I know a utility contractor that had two poly boats cut like that and he did an HPDE welding job and put them back together.

Not uncommon. Though one of the big brands used to just ave toy cut out the hull id number.

After you cut and take photos, then start disassembling the brackets and hatch covers and such. Keep them as spares.

Is this a fiberglass boatr? If so, if you cut in the right place - either right in front of or behind the rear bulkhead - you can repair the holes, add another bulkhead and make a two-piece boat out of it. Check online for information about this process.

I had a canoe that was destroyed in a car accident. I went through the insurance company (the canoe was insured) and they required the same thing. The insurance company actually sent a roll-back truck to pick up the canoe. Kind of hard to secure a bunch of pieces of Kevlar and wood to a roll back.

The guy who was in charge of Valley distributors in the US at one time, out of the Great Lakes, used to require the broken up kayak to honor a return.

The reason for this is unscrupulous dealers who will try to resell a kayak that the outfitter already proved to the manufacturer was damaged and got reimbursed for. It should not happen but it does. In fact subsequent to the time that guy I mentioned above was handling Valley imports, my husband bought a used kayak from a dealer in Rhode Island that was a poster child for this problem. They kept redoing the outer gel coat every time it came back to disguise a structural flaw in the layup. When the issue started to show up, my husband and I happened to be at the first place that had gotten it in for sale. The first outfitter had spotted the problem and returned it to the folks handling Valley then. Instead of discarding it they threw some gel coat on and sold it used. Jim was made whole for it by Valley, to their credit, and figured this time the importer would trash it.

Unfortunately they added some gel coat and sold it again. More unfortunately for them, the boat with its new owner showed up at a symposium that Jim and I were at a couple or three months later. And the third owner was a lawyer. As far as we knew he got a new boat and the problem child was finally broken up.

I know a fellow who used to paddle a “glass-bottom” canoe. IIRC, there had been a warranty issue, and the canoe-maker required a roughly 2’x3’ section of hull be returned to them. The fellow did so, then proceeded to crudely patch the hole with plexiglass. It wasn’t a very good patch, but allowed him to use the slightly-leaky boat for years.

So, as others have written, it is not unusual for boat makers to request warranty seekers to do something that ensures the boat is taken out of use.

You can make a nice planter box / raised garden bed by cutting out just the top deck, drill a few drain hulls in the hull.

@Tom-M said:
You can make a nice planter box / raised garden bed by cutting out just the top deck, drill a few drain hulls in the hull.

Or you can sell both parts for half off the price.

The ends of the Circumnavigate Trail in Florida are marked with halve of a kayak vertically burried as a post.

Scroll down to Camille Richards. She is shown standing next to the “half kayak” .

… or use it as a ‘signpost’ to the ‘Gales of November’ event (Agawa Bay, Ontario).
(was in one piece until unfortunate event near the Sand Island caves (Apostle Islands).
(circa early '80s) 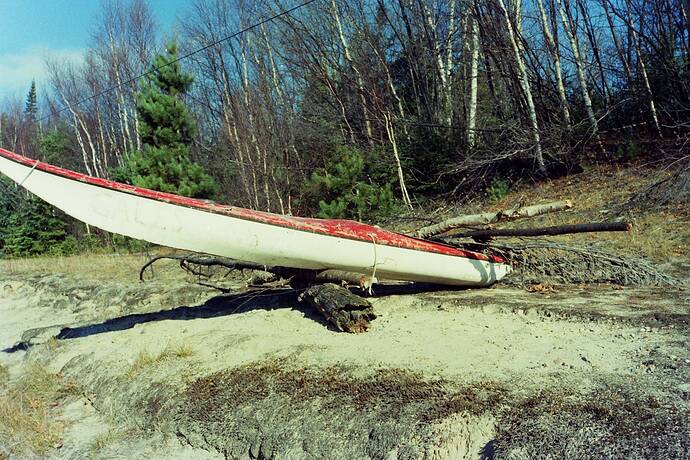 That was the usual way to fly with a expedition kayak before sectional kayaks became commercially available. Cut them in order to fly, carry some glass and resin for when you got there.

Same with Greenland paddles. The paddle was cut at a long scarf {wood Greenland Paddles} then glued upon arrival. usually was left behind after the trip was done. The first 2 piece Carbon Greenland Paddle {Superior Kayaks LLC} changed that . {introduced in 2006}

Celia, for reference “the guy who was in charge of Valley distributors in the US at one time, out of the Great Lakes” … is Stan Chladek a great guy

@vcherbert I know who it was. I was trying to keep names out of it. Those who have been along a while will have caught the drift.
I heard he was a bit of a curmudgeon but as solid as the earth. Never had the chance to meet him.