I planning to buy my second kayak and I narrowed down my options to DAG MidWay and RTM Tempo. I plan to use it almost exclusively during warm days in summer and on sea and I don’t have a need for big storage space. Please, could someone answer the following questions or help me decide in general? I’m especially interested in:

If you have any more comparison or comments I would be very grateful if you could post them as well.

I don’t have any personal experience with either of these kayaks, but they do look quite similar in size and shape…

With them being less than 3" different in length and less than an inch in width I really can’t see there being a discernible difference in speed between them even if the Tempo looks to have a slightly longer LWL, while the Midway looks to be better able to handle rougher water… And unless the hull profiles are radically different I don’t think there’ll be much difference in stability or even tracking although the Tempo might be a bit more susceptible to sidewinds.

Two different rides completely–Regardless of the specs. The Tempo’s hull is molded after the classic Scupper Pro SOT, a boat I had for a few years and got many enjoyable miles out of. The Tempo/(Scupper Pro) is fish-form with all the bulk up front-You notice this when paddled. (I could provide pics, but they’re on an old desktop computer). It is a great boat for flat water cruising and to use as a fishing platform(Indeed, the Scupper Pro was THE one-and-only “kayak fishing” boat before kayak-fishing became all the rage it is today.) You would find a distinct difference from the Midway, which handles more like sit-in kayak. The Tempo/Scupper gave me some good (but heavy handling)ocean surf rides. It also took a sail quite nicely. If you do a lot of multi-day, multi-mile expedition paddling, it is NOT the boat for ease-of-use, but it will carry a good load of supplies on top, and it just fine for day tripping. Now having once also owned an RTM Disco(the Midway’s dicey little brother) I think I can safely say the Midway will pivot in waves easier and track just as good as the Tempo. The Midway will slice along in chop more like a sit-in kayak. Both are somewhat wet rides(all SOTs are, but hey, kayaking is a water sport;-) “Unsinkable?” I’ll say yes, but not “un-swampable.” You wait a while for the scuppers to do their thing, but they clear without need of bulkhead. Stick scupper plugs or foam ping-pong balls in the scupper holes if h2o bothers you…At 200 lbs, I wouldn’t hesitate to use either boat(I sold the smaller RTM Disco when I hit 200 lbs., now that I’m a consistently trim 185, I wish I had that fun boat back!) In a nutshell, the Midway should leave you plenty of free board if you don’t get much heavier; AND allow your skill set to grow into without any feared “tippiness” once you get use to things. So needless to say, I’d go with the Midway.

Thank you for the replies!

Here are a few pics of my old Scupper Pro. It differs from the RTM Tempo, in only that it has an additional rear hatch and not a tank well like the Tempo (In retrospect, I probably would’ve preferred a tank well over a hatch.) 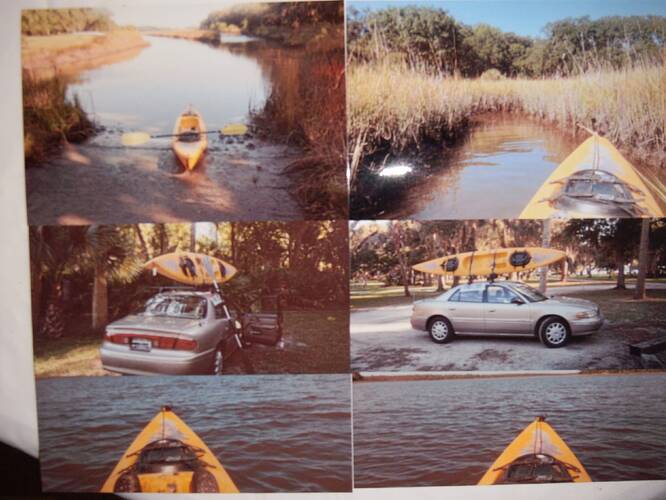 I own a scupper pro and regularly use a Midway. If its your second kayak I’d go for the Midway. Faster and lighter and enough storage. Less primary stability but more secondary stability. For fishing I’d go Scupper pro (Tempo) . By the way the early Scupper pros had 2 hatches but most models have front hatch and rear tank well just like the Tempo.
Q. for spiritboat : I’ve seen a Disco for sale and am considering buying it for multi purpose use to replace the Scupper Pro. I Will use it for day tours, maybe overnight / camping and general fun on the water. Would it feel much different to a Midway ?