I just got a '98 reflection 15 that has had some unusual outfitting. There are a ton of holes in the gunwales, it looks like this thing had as many as 4 seats in the past. That being the case, I don’t know which holes were from the factory.

I want to put in a center seat for solo use for river tripping. I sit 90% of the time, and weigh 230 lbs. Does anybody have one with the factory center seat? The closest holes in my gunwales are 109" from the bow. That’s 16.5" back from the CG (92.5" according to balancing on sawhorses). This seems like way too far back, right? Looking at the '96 catalogue, page 11, the seat looks to be about 1 seat width aft of center, or about 100".

There are no hard and fast rules, but I would say that you generally want the front of your body plane to be just aft of center. That gives you a slight bow light trim. If you are kneeling the seat will be a little further back than if you are sitting, but if the front edge of the seat is 16" back that seems like a lot to me.

Others will weigh in that know more.

I have a reflection 15. It has the third seat. I’m not sure if it was factory installed or by a previous owner. The middle seat front seat bolts are 9" behind the yoke holes. The yoke holes were empty when I got the canoe. I installed a Mohawk web yoke. It works great, just roll it up to get it out of the way when using the solo seat.

I would say that you are probably correct in your assessment of where to place the seat for solo paddling the boat unloaded.

But you said that you are planning to use it for river tripping. Does that mean only day trips with no or a very light load? Or will you be carrying a significant amount of gear?

The reason I ask is that some solo river trippers will set up their seat significantly aft of where it would be to trim the canoe unloaded. Sitting your legs will take up a good bit of room in the forward half of the boat and placing the seat further back will sometimes allow for a better balance of gear to be stowed in front of your feet and behind your seat.

On the other hand, I would not place the seat so far back that you cannot get your paddle blade into the forward quadrants of the canoe and prevent you from using bow steering strokes.

You can find the best spot for your seat by laying a 2" x 6" board across the gunnels and sitting on it while floating. Have a helper with a good eye look at you from the side and move the board until the trim suits you.
You can use a carpenter’s level if you want it perfect.

Thanks for the advice guys. I ended up putting the front of the seat 10" aft of center, which seemed to roughly match the catalogue photo. The boat trimmed pretty much flat, maybe slightly bow light, with just me in it.

It was hard to reach over the gunwales while sitting in the middle. Maybe a sliding seat would be better for trimming on trips? We usually do 2-3 day trips, and pack pretty heavy (beer, no dehydrated food, etc).

Aft of center is the way to go. Especially if you’re over 200 lbs.–I have a Reflection and have since installed a foam center saddle instead of a center seat(do a bit of whitewater up this way). But here’s a pic of me paddling it before the install, note how far back I am kneeling.
(I’m 187 lbs., but once weighed almost 220.) The boat was empty on that day(no camping supplies/beer:). 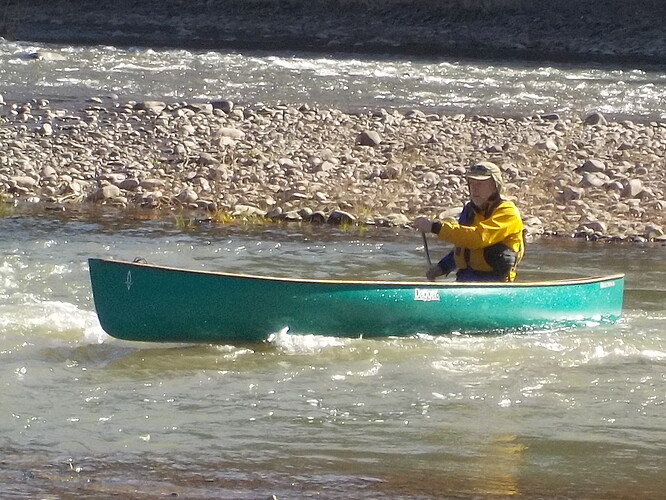 I, too, own a Dagger Reflection 15 that I solo. I installed a kneeling thwart which is centered at 20" aft of the portage yolk. That position leaves me the room that I need without taking out the yolk, but I am fairly tall and have a long reach.