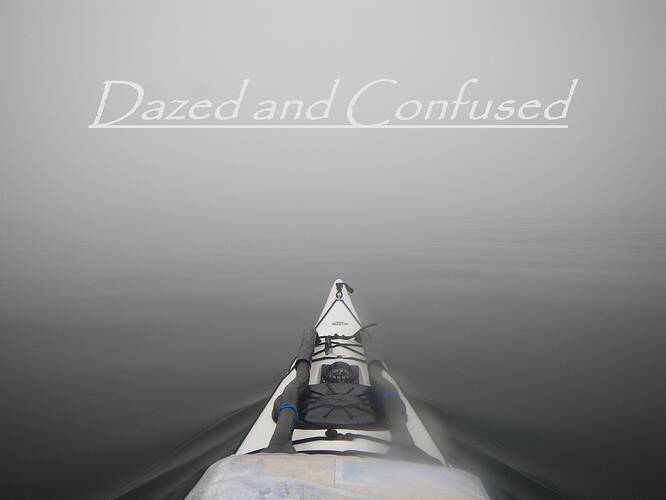 As hard as it was to be facing another day of paddling in fog, I knew that this was my one weather window to cross Queen Charlotte Strait for many days to come and I was ready to get back home. The fog seemed even heavier than it had been for the past two days and those two days had been decidedly un-fun. After thirteen days without rest and two days of pressing hard to get here to make this crossing I was spent and had to give myself a pep talk in order to leave the beach. The wind and seas had been up keeping pleasure cruisers at anchor but, as forecasted, conditions had subsided for 24 hours and were expected to return in the afternoon. Fog or no fog it was time to go.

Everyone knows that the shortest distance between two points is a straight line so we tend to lay out our courses between those points using a series of straight lines and shallow angles. In this case my points were Shelter Bay and Bear Cove which involved a 16 NM whiteout crossing of Queen Charlotte Strait.

My course consisted of three primary legs with negligible course changes but three significant intermediate crossings. The first approximately 5.3 NM from Shelter Bay to the Deserter Group, then 2.5-ish NM from The Deserters to Bell Island and finally 3.5 NM angling across Goletas Channel to Duval Point.

I planned for the ebb to be changing to flood about midway through the first leg and figured that it should about equal out so I didn’t change my course legs. If the fog didn’t clear I would just adjust headings to achieve my desired course-made-good. My GPS was set to display speed, course-to-waypoint and heading, however, I would take my heading from the deck compass.

That first 5.3 NM to the Deserters crosses a major shipping lane and is an enormous tidal passage. I would be making that crossing in a complete whiteout and thanks to the Raven that destroyed my antennae I could receive but couldn’t send to alert shipping traffic of my whereabouts. At 7:30 AM I left for Port Hardy on a heading of 180 degrees. 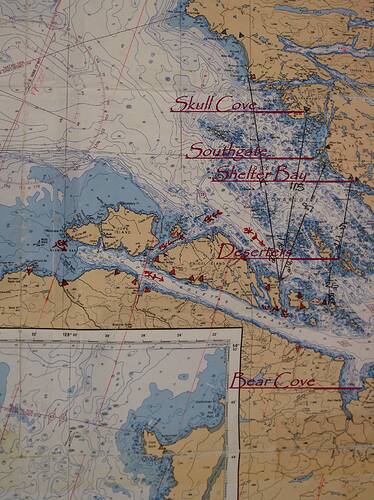 Things got pretty strange from the very beginning as I struggled to maintain my heading and reconcile it with the constantly changing course. I can hold my focus on the deck compass and maintain a heading for hours but when I look down at my GPS for the speed and course I get dizzy and it takes a bit for my eyes dial it in and longer to digest the information. In the meantime, my heading changes, correct, repeat, repeat, repeat. I was pretty certain that my course was falling well short of being a straight line.

Several times I heard powered craft making the same crossing. Only once did the fog and their close proximity allow me to actually see a boat as it motored past unaware of my presence. The rest of the time I listened carefully and tried to located them by sound.

The leg from Shelter Bay to the Deserters should have taken a little under 2 hours. When my time en route passed the 3-hour mark it was the second clue that my course was far from ideal. At that point I gave up worrying about my course and just paddled a 180-degree heading knowing that whatever the current did with me I would eventually bump into a shoreline and figure out a course correction at that point.

Gradually the dark grey lightened and my desired waypoint emerged in the distance. I was on track! I couldn’t believe it! I didn’t have to stare at my compass for a while! I couldn’t wait to be done and give my mind and body a rest from paddling. 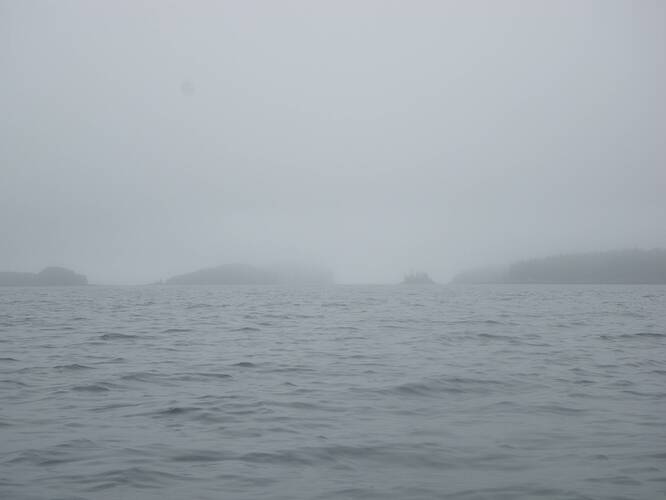 The Deserters
__
It was another 4 hours from the Deserters to Port Hardy. During that time the fog lifted to form an overcast and then dissipated altogether giving way to a bright sunny day. The westward flowing ebb that had confounded me gave way to the flood and a west wind began to build in Goletas Channel providing a bit of a nudge on the final push.

It wasn’t until I downloaded my GPS track that I realized how much the current and zero visibility had messed with me. I had turned my 16 NM course into a 17.1 NM journey. 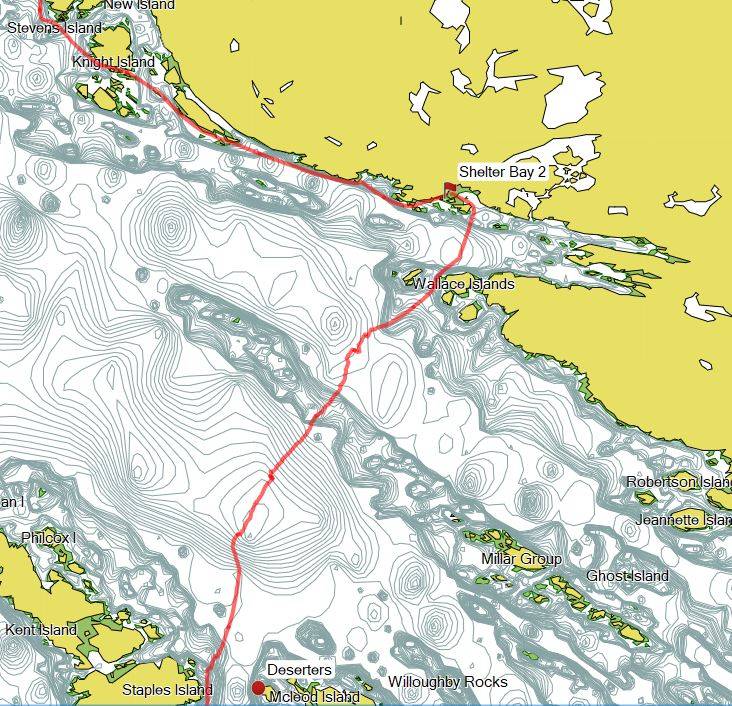 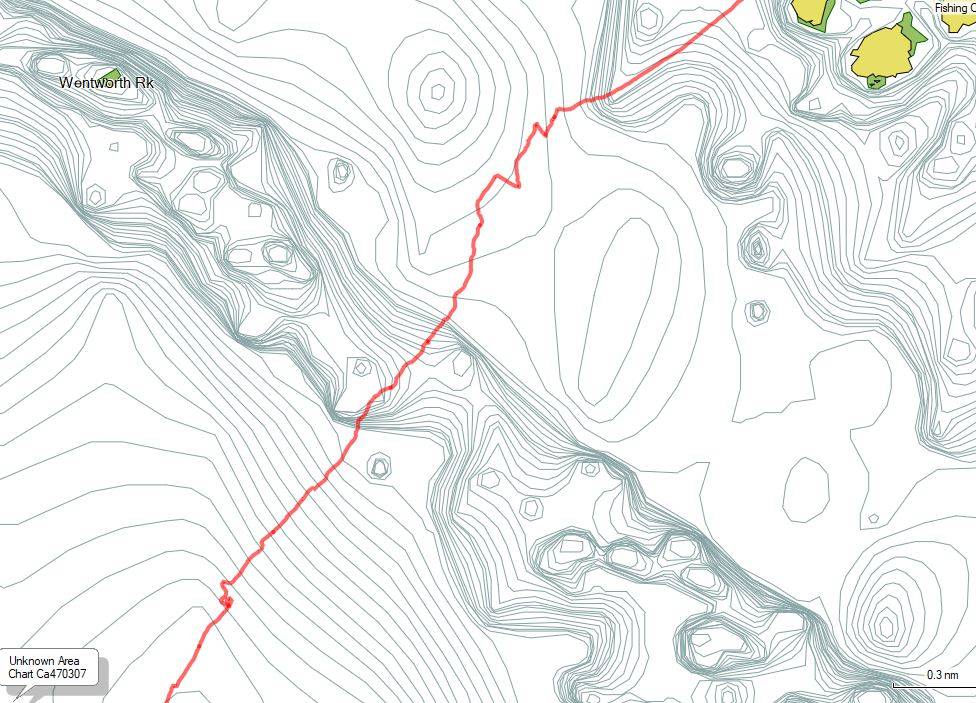 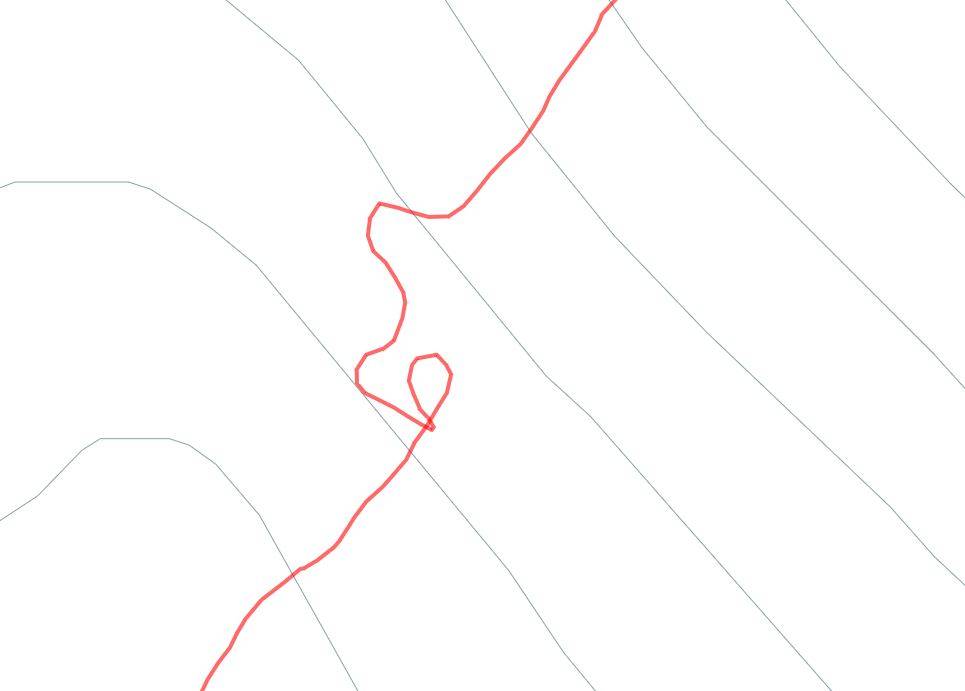 Great story - thanks. You can tell from the track when you were checking the GPS. Did you know that you paddled in a circle at the time.

Quite an adventure under adverse circumstances and especially having so many days of intense paddling.

Erik beat me to the question about the circle.

I had no idea. That circle took a little over 3 minutes to complete. The whole time I was maintaining a heading between 145 and 205 degrees. My speed to the Wallace Islands was the typical 3 kt I expect but during the first crossing to the Deserters dropped to less than .5 kt to 1.5 kt. From the Deserters to Bell Island my speed averaged 2- 2.5 kt. Once into Goletas Channel I was back up to 3 kt. I was pulled around in that circle by the current all the while facing between 145 - 205 degrees with no clue what was going on but trying to interpret the data from my GPS.

Great story !
The most I have done in a fog was 5 nm from Kimball Is to Stonington
Very scary with lobster boats working and no real accurate way to measure tidal drift. We did not have GPS
I was so happy to find nun 2 Looked at the chart
2 nun 2 s about a mile apart
Figured that with our inability to trianulate curent we were at the farthest west
Recalculated bearing and an hour later we were at the car

Playing chicken in the fog with commercial boat traffic is a bad idea.
There is a fine line between adventure and bad moves.

I don’t disagree with you.