I’ve done winter outside in a few climates ,but this is bone chilling. 40° and drizzle , called winter in SC , is about as miserable as it gets even with protective clothing.

In high school, I rowed. We would be out in any weather, as long as there wasn’t ice on the lake. Snow, rain, 30’s, didn’t matter.

I am now a 100% fair weather paddler. No chance I would be out in the 40’s and rain if it wasn’t in the middle of a multi-day trip

Go out down to 30°F air. When out like that 15+ mph wind and my back was not warm. Saltwater was freezing on the deck. Needed another layer in drysuit. Not horrible just not comfy!

I live in the mountains of Colorado, where “cold” is really dependent on the amount of sun. I’ve worked in a t-shirt outside in single digit temperatures multiple times, as long as the sun was shining. I was in -8°F yesterday but it was cloudy, so it felt all of -8°. My wife is a CO native, and her temperature scale progresses from Cold, to Gunnison Cold (the next town over which spends an inordinate amount of the winter below zero), and then ultimately Georgia Cold. My folks live in north Georgia and when we visit at Christmas time, it is often 30 to 40 and drizzling. Georgia Cold must be the same as SC cold, which with humidity is way worse than CO cold!

I have this stuck in my head from a bicycle magazine in the 70s: “Winter begins at 50 when it rains”.

I’d rather be paddling in snow at 20 than at 40 and rain. I’ve had the dubious pleasure of being out in freezing rain a couple of times & it’s the worst.

You can buy a heated vest, sweatshirt or jacket powered by a rechargeable battery. I’d suggest a vest. They sell some at Home Depot or check out gerbing.com. Try it you’ll like it.

I suggest staying inside when it’s 40 and raining. I’ve hiked and camped in the dry Colorado conditions and loved it. I was a lot younger then.

Coldest day I’ve done was a downriver run, poling, and I had to switch to a wood pole because the aluminum was just too cold through my 5 mm neo gloves. Water dripping off the pole turned to ice, water in the canoe turned to ice, icicles on the thwarts. Watching my kayaking buddy catch a wave in his face and his reaction was entertaining. I labeled this the “day that never warmed up” as it just got colder, ending in single digits.I’ve paddled through snow squalls, little ww gem in a valley, out of the wind and actually pleasant…come home and been unable to untie the boats as the lines were frozen. Never stopped us, as long as we could find a takeout, which generally ended up being in a cl.2 stretch as the flatwater was frozen over. State police stopped at a paddle buds house one day, reporting to his wife they found his Jeep in the snow alongside the river…yeah, we were out paddling, situation normal. Did this for years, a friend summed up his winter paddling preference saying “we’re all competent, no river dorks, no tubers, no fishermen” and snow on top of the rocks, and a rim of ice around them is really pretty. Then one day, I asked myself “why”…and switched to dryer, more heat generating, land based activity. In the twenties today, wife just asked if I’m going to the club to shoot…outdoors. Ya’know, I think I will. Nothing like a warm barrel on a cold day.
Something I did when I paddled cold days and can recommend is a thermos of hot water. Fill your neo gloves with the water from time to time, helps your hands get through the day. My feet were never cold (thick socks, drysuit, mukluks), body never cold, but the hands appreciated the heat.

Sleet and freezing rain around 32 degrees kills people.
Colder weather with snow is easier to deal with.
I had an outdoor career working outside in all seasons and extreme climates.
There is no bad weather only bad clothes.

One year when I was doing research in a lab at the University of Minnesota hospitals I decided to ride my bike to and from the hospital very day of the year no matter what the whether. On December 19, 1983 I rode home in the evening when Minneapolis was reporting a raw temperature of -30 degrees F. and there was some wind. The reported low that night got down to -34 F. That was the coldest temperature I have been exposed to outdoors for any length of time. Pretty cold. Water too hard to do any paddling.

Just a couple weeks ago I was paddling in nice, calm 40 degree weather when it started raining. Even the fishing boats bailed out and took off. I had to paddle a few miles to get back to my put-in and enjoyed a hot bubble bath when I got home. A little colder with snow is much more enjoyable.

Not too bad today for our near solstice urban paddle in Lansing, Michigan. Air about 35 deg, gray skies, bit little wind. 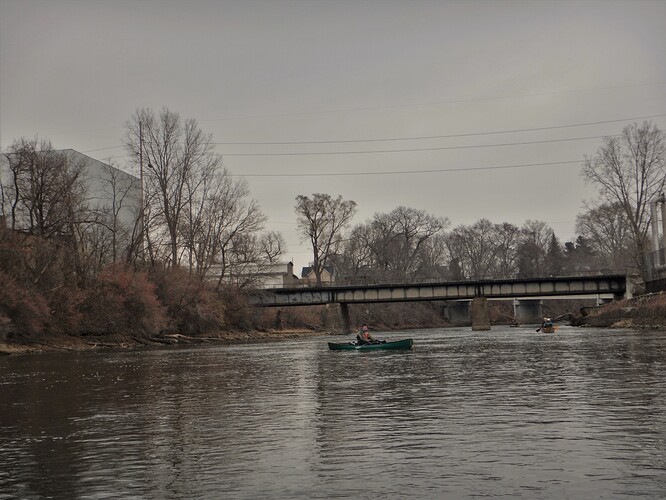 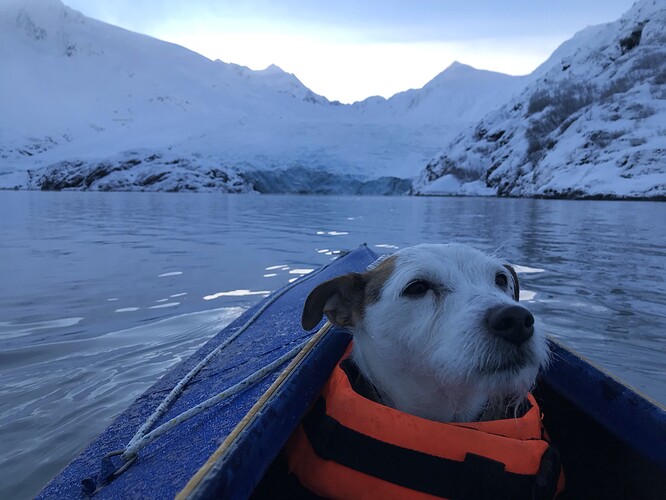 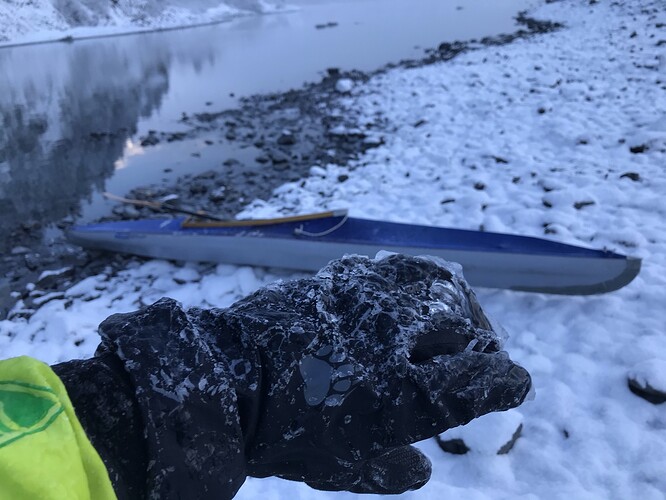 image2048×1536 523 KB
single digits last week on Portage Lake. I picked up this old Klepper over the summer. Had a foam pad and blanket on the floor for Paris. Kayak gained about 20 lbs due to ice buildup 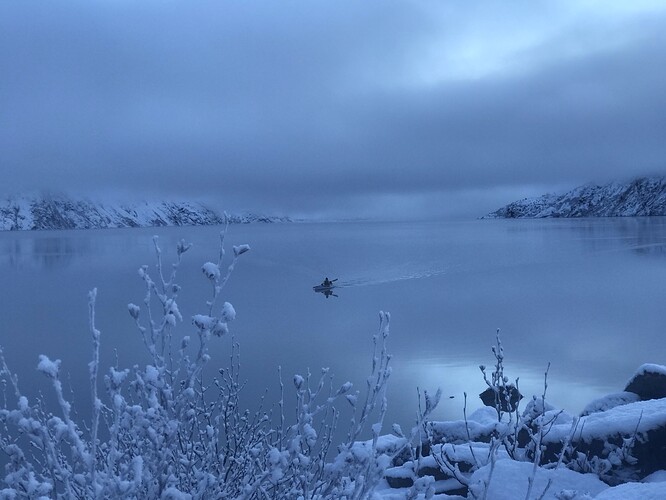 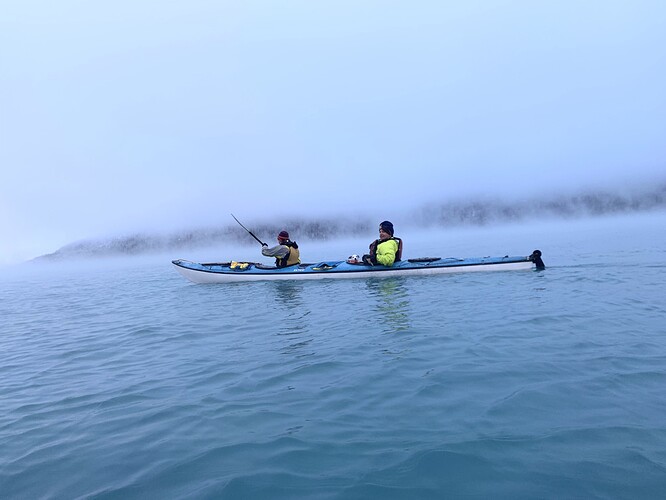 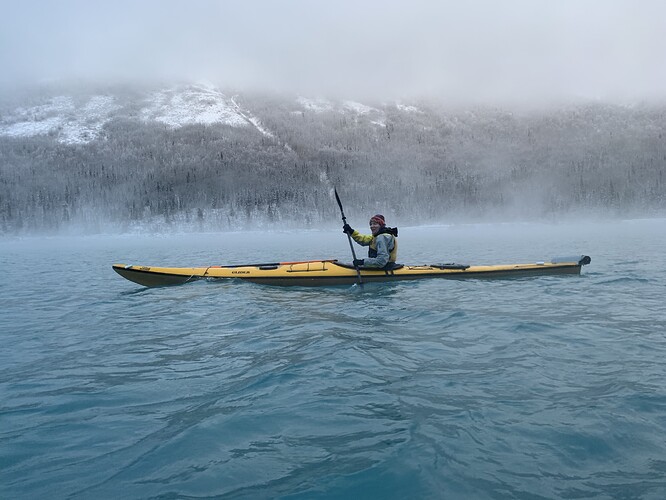 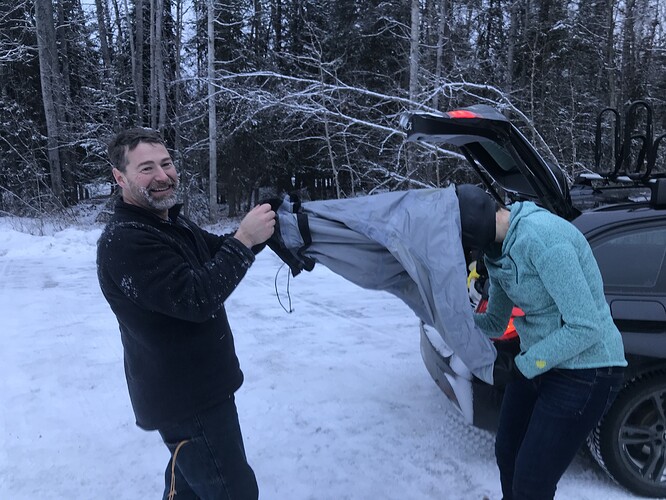 Kayaks or canoes with covers have a great advantage of covering up the lower body. A wet suit or dry suit, head covering and good gloves can make bad weather seem unimportant.

The colder the water the more people must wear PFDs, dress for immersion and practice self-rescue and the rescue of others.

A Native American acquaintance says: “The weather is not good or bad…it just is.”

About 12 years ago I went skiing in Vail CO for a week. A couple days were overcast and 0F - 10F warming into the 20s with overcast still. However, the coldest my friends and I were that week was after stepping out the door from airport baggage claim into the windy, misty, humid 54F air of Jacksonville FL. We still had cold weather jackets on, but it as if they served no purpose.

When the humidity freezes out of the air everything seems warmer. I’ve worked in a tee shirt in upper state New York. The air was dry and calm and it was comfortable.

I have to agree with Hank, Jacksonville is the coldest place I’ve been, or it feels like it. The cold, wet and windy cuts right through any amount of layers.

Another difference when paddling is the water temp. The first race of our season is the Silver River. One morning it was in the thirties when the race started. I was dressed to be comfortable in that, but that 72 degree water caused me to over heat.

High humidity at 40 deg is what we called “raw” in New England. Bone-chilling stuff.

We rarely get that rawness here in CO, though it has happened, same as with muggy heat. That’s good enough odds for me.

I remember standing outside in full winter sun, mid-morning, at our former house, in steep foothills country. Wearing only a t-shirt on top, I thought it must be almost 60 degrees. WRONG! It was only about 40. The steep, close ridge sides covered in snow bounced the light all around. I wonder how much of our cold perception is not only physical, but perceptual, based on the visual scene around us.