Looking for a website that lists kayak values similar to the NADA boat website. Looking at a Boreal Design Esperanto 19 foot poly sea kayak, year unknown, for $725.
Pictures look like it is in very good condition. Comes with cockpit covers but no spray skirts or paddles. Assuming it is in very good condition and not more than 10 years old, any guess on value should a kayak value website not exist?

Sounds good. Kayaks are not traded like cars and do not change every year… 725 is way less that 50% of a new one. Tandems may be harder to sell used. Make sure the hatch covers and seats are in good shape.

How has the boat been stored? Be very careful to look at the bottom for warps. sight down the keel and the deck to make absolutely sure the boat is straight from end to end. Polyethylene boats can become crooked. Unless you are interested in paddling in circles, do not buy a crooked boat.

Year is on HIN NUMBER back of hull

Me 7 years half it’s value when purchsed. Then down from there.

I think a great deal depends on your location and how active the used market is. Good sea kayaks don’t pop up every day in my area, and performance tandems are quite rare. Assuming it’s in good condition that would be a good price IMO.

Thanks. Here are some photos. Only interested in the red tandem. Does the rudder look bent in photo 4? 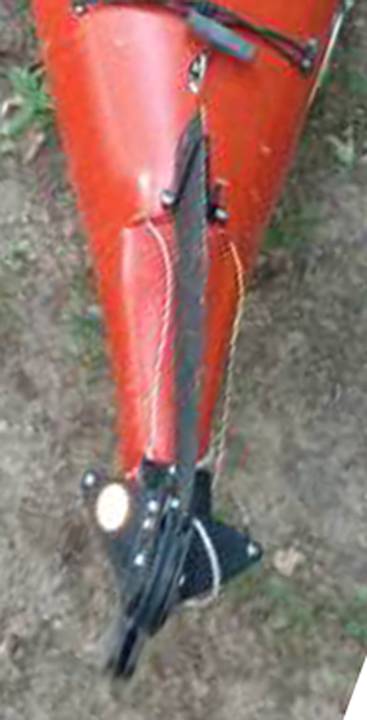 I doubt it’s permanently bent, but it appears to be ‘loaded’ to that side. With the rudder in it’s beeper it can’t pivot like it’s supposed to. I’d ask the seller to be sure. I don’t know what the white wire/band/line on the starboard side of the rudder bracket is, though.

Tell owner to bend it back. See if parts are available to replace it or entire rudder.

Seat and rigging hatches check. If he took a picture to sell it with water lying in the cockpit covers it was not treated like a queen. Bend aluminum rudder back may make it a bit weaker. Going to be a heavy boat are you up for that? I guess 85 lb. or more. No bottom pictures? Asking 725 offer 625.

Year on rear of hull he can send you a picture of it.

He was asking $795, negotiated to $725 but with concerns raised here (thank you all) he reduced price to $600.
Told him where to find S/N but said he couldn’t find it. He is taking a second look. Will ask for photo of S/N and of seats. Having to replace the rudder and seats would make the kayak almost worthless. Weight not a problem. We have an Old Town Loon 16 ft tandem. It’s a tank. This one will be a little lighter and more hydro dynamic.

Etched in plastic with Dremel type engraving tool. Hull at stern below seam. Don’t panic and buy a headache. Nieghbor bought small power boat 3500 I said offer two grand. He brought it two days later one up the block similar for same price in way way better shape with a Bimini top. See boat in his driveway and trim pump is shot from rust. When it blows soon it’s easy grand to fix.

HINS required on all boats after 1972

Thanks for all the help. Passed on the kayak. It was very old, very faded, had brittle buckles, torn straps, and the “black” fabric seats were a faded gray. Found the exact same kayak, a 2012 Esperanto, in much better condition for sale at a company that runs sea kayaking tours for $250. A little banged up from rocks but not bad for a 6 year old kayak.