Determining worth of my kayaks

Hey everyone. I have a question I hope someone can answer. I was given 2 used ocean touring style kayaks about 6 years ago from a friend. I have used them a few times but need to sell them, along with the rack and accessories. I have no idea how much they are worth.
They are a 17’ Northwest Kayak SynergyHV Some sort of fiberglass or composit material
And a 16’ Wilderness Systems Sealution also some sort of composite or fiberblass material.
They are well used but I had them checked out when I got them and they are in very good shape. I have zero idea how much these would have cost nor how much they are worth used.
Any insight would be helpful. Thanks!

If you can tell us the last two digits of the hull identification numbers (usually on the side at the stern) that would give the year of manufacture. But assuming they are both around 20 years old and have no issues (rudders/skegs work, hatch covers good, bulkheads not leaking, gel coat still glossy, etc.) I think people would put those on Craig’s List for $800-1000 in Maine, where I do most of my looking/shopping. The final selling price might be a couple of hundred lower. But so much depends on condition and current demand. Right now, at the start of winter, any shopper is going to expect a super-bargain.

I have no idea the year. Here are some photos. One kayak has an identification number I can find but its hard to read. The other one doesnt have a number I can find.
They work fine and were given a once over by a shop when I got them several years ago, minor repairs were done - I think just replacing some cord and stuff. Ive only had them in the water a few times and they have been mostly covered by kayak covers the whole time on a rack.
Theres no leaks and everything on them works.
Looks like I can only post one photo 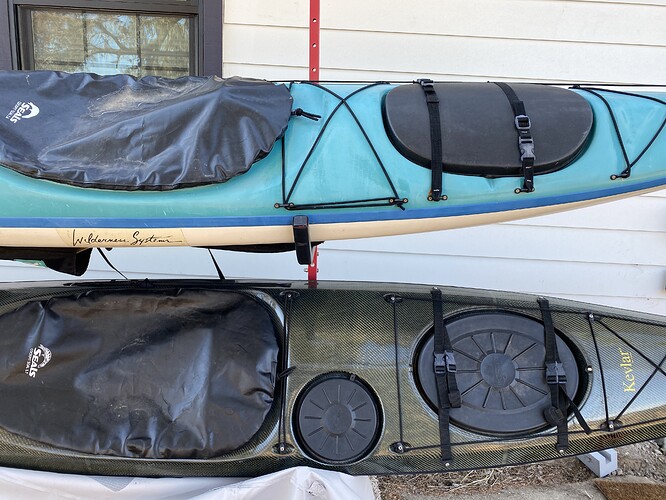 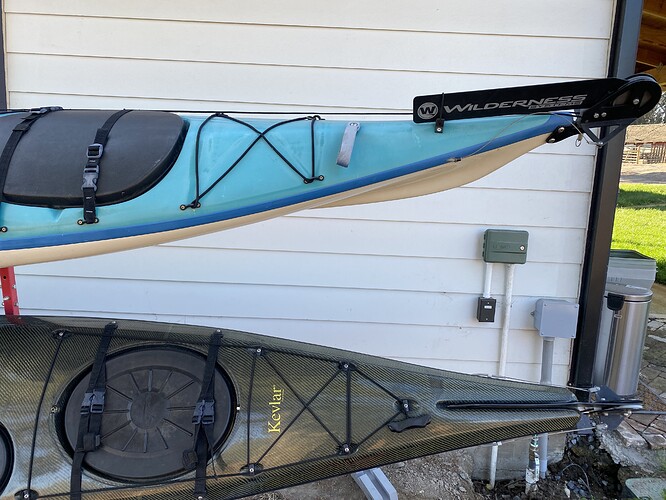 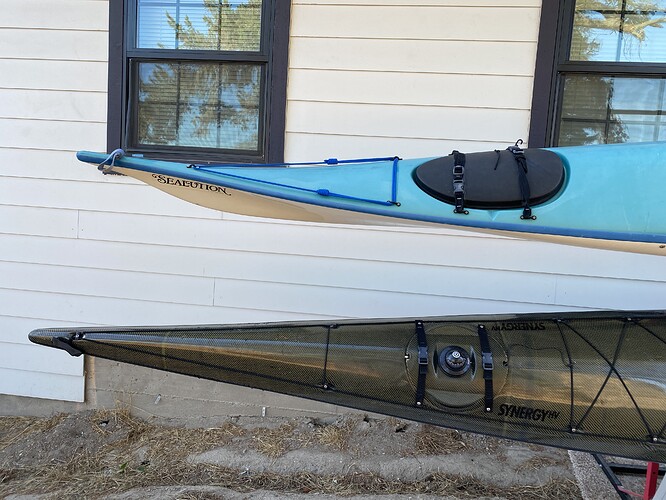 My Current Designs boats I have purchased are 99-2002 good shape few light scratches on deck to near none and few scratches on bottom.

Depends if it’s a sought after boat and popular kayak. Remember when selling you can’t go up. Put asking X dollars people will make offers.

That’s a lighter Kevlar layup and the deck at least has a nice gloss and looks like it’s in great shape. That might fetch more than the $800-$1000 asking price I suggested previously. I recently bought a 10 year old QCC 600X in carbon/kevlar for $1200, and it needed some work on the rudder controls. The Sealution looks good too but I think that is pretty old. You might want to ask a little less if you want it to move. But I’m no expert - just one guy with one opinion.

As far as starting with a higher asking price, I would advise not to go too high. My own reaction to an unrealistically high asking price is that the seller is likely to be unreasonable and I usually just ignore those listings.

Where are you located?

Thanks everyone else for the feedback so far!

In this market, I wouldn’t hesitate to list them on the high side and see what you get for responses. Worst case, you drop the asking price, but I bet they move fast.

I would weigh them and include that. Make sure to highlight the kevlar

Part of the value will also be affected by popularity - I had a Betsie Bay Recluse that I bought used from a friend for $2K. They were $4K new, and popular at the time… I refinished the deck, installed new hatches, footpegs, changed the seat to gel pad and backband, and re-painted the hull from the chines down. Took me 3 years to sell it, and only got $500. Only offer I got. I don’t think you’d run into that situation nearly as bad with the boats you’re looking to sell, but it is a consideration when setting the initial asking price, or when negotiating the final sale price.

That color scheme on the Sealution screams early 90’s. My Shenai has the same color and taping pattern and is from 1993.

In this market, I wouldn’t hesitate to list them on the high side and see what you get for responses.

In the NW, kayaks aren’t selling well at this time of year. Sales were brisk from late spring to early fall. Maybe things will improve again after the cold months.

Long boats are a tough sell these days, even brand new (16 foot and longer was the only segment in the kayak market this year that was still relatively flat compared to the explosion in numbers in every other segment). The Wildy’s verging on an antique, and their glass work was always kinda so-so compared to CD and some others; given the age of the boat and the crudeness of the cockpit outfitting relative to current boats, ask for $699 and be happy if you can get anything near that.

The other’s more of a specialty item - if you’re patient for the right buyer, you might be able to get $1100 or so.

By glasswork do you mean fiberglass? Whats CD? I really dont know a lot about boats.
How would you briefly describe the boats for a craigslist ad? Im not sure I know the good points to make about these boats other than they are kayaks.

Also, is there a better place to be selling these than craigslist?

Don’t just describe them as kayaks as these boats are really not “recreational” designs used mostly for flat water. They are “touring sea kayaks”, which sell for 2x-3x the price of recreational boats. Composite (fiberglass, kevlar, etc.) construction means that theSynergy was essentially hand made and is also considered a big step up from rotomolded plastic and priced accordingly. I suspect, but I’m not sure, that the Wilderness Systems boat is thermoformed ABS, somewhat in between in terms of value than composite or rotomolded,

You could try listing them here on paddling.com. The synergy boat in particular should be quite desirable. You never know!

Look them up on google and see what the market says.