Did the Green River - now what?

We did an 11 day canoe trip on the Green River this spring (Ruby Ranch to the confluence.) We took our 4 and 7 year old boys, and loved it.

We’re looking for the next trip with similar flatwater (or mellow whitewater,) wilderness camping, etc.

We did the green in a “catamaran” canoe setup, which worked great. Is this a thing on other rivers?

It seems that for our family, we’d be crowded in one canoe, and not really ready to have the kids do a lot of useful paddling if we have two. So, a catamaran (or raft?) seems to be a good option for now.

Anyway, would love your suggestions on wilderness rivers that would be appropriate for our family. We’re in Washington State, but willing to drive or fly most places in the US or Canada. Thanks!

Bowron Lakes is a beautiful week long loop but with only one short stretch of moving water and eight or so cartable portages its really a canoe trip rather than raft
it is possible to rent 20 foot canoes which is more than your family needs
Try the Teslin and Yukon Rivers. They are fast moving flatwater until Carmacks
Below is a class 3 rapid because of standing waves at Five Fingers
However a cataraft woukd be feasible
ive seen rafts that were made of branches on the shore

Missouri Breaks in Montana
150 miles through cantons and grassland and grazing areas
Moving. No whitewater

Thank you! Bowron Lakes is on the list, and the other ones look promising. We’re also looking at BWCA.

I’ll second the upper Missouri river in Montana. When your kids study American history in school they can say that they camped in places where Lewis and Clark camped. Several of the BLM campsites are at locations where Lewis and Clark’s party stayed. The one time I paddled there was at the end of July. With very little shade along the river the hot weather we had was getting to me but other than that it was a nice trip.

We have done both the Teslin River from Johnson Crossing and the Yukon River from Carmacks to Dawson City. Five Fingers Rapids and Rink Rapids are not a big deal. You just have to use the correct channel (river right). Not class 3, maybe class 2 in high water. Both rivers are fast flowing, faster than the Green River. Even pretty fast after Five Fingers. You have to make sure you are on the side of the river you want to stop at or in the right channel as it would be extremely difficult to paddle back upstream. We felt the Teslin River was much more interesting than the Yukon River.

Besides Bowron Lakes, you might want to consider Murtle Lake in BC. It is the largest canoe/kayak lake in North America and only has a short portage to get into it. There are even canoe carts to use for the portage. Can be busy in the summer months, but not as busy as the Bowron Lakes.

Bowron Lakes tend to be very busy in the summer months. Best time for no crowds is early in the year or later September or October. We’ve been there in late July/early August. You have to plan to paddle early to get off the water early to get a campsite. Too busy. Late September was great as we really didn’t see many people and the campsites are not crowded.

Another one is Nation Lakes in northern BC. It is a linear chain linked by short easy sections of the Nation River. A few log jams to deal with but otherwise very simple. Biggest challenge is the vehicle shuttle from one end to the other. Not busy, we spent 9 days there in August and didn’t see anyone for the first 6 days. And we say way more wildlife than on the Bowrons.

Sue or after a wildfire outbreak… We only shared a site one night… Late August. The other suggestions you gave are ones I have not done… Is it possible to move BC closer to Maine?
We do have the Allagash at home . Its about 100 miles if you start from Chamberlain Bridge… The official length is 92 miles but you can’t launch at Telos Lake… The kids would love the trains and old abandoned machinery.

The Salmon in Idaho isn’t a class 1 trip - except for a few limited day-trip stretches. Any multi-day trip I can think of on that river will encounter class 3 or higher.

One can do a long multi-day class 1-2 trip on the Snake river in Idaho, but it won’t be wilderness and it will involve portages around dams. Not that interesting, really - unless you just happen to be in the area (mostly rural/agricultural),

The upper Snake in eastern Idaho has a few stretches that make a nice scenic two or three day trip, and the fishing is good. If you are interested in that area, I suggest you get a copy of Kath and Ron’s Guide to Idaho Paddling (aka “The Purple Book”).

Another book you should have if you don’t already, is Paddle Routes of the Inland Northwest, by Rich Landers and Dan Hansen. Of interest in that publication, among others, (I haven’t done it yet) is the Flathead River in Montana. 3 days - 54 miles.

Do one of the most scenic flat water sections in the US. The Missouri Breaks National Monument in Montana.
Sp 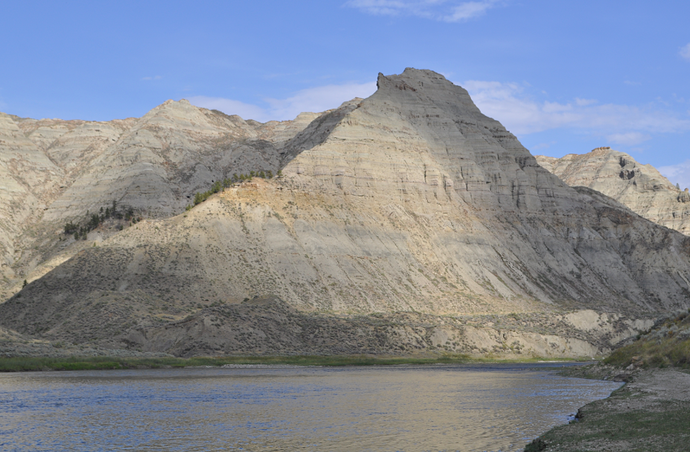 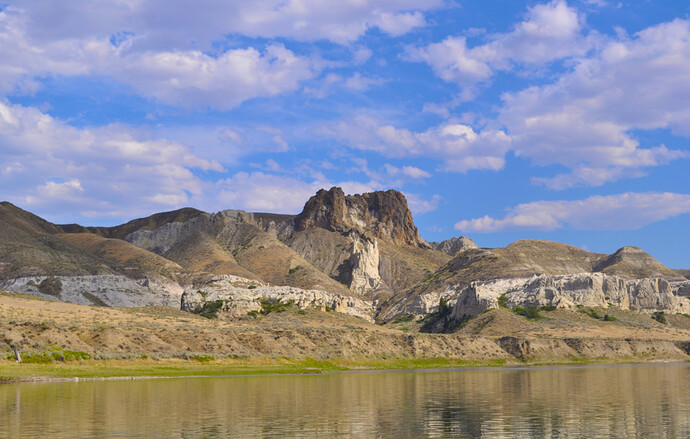 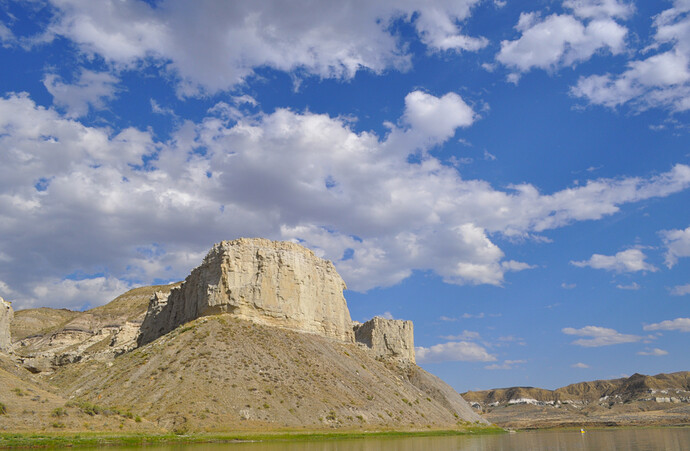 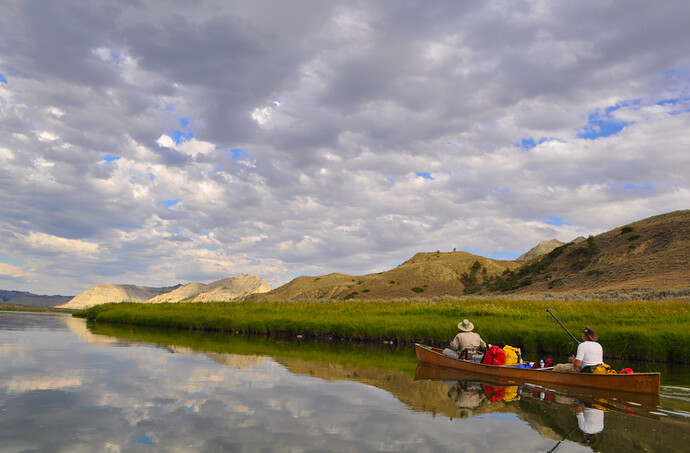 Thats a good trip if you are in the area
Setting up the shuttle is lengthy
That said we did it in geese breeding season and the constant honking drove us bats
River was moving and we did Coal Bank to Kipp in four days.

I made the trip in 1998 from Ft Benton to Kipp Bridge which is 151 miles. We saw no one the last 4 days. We had planned 7 days, but the weather was record hot so we paddled 36 miles the last day to find some ice and cold beer. Six days on the water.

I lashed some poles on two tandem canoes once on the Snake River in Idaho on a flat section. The hulls of the boats tend to plunge through waves rather than ride over them. I would not recommend it on faster moving rivers or in wind driven waves.

Now you find your next big western river to float.