I’ve had my new-to-me 2004 Mohawk Odyssey Solo 14 out four times after purchasing it earlier this year. I’ve paddled kayaks and canoes in Class 3+ rivers over a period of many years and prefer a high webbed seat for both sitting and kneeling because I can no longer use a pedestal. I’d give the Odyssey high marks for Durability, Dryness and Stability. But I find its maneuverability disappointing because of resistance to turning. I recall the Mohawk Solo 13, though a wetter boat, as more responsive than this Odyssey despite its 1" rocker compared with the Odysseys 1.75." Of course there’s no standard definition of rocker and some say how a boat rests in the water ('high" or “low”) is just as important as rocker. Shorter boats may be inherently easier to turn–all other things equal. These are all things I do not know.

To remedy my dissatisfaction with my Odyssey Solo 14, I’ve experimented with replacing the standard front thwart with one 1.75" longer in order to increase flare and thus rocker. (Visualize what happens to the bottom edge of a business envelope when you widen the gap of the top…) So far I don’t discern much improvement–though some say it may take 2" to 3" greater thwart length to increase flare enough to cause the front section of the canoe to rise–increasing rocker. Has anyone heard any success stories in this regard? I’d like to keep this old Odyssey if I can get it to turn more quickly.

To remedy my dissatisfaction with my Odyssey Solo 14, I’ve experimented with replacing the standard front thwart with one 1.75" longer in order to increase flare and thus rocker. (Visualize what happens to the bottom edge of a business envelope when you widen the gap of the top…) So far I don’t discern much improvement–though some say it may take 2" to 3" greater thwart length to increase flare enough to cause the front section of the canoe to rise–increasing rocker. Has anyone heard any success stories in this regard? I’d like to keep this old Odyssey if I can get it to turn more quickly.

I haven’t but a friend back in the mid-90s did something similar to a Discovery (169 I think) and ran the Lower Yough in it tandem with some success. That was shortly before he bought an Encore.

How is your lean? Being a crossover boat, FW/WW, it will likely require a greater lean for response then a straight up WW.

I think you may mean my J lean. Good point. Gotta remember the “Keep your Nose over your Navel” mantra. Not sure what you mean by FW/WW

I paddle class III in an Outrage. I paddle flatwater in a Wildfire. The Outrage tuns faster than the Wildfire but I wouldn’t want to paddle it on extended flatwater - different boat for different conditions. Play around with it as you see fit, but it will never turn like a WW boat.

I have not owned an Odyssey 14 and have only briefly paddled one, but I have had friends who owned them and generally seemed to like them for use as river tripping canoes. But it is clearly a compromise design intended to have sufficient maneuverability for river use and still remain tolerable for flat water use. It isn’t going to spin like a whitewater design. It would not be my choice for paddling Class III whitewater or even very technical Class II whitewater.

Thanks pblanc. I’m 78 (69" 165#) with ww experience stretching back to the 70s who has a will to continue paddling twisty, rocky Ozark rivers but who increasingly prefers lighter weight canoes. I’m on a budget with room for only two boats. Besides the Mohawk Odyssey 14’, I have a Mohawk Nova 16’–but can trade.
Q: what other canoe might you recommend instead? --Dave

I paddle Ozark rivers frequently and usually prefer old-school whitewater canoes. I can make them go fast enough for the groups I paddle with and with decent current flow can get them up to 5mph or a little faster without too much difficulty. If you are looking for more maneuverability and since you already know how to make a highly rockered whitewater boat go where you want it to go, that might be the answer.

I have used a variety of older whitewater solo canoes for that purpose including a Dagger Caper, Whitesell Piranha, Blue Hole Sunburst II, Mohawk XL 13, and my current favorite Mad River ME. But none of them are going to be what I would call light in weight.

I could suggest a number of light weight composite boats that fit the bill but none of them would be too budget-friendly in today’s market, unless you were exceptionally lucky finding one used and owned by someone who did not appreciate its potential value.

Nice stable you have there! I began with a Bluehole OCA, then a Sunburst One–a wet boat–before learning to roll a kayak so I could paddle the Grand Canyon in 1991. I returned to canoeing 10 years later with a pedestal style canoe. I prefer kneeling now in a web seat b/c I require greater blood circulation. That–and age-- limits me to class 2+. Congrats on hanging in there!

The Sunburst II is a drier boat than the Sunburst and certainly dry enough for any Ozark stream, but certainly not light.

I bought my fist solo canoe in 2005 - it is a 2004 Bell Yellowstone Solo. I bought it new, and had to decided between the Yellowstone Solo at $800, or the Mohawk Odyssey for $100 more. I went with the Yellowstone Solo and have never regretted it, but always wondered about the Odyssey. You don’t see many of them around here (New England). I also have a Mohawk Whitewater 16 tandem.

A few years ago I bought a composite WildFire, so I have the Royalex and composite versions. The Wildfire is a little lighter, but not significantly so, and I honestly don’t find that it paddles that much different from the Yellowstone. For rocky streams the Yellowstone is the boat. It doesn’t spin like a WW boat, but I can get it in and out of eddies, ferry, whatever. Personally, I am willing to sacrifice some maneuverability for easier paddling on the flats.

At your weight you could go with a shorter boat and it would probably turn better (FlashFire, Solo 13, etc.) but as pblanc said, they can be tough to find.

Thanks for sharing your experience. A friend says he finds his Wildfire a wet boat. I have paddled a friend’s Solo 13 several times and liked it. My only complaint was its shallow depth. I didn’t overturn but took in lotsa water in a large eddy as I turned to avoid a downed tree on river right. Made me wish for the Odyssey. It’s dry, stable and durable. My immediate mission is to practice my offside J lean and see hiw much that improves turning in fast water.

The composite Bell/Placid/Colden Wildfire and the Royalex Bell Wildfire/Yellowstone Solo are very nimble and nice handling river canoes. The Royalex version is just about my favorite river canoe that is not an all-out whitewater boat.

But with a center depth of 12 1/2" neither can be considered a whitewater boat, despite claims from many that they have paddled these boats in Class II-III whitewater. I do prefer the symmetrical rocker of the composite boat to the asymmetrical rocker of the Royalex version, but of the canoes that I have paddled that have less stern rocker the Wildfire/Yellowstone Solo seems to have a stern that is significantly less sticky than most others.

Thank you for sharing your experience. Ah, balancing weight and maneuverability against aging and $$$–that would seem to be my question.

Thanks for sharing your experience. A friend says he finds his Wildfire a wet boat. I have paddled a friend’s Solo 13 several times and liked it. My only complaint was its shallow depth.

Yup - the Yellowstone/Wildfire can be a bit of a submarine. With me in it at 240 lbs. there is not a lot of freeboard… 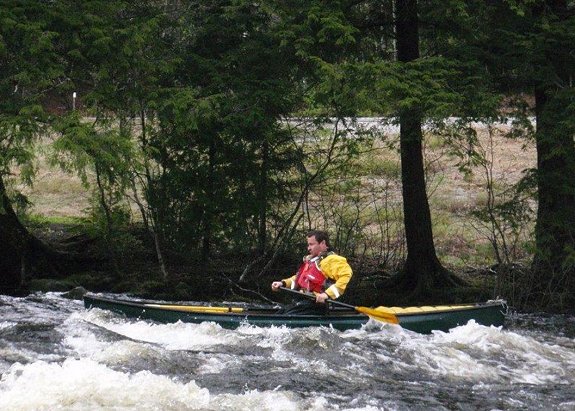 This is the Upper Ammo in NH, which is a great river for this boat - starts off as flatwater, builds to quickwater, and ends with a nice class II rapid as you come into the village of Stark. On this trip we lucked out and caught it at nice level.

If it is a whitewater playday, I’d take my whitewater boat. But for a down-river run that includes some easy rapids, this is the boat for me.

Nice-looking boat there! I’m 69" and 175 lbs, but I’m also 78 with loss of strength and agility. Otherwise I too would paddle a WW boat from a pedestal. As it us, I’d love to find either a Yellowstone or Wildfire solo in Royalex. Let me know if you hear of any that are available! Thanks for corresponding!–Dave Redmon 785-four ten-9001