I just read Debra Shields instructions for the “DIY Cockpit Cover”. It’s a great instructional tool and looks fairly simple. I’ve thought of doing this in the past but never got beyond the measuring of the perimeter.
Thanks Debra for posting this. It’s an awesome, simple design with well written instructions.
It also helps that I have different fabrics, in my stash, meant for other projects to make at least 3 or 4 of these plus I have several vintage sewing machines which IMO, are more hardy than newer ones and handle this type of material. I would truly like to use the Singer 431G but it’s still on my work bench for about another week. Thanks again.

A link to it would be nice.

Interesting design, but way too time-consuming.

I make pit covers all the time and prefer to cut the top piece by the tracing method then just add 1" extra all the way around. I have used mosquito netting for some “decks” (keeps out critters, lets boat dry out) , neoprene for others (for sealing cockpit tautly during extended highway travel to reduce wind turbulence). But mostly I use remnants of colorful fabric made for outdoor upholstery. Some is UV resistant and that which is not I spray with Scotch 303 to reduce fading when stored outdoors or transported for long days.

For the part that fits under the coaming lip I cut a 4" wide strip of black nylon or polyester oxford or pack cloth (nothing too stiff) that is as long as the cockpit circumference plus another 4". Fold over both the short ends of the strip 1" twice and machine stitch close to the fold to hem the ends. Now fold the whole strip in half lengthwise and pin the doubled long edge to the right side (top) of the deck piece, matching all 3 raw edges. Start at the middle stern end of the cover (the bungee cord will be be sticking out of the two hemmed ends behind the seat.) Cut an 8" length of 1" nylon webbing and sear the cut ends with a match or lighter to prevent fraying. Fold it in half and pin it to the tip of the cockpit cover deck at the bow end (grab loop) It should be pinned with the melt sealed ends flush with the raw edge of the cover deck, laying on the right side up of the piece and with the loop end of the webbing laying on the deck pointing towards the center. You will pin and sew the long flange over the loop.

The more pins the better to attach the folded flange to the deck – every 2" at least, maybe one pin every 1" at the tighter curves in the back of the coaming and the tight one at the bow end. Once it’s pinned, run a machine stitched seam about 5/8" to 1" all the way around, tacking or backstitching at the open hemmed ends, which should meet each other in the back. Run a second set of stitching halfway between that seam and the matched raw edges all the way around to reduce fraying. Now all you have to do is use a bodkin or a large safety pin (does anyone use diaper pins any more, can you even buy them?) to fasten to your bungee cord and push through the tunnel leaving a few inches of extra cord sticking out both ends… Pull the bungee and gather and pucker the fabric so the thing looks like a giant flat shower cap. Tie both ends of the bungee cord together in an overhand knot, Now check the fit by placing on your cockpit coaming and snug up the bungee or loosen as needed and re-tie. Ta-Da!

This all takes me less than 90 minutes most times – have even done it in less than an hour when I already had a paper pattern from one I had done before.

I use a 1917 Singer treadle, non-electrified. That thing could sew through a pine 2 x 4. I use a jeans gauge needle and heavy UV resistant thread for outdoor furniture cushions. Probably overkill on the thread. YOu can use regular bungee cord but I bought 20 yards of marine spec UV and heat resistant bungee some years ago and still have not used it up . I believe it is 1/4" in diameter. Here is my fave cover I made out of an outdoor upholstery remnant from Joann Fabrics. Matches all my kayaks (2 green, 4 red and 1 yellow). My first pit cover was black nylon – hated it. Always getting mixed up in the gear bag with the sprayskirts and hydroskin – too much black! I never lose track of these bright floral ones. 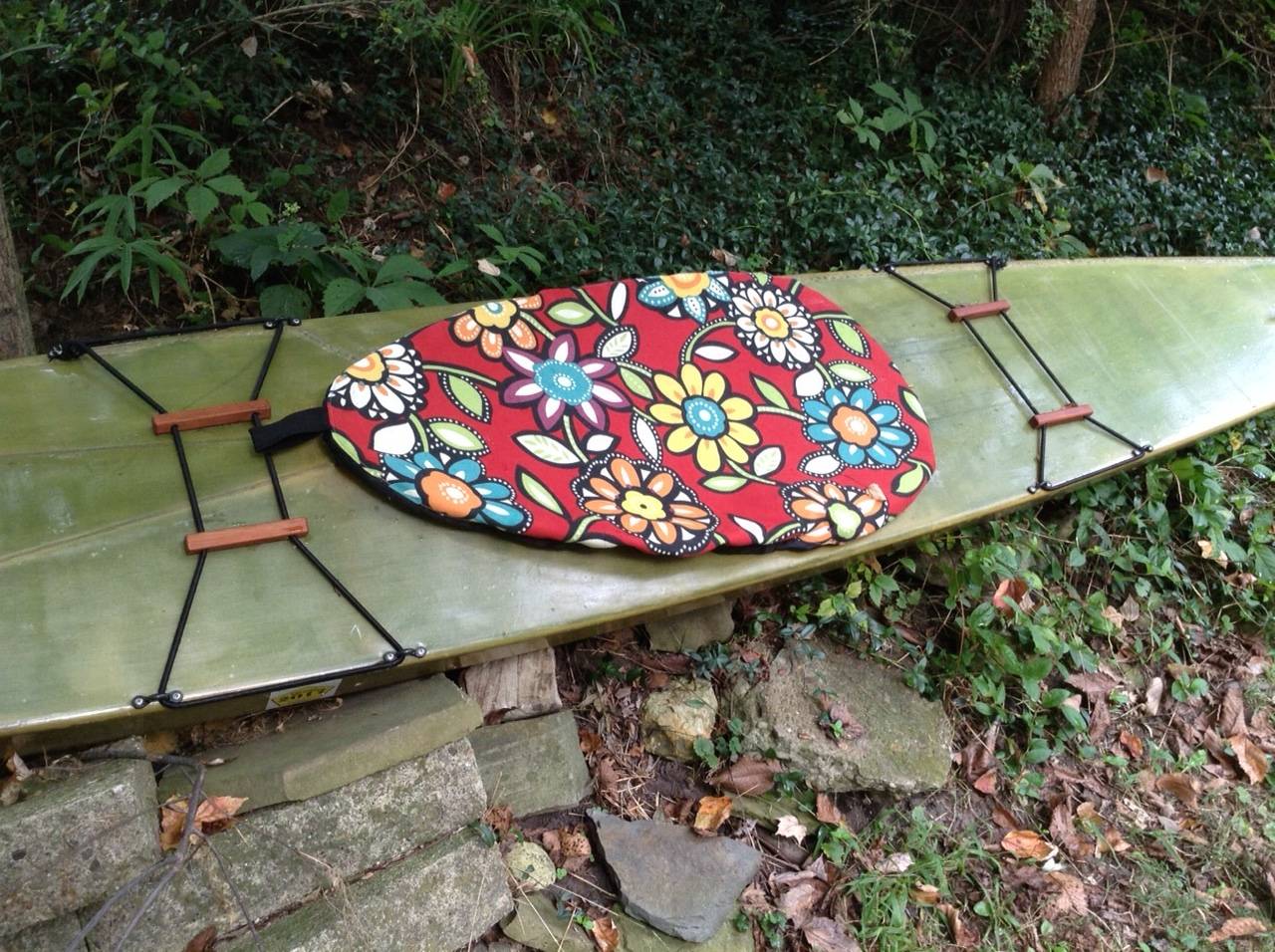 Only drawback is I’ve noticed bees buzzing in to check out the flowers – I swear one gave me a dirty look after she realized that they weren’t real. I have a similar situation with both of my green kayaks – I always seem to end up with hitch-hiking dragonflies that I never have favoring my yellow or red boats. Often they are mating – on one lazy river group trip my fellow paddlers dubbed my craft “the Love Boat” for the frequency of “honeymooning” Anisopterae on my decks.