Do Royalex canoes float when swamped?

I’m looking to get a canoe for recreation, fishing, and tripping that can also be used for white water. Practically, that seems to come down to getting a WW canoe that can double for lake use, and the material of choice for WW canoes seems to be Royalex. When outfitted for WW, these canoes have float bags. Can the huge WW float bags be safely taken out for calm water without additional floatation being added back in? These canoes do typically have a foam saddle.

Royalex boat will float without airbags irregardless of a foam saddle. You’ll only need airbags for whitewater.

The H2Pro is an old school whitewater boat - like a Dagger Impluse or Mohawk XL13. It will probably come outfitted with a saddle - necessary for whitewater paddling, but not necessary or comfortable for the recreation, fishing, and tripping that you also plan to do. I don’t know what is has for rocker, but these boats designed to spin in moving water, and can be difficult to paddle straight in flatwater. It will also be difficult to paddle in the wind. The good news is the boat won’t sink to the bottom if swamped without bags - it will float even filled with water.

I’ll be interested to hear how you like the boat. If your primary interest is recreation, fishing, and tripping, this probably isn’t the best choice.

Oops, I missed the Old Town H20 part. eckison is absolutely correct about that not being the boat for you. There are only a few solo Royalex boats that would suit your needs, and those will be difficult to find, and expensive if you do. I’d look for a 15 or 16 foot tandem, and learn to paddle it solo.

That’s good that it floats.

While I want a boat for flat and whitewater, I don’t want to get two (more) boats, so I figured to see how I get along for now with a relatively mild WW one.

I actually got a Grumman 17 a few months ago anyway, but it’s a beast for one person just to pick up. I wasn’t even motivated enough to put it in the water, although I’ll keep it for now for when I find someone to paddle with. What makes sense, now that I think about it, would be to look to trade that for a smaller, lighter, flatwater tandem that would also be good solo.

The OT H20 has 4" of rocker I think. The Mohawk XL13 has 3". The OT is almost 14’ long. From what I read about them, including the reviews here, they are amongst the best tracking WW boats due to their moderate rocker and long length. What that’s worth remains to be seen.

Is it possible trying to keep such a boat going straight would make for excellent flatwater stroke training?

I was skeptical about how much I would like a saddle for fishing or even mild river trips like most of the Delaware. Is it practical to extend legs forward while in a saddle, and is that comfortable for cruising/fishing even if you can?

I might want to be looking into an alternate seat that I can easily swap in and out. Any ideas on that?

My WW paddling will be primarily on the Delaware and Lehigh Rivers. I’m thinking I probably wouldn’t need the float bags for the Delaware.

Royalex is a foam cored material… So there is flotation. In whitewater air bags are used to displace water to limit the amount of water that gets in the boat. Ergo it floats higher which is useful if the boat gets pinned.
Four inches is a lot of rocker. The boat is designed to spin and you will be spending a lot of time making it go straight at very slow flatwater speeds. Usually as you gain speed the bow gets pinned a little by the bow wave helping you. That won’t happen with that boat.
Yes forward stroke training is helped by a boat with a little rocker but four inches may drive you nuts

If you could find one, I think you would be much better off with something like a Mohawk Odyssey or Solo 14, Wenonah Argosy or a Bell Wildfire/Yellowstone Solo. They can do mild whitewater, and will be much more fun to paddle on the flats. The H2Pro is a a big boat, and between the rocker and the pedestal, its going to be a pig to paddle on the flats. I guess you could take out the pedestal and install a normal bench seat, which would make the boat more comfortable for non-whitewater use.

Have owned, and paddled every canoe that Eckilson mentioned in his 2 posts.
Still own & paddle a Wildfire, and an Odyssey.
Also own an H2Pro, and I totally agree with what he said about that one.
It’s NOT a canoe you’re going to enjoy using for fishing, or on flatwater.
It was made for neither application; which is not to say it’s a bad boat, or you shouldn’t buy whatever you want. 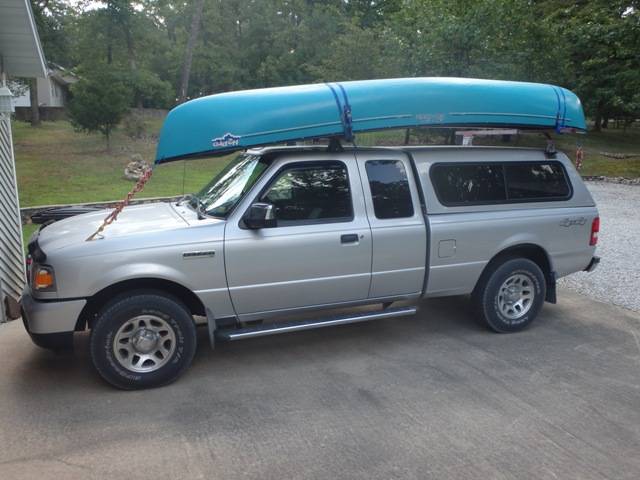 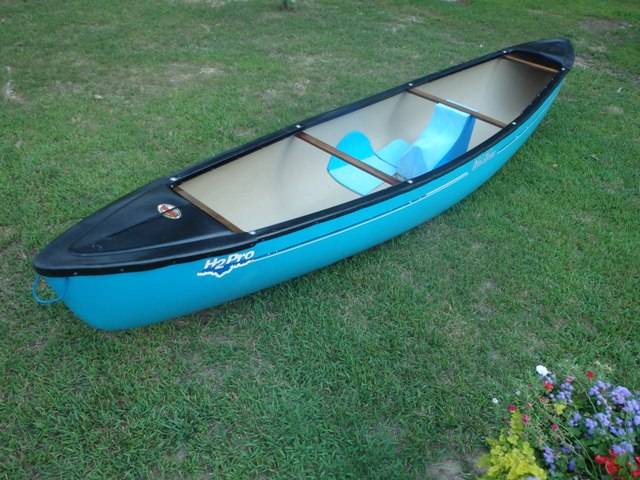 Another option would be a Mad River Guide/Freedom Solo.

That would be another good choice. Not too much rocker but enough… And its got a slightly skegged stern to help tracking on the flats.

If you could find one, which would be difficult; a Mad River Courier would work quite well. 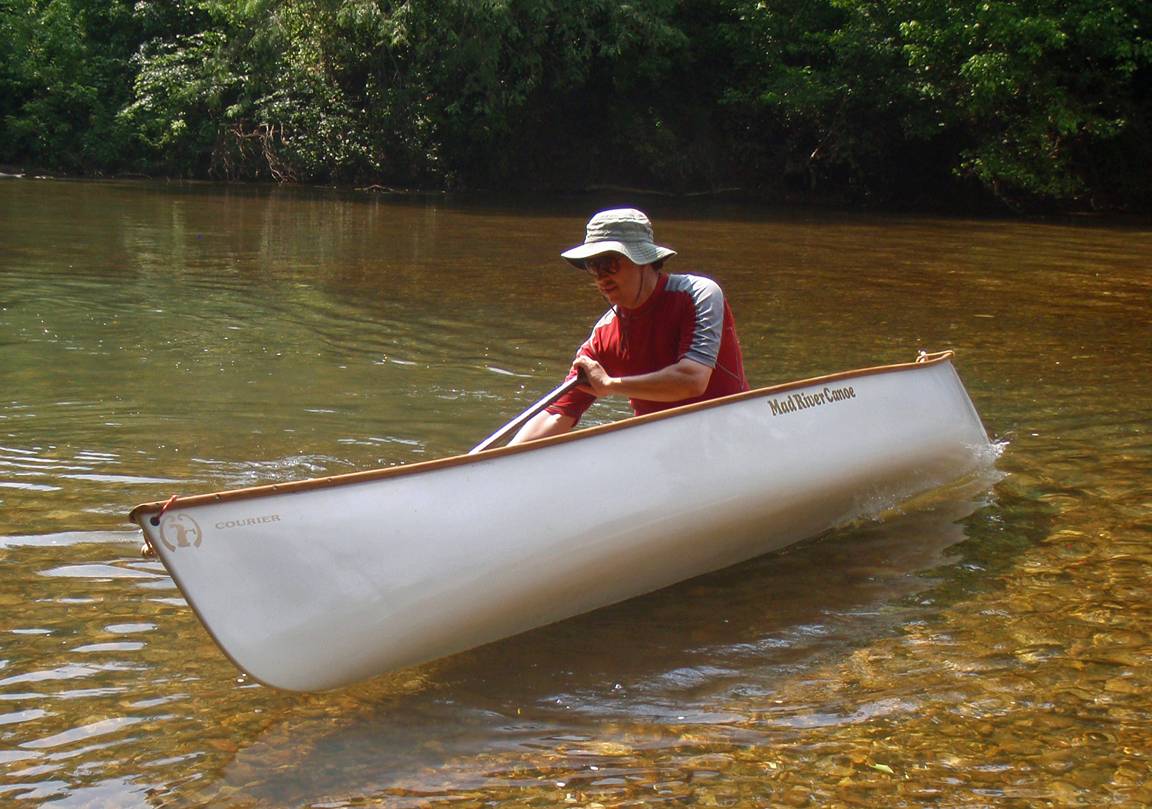 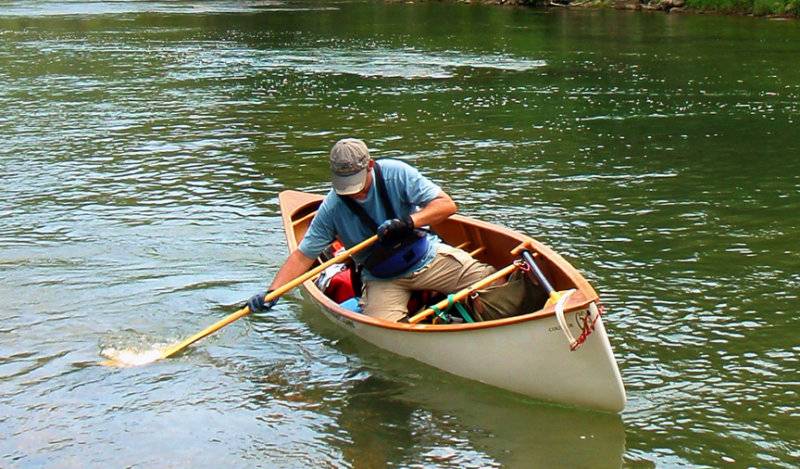 I’ll chime in too. I agree with all the other posts so far. What I will add is that my “most whitewater-capable boat” is a Novacraft Supernova. I honestly can’t remember how much rocker it has, but I think it’s 2.5 inches. The boat is symmetrical in all aspects. That’s not much rocker compared to the whitewater boats you are looking at, but it’s pushing the limits for a flatwater-friendly boat. I love that boat and frequently do use it on flatwater, but as it pertains to your question, this is a boat which WILL make you a better paddler if you are of the mindset not to develop bad habits, because it could also be a boat to teach bad habits. Be careful about that with any boat that has squirrely handling.

Just to illustrate the boat’s behavior, if I’m cruising along on flatwater and want to take a picture of something (I do that a lot), this boat will spin completely around in the time it takes me to set the paddle down and get my camera out of the box.

Whitewater boats tend to be higher too, which is really noticeable when the wind blows.

I didn’t notice any indication regarding the level of whitewater you intend to do, nor in your experience level, so I’ll just point out that most Class II whitewater and very short Class III drops don’t really require much specialization, though float bags are definitely an asset. That’s where the recommendation for a boat like the Mohawk Odyssey 14 or the Mad River Guide/Freedom Solo comes in. The Odyssey 14 is a boat I love in Class I and II whitewater where moderate maneuvering is required, and it’s a superb boat for side-slipping maneuvers, yet it’s pretty good for flatwater (I have no experience with the Guide/Freedom Solo, but that boat is similarly “tame” in terms of its dedication to being maneuverable). The Novacraft Supernova that I mentioned has much more squirrely handling than either of those two models, even though it’s a long way from being a true whitewater boat.