Does anyone have any exprience mounting Hullavators on Thule AeroBlade rooftoop carriers?

I have a pair of model 898 Hullavator Pros that originally were installed on Yakama round bars on my old 97 p/u that still had “rain gutters”. When I sold that truck, I bought Thule AeroBlade roof mounts for the 2016 p/u. I contacted Thule for help on mounting the Hullivator(s) on that new rack system. They sent me new bolts and some square slide-in ‘nuts’ to secure the unit. Well, I finally got around to trying to install the Hullavators (now that kayaking season is here) and found that the parts they sent me did NOT secure the Hullavator to the AeroBlades. Not even close. Bolts were too long. So off to Home Depot to get shorter bolts. Three trips to the ‘Ho’, in fact, and nothing would work. I called Thule and talked to a rep who suggested I send pics to show what my problem was. A couple of hours later I got a response. He and his co-workers pretty much said I was doing everything right and it should mount just fine. Well - NOT!

Later we find (on the Thule website) a thing called an “AeroBlade Adapter” which looks to be the answer to our problem. I guess it actually came with the original parts bag that accompanies Hullavators (according to the Thule rep I was emailing back and forth with), but since we had ours ‘professionally’ installed on our old p/u, we didn’t get this parts bag. Now I’m waiting for Thule to get back to me about what parts I DO need to get our Hullavators installed.

Has anyone else mounted a Hullavator on a set of Thule AeroBlade roof racks? If so, how did YOU do it?

I’m not familiar with just what the “aero bar” is. But everything Thule is metric thread. 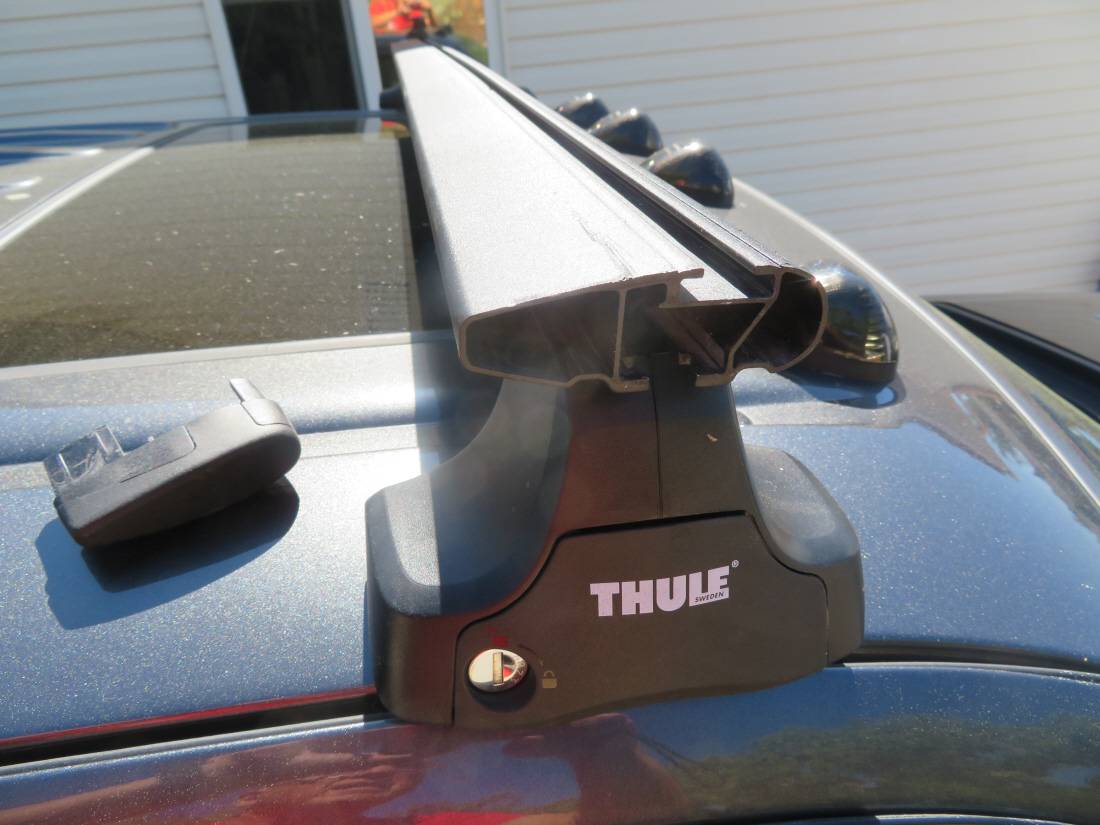 This is the “AeroBlade” with the end cap and wind diffuser rubber slide in, removed.

When you put the prep rack on the aero bar does it wobble fore and aft?

Funny you should ask. Check out this vid I made just to show the guys at Thule.

Did you drive those screws straight through the bottom aerobar as instructed?

My Hullavator is mounted on Thule’s Aerobars. Can’t give you details as I purchased the Hullavator from Marshall at The River Connection and the rack/bars from a northern Michigan outfitter who did the installation. 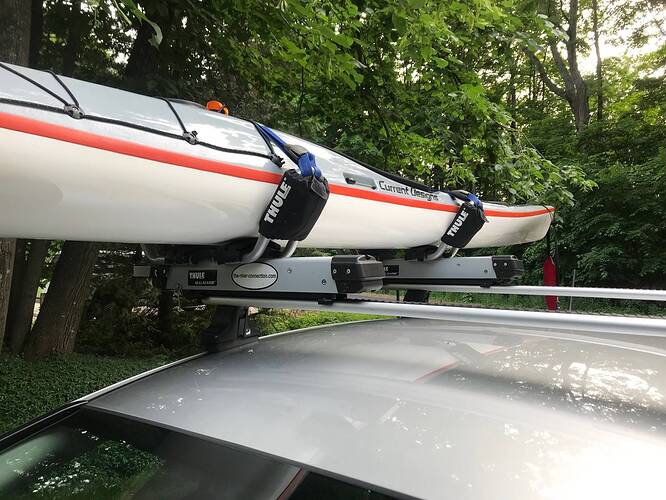 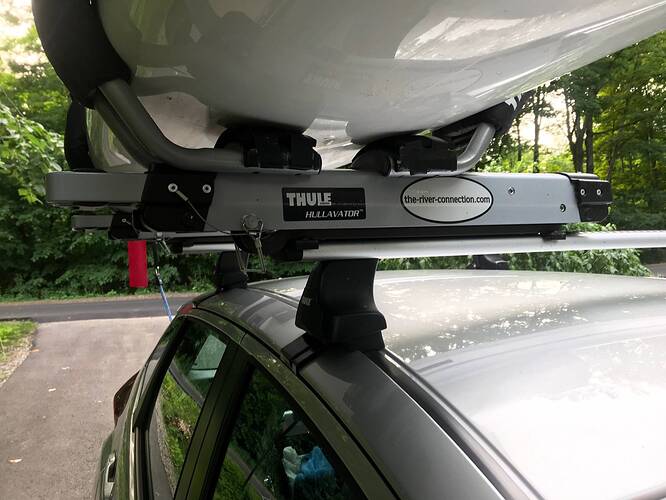 Wow! Your AeroBlades are a different color, but your attachment looks like what WE are (were) trying to do, but can’t. You obviously don’t need the “AerolBlade adapter” that we seem to need. Thanks for the pics. Maybe I’ll pass them along to the Thule guy when I talk to him tomorrow. Sure would like to get this predicament solved so we can get our kayaks to the lake!

We have a utility trailer that we haul our Polaris RZR in (14’), but what a PITA to park, unload the kayaks, and find a place to park all this ‘rigerage’ while we’re out paddling. Especially since we paid big bucks for the Hullavators! grrr.

Thanks again for your pics!

I have the exact same setup on aeroblades. The T nut and screw/bolt assembly that came with the Hullavator drives through the metal of the Aeroblade. I remember encountering resistance right about where your bolts currently sit, then hand cranking and poking through the metal. Voila, bolt sinks into its well. It’s never quite flush with the bar but it is secure and free of the rocking you demonstrate in that vid.

@MrTommy said:
Wow! Your AeroBlades are a different color, but your attachment looks like what WE are (were) trying to do, but can’t. You obviously don’t need the “AerolBlade adapter” that we seem to need. Thanks for the pics. Maybe I’ll pass them along to the Thule guy when I talk to him tomorrow. Sure would like to get this predicament solved so we can get our kayaks to the lake!

We have a utility trailer that we haul our Polaris RZR in (14’), but what a PITA to park, unload the kayaks, and find a place to park all this ‘rigerage’ while we’re out paddling. Especially since we paid big bucks for the Hullavators! grrr.

Thanks again for your pics!

I have the square bars. I tried searching Youtube BUT there is no video on mounting the 753352403 Bar Mount Assembly down onto the aero bars. I wish someone would post a video as I might in the future want aero bars.

I gave up modifying my bars and purchased the Thule system to mount the Hulivators to and make it whole.

Mr. T. The AeroBlade uses 35mm M6 bolts (New Evo Blade uses 40mm) and a square nut. There is way too much play in the attachment you’re showing in the video. When switching the bar mount assembly to a T-Track installation there is a different set of metal shackles used which are flat and have a corresponding hole to line up with the bolt hole of the Bar Mount. This should allow the assmbly to be torqued enough to be snug. Did you use these shackles, drilled a bolt hole in the old ones with the rounded center or go without? Any of these scenarios could explain the excessive play.

When I get to Store today I’ll see if I have some in my Thule oddity bin to post pics.

Marshall, All I did was try to install the Hullavator according to the instructions, and what the Thule guy sent me in emails. That wobbling in the video is how it reacts once the bolts are solidly torqued down. In other words, it doesn’t work. I thought about drilling holes in the bottom of the AeroBlades to allow the bolts to be snugged down while going below the bottom of the ‘Blades’ but wifey put the halt to that. “Get them to send us the parts we need”, she says. Well, I agree. This is getting out of hand.

If this is in place the only thing I can think of is that you used the 40mm bolt instead of the 35 mm bolt so it is bottomed out on the track base and allowing slop at the head of the bolt. Normally it should snug down quite well.

No, I didn’t install “Part Z” (the AeroBlade Adapter Bracket) because I don’t have that part. That’s the problem. And it sort of irks me that the guy I spoke with at Thule never even MENTIONED that part when I called and told him of my problem. He just sent me pages from the owner’s manual (which I already had - and tried to install the unit per those instructions) and said I was doing it right. Should install with no problems.

If I remember correctly, when we went from Yakama round bars to the Thule AeroBlades, I called Thule and they sent me these parts free of charge. I guess this is an example of the “free stuff” being worth exactly what I paid for them . . .

Mr. T.
No Adaptor Bracket would explain the play using the 35mm M6 bolt. Call Thule or if you get really stuck, let me know and I know the Secret Squirrel phone # to get through to my Thule engineer, for you.

Thanks Marshall! Looks to me like the Adapter Bracket uses entirely different mounting bolts and ‘stuff’. In fact, the method of attachment is totally different. Instead of the square nuts sliding into the slot on top of the AeroBlades (after removing the rubber wind deflector), the rubber deflector thingie stays put while the bracket goes UNDER the AeroBlade and attaches via the already supplied hole on one side of the Hullavator, and the bracket fits into a slot already in the Hullavator’s opposite side.

As soon as our sprinkler installer gets here and gets to work, I’m going to call Thule and talk to my ‘helpful’ contact. Failing that, I might ask for the “Secret Squirrel” number. Ha. Thanks again. You’ve been more helpful that Thule!!!

Ok, called Thule again and talked to another ‘tech’. He’s sending out two adapter kits and I should have them by the end of the week. Holding my breath that this is what I need. His explanation sounded different than what I got from the first guy, so I’m hopeful . . .

He said everyone who gets these kits are happy with them (which tells me I’m not the only one who has had difficulties with this install).

Mr T I would love to see some video of you installing these adapters things. You would be the first on youtube.

My Hullavator base on square bars is clear not so clear on aero bars. 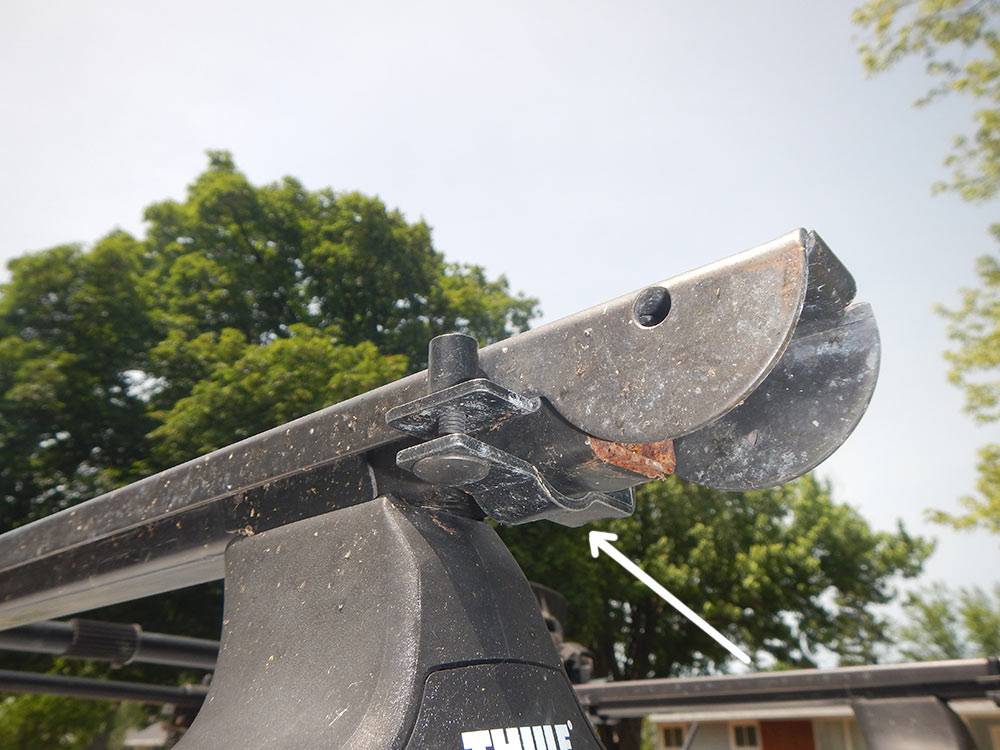 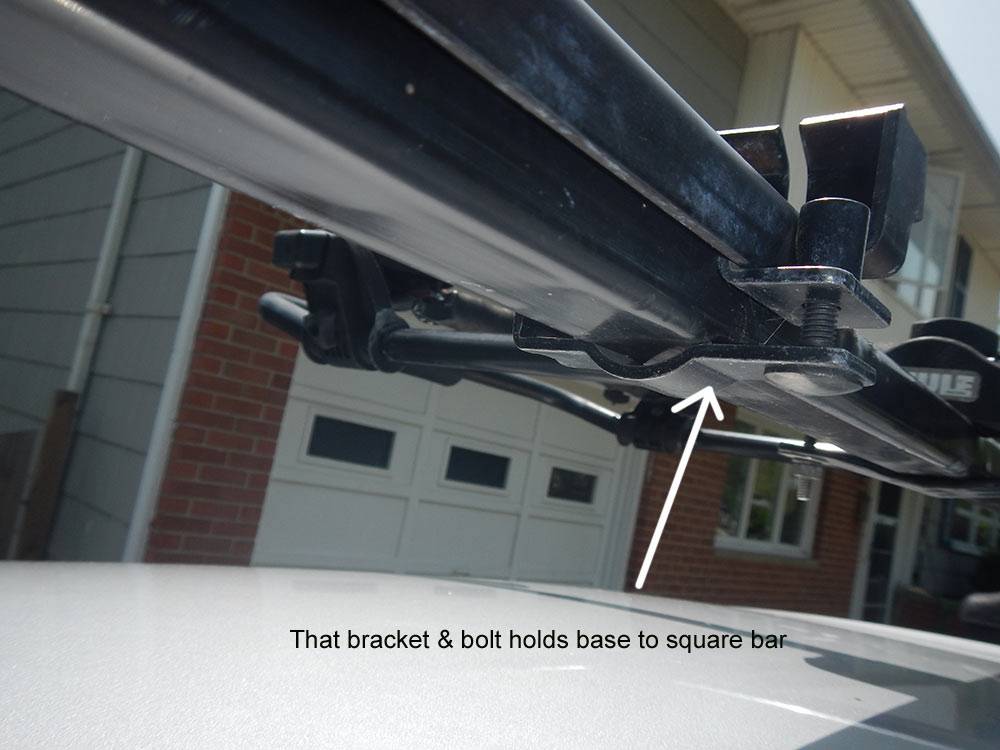