Does anyone recognize this old kayak? 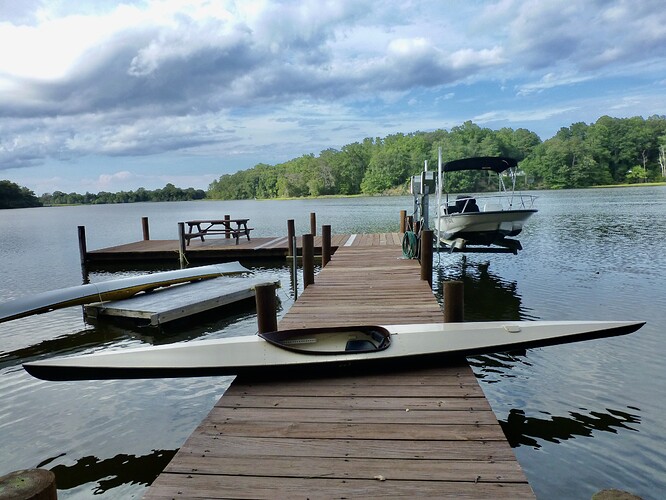 P10104204320×3240 2.9 MB
Is anyone familiar with this flatwater racer? A friend rescued two of these from the attic of the Washington DC Canoe Club attic about 30 years ago when they were cleaning house and gave me this one. It was in pieces, but the deck beams and coaming were lying intact inside the hull. It wasn’t too hard to piece back together and add a deck of light aircraft fabric. I later learned from an older flatwater racer friend who’d paddled one back in the day that these boats were built in Germany in the 1950’s as trainers for the Olympics. The hull is thin layers of mahogany, hot molded in an autoclave like the original Thistle class sailboats. There was some deterioration, but that was easily fixed with epoxy. The word MAX is branded inside the hull inside a small semi-circle. It’s a little over 17 feet long by 19.5 inches wide, and with repairs weighs about 30 lbs. Pretty fast boat.
2 Likes
ptickner March 27, 2021, 12:28am #2

I don’t recognize it, but it is very cool! Thanks for sharing.

It is probably a Stuer. They started in England and gained fame in the 1948 London Olympics. Kirton took them over in the 60’s. They are now based in Denmark.

Thanks for that info. I’ll see if I can follow up on it.

Almost certainly a vintage Struer. The Wanda Canoe Club and the story of some kayaks – Dave The Kayaker