Does keeping a wet towel over your cooler really help?

I’ve read references to a “swamp cooler” here, but when I Google it, come up a/c units. Need to keep food cold for 12 hours tomorrow in a solid plastic cooler that will be stashed inside my car. While it will contain frozen ice packs, I’d like to keep my chocolate milk and water cold, and food perishables edible.

Yes. Not of you are in the tropics
Swamp coolers are still used in lieu of a/ c in dry hot climates for house cooling
I use a damp terry towel wrapped around lunch meat butter and cheese for up to two weeks on canoe trips in Wabakimi and the like. Naturally there is no ice

A swamp cooler is a desert thing. It will not work in a humid area.
Basically, you have an open box with the openings covered with something like paper or cloth or sisal.
Inside the box is a fan and water pump.
You put a few inches of water in the bottom (hence ‘swamp’) then pump that water to the top where it flows over the pads to wet them.
The fan sucks air through the wet pads picking up moisture and cooling down, then the fan pushes that wet and cool air into the house. It works only when the outside humidity is very low… about a couple percent. Once the humidity rises, the swamp cooler fails.

Now as for the question, I often camp in Yuma, Az where it is often in the 90s in the winter but humidity is around a half percent. I keep a wet towel over my ice chest in the shade and it helps.
But, you know those mreflectix cozies people make for their camping pot to keep the pot warm and simmer? I made one for my ice chest and put ice in Friday am. Monday evening there was still ice inside.
You may wish to think about that. 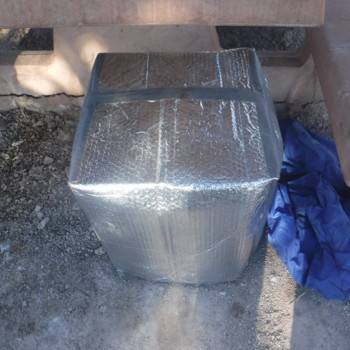 The larger the ice blocks in the cooler the longer it’ll be cool. I live in Texas and when I put three frozen Gatorade gallon bottles as ice in my 50 qt cooler plus all the pre-cooled food I can go for 3 nights and 4 days and stuff is still cool on the last day. Sometimes I top it off with a half bag of ice.

These frozen blocks of water don’t chill your drinks like ice cubes would but it’s cold enough for me.

I do keep a wet towel on the cooler in the boat as well, but that’s mostly for the dog.

We carry a large cooler for food & perishables.
We put in 2, frozen, one gallon water bottles, and 6 or 7. frozen, individual serving water bottles.
If there is any room leftover, we top it off with a bag of ice, or preferably a block of ice. That keeps things cold for the best part of 4 full days. There will still be some ice in the gallon water bottles when we get home. As ice in smaller bottles melts down, we drink the water.
Whether in base camp, or river camping we keep a wet towel over the top of the cooler.
The fewer times you open the cooler; the longer the ice will last.
For that reason, if we’re base camping, we have a separate cooler for soda, juice, milk, and beer. Makes for fewer openings of food/perishables cooler.

Our local fishermen are using the pricy YETI coolers.

Thanks for the tips! A thick wet towel it shall be.

@grayhawk, After my experience with YETI ice packs, I think its advertising claim is as mythical as the critter the brand is named after. My trusty $2 Coleman Chillers are 100% more efficient.

We used to pack dry ice and ice in the ice chest on the sail boat for two week races. Kept everything frozen for the first two days.

To change the water in a wet towel into water vapor (i.e. evaporate the water), heat energy is required. This heat energy, (known as the latent heat of vaporization), is dragged out of the remaining water in the towel, and so its temperature goes down. It’s an interesting phenomenon that occurs whenever there is a phase change, e.g from solid to liquid or liquid to gas. An everyday example is when a pan of water is boiled on the stove. If the water in the pan is left to boil away, and a thermometer is left in the water, it will remain showing about 212 degrees Fahrenheit, (at sea level) even though much heat is being pumped into it. This heat is required just to change the liquid into gas (steam). This heat seems to be “hidden” in the process, so it’s called “latent heat”.
So, yes, in relatively dry air, a wet towel is a good way to keep things cool. You only have to think about swimming in a river in your everyday clothes and then getting out onto the bank. You will soon be feeling cold.
Nick.

IMO, Yeti, while over-engineered and expensive, keeps stuff cold the longest down here in hot, humid Florida. I have never regretted buying my Yeti but they are 1) expensive, 2) relatively heavy, even empty. I use mine extensively for car camping and for leaving cold food/drinks in the car while kayak camping on islands nearby (where I can replenish).
https://gearjunkie.com/camping-coolers-kelty-yeti-igloo
Greg.

Off topic here. Yeti seems to have launched a hugely ambitious sales campaign in the last couple years. I had never heard of them before, and suddenly every store carries them. During group day-tripping get-togethers, most people leave their coolers in camp when they go out paddling for the day instead of leaving them in a hot car somewhere, and one thing I have thought of about the Yeti coolers is that they might be very popular targets for theft if left in camp, given their extremely high cost and sudden huge amount of fame regarding quality (rightly or wrongly so). It will be interesting to see if that turns out to be the case. I suppose one could lock them to a picnic table or a tree (best yet would be to put it back in the woods if that’s an option).

I’m quite happy with my DIY swamp cooler. I was raised never to bring a cooler on canoe trips ( as they were portage trips). So I never have. Even in Florida in the Everglades, And on the hot desert river trips I actually have cold not just cool fine box wine ( the box gets jettisoned before the trip as otherwise its a hot mess)

I just look at Yeti coolers and am glad I can waste money elsewhere! My kids gave us some Yeti Thermoses and I cringe at what they spent when I see the price tag.

When traveling in a van, we used to put our foam sleeping pads under the cooler with our down sleeping bags wrapped around and over it. A shiny-side-out space blanket went around all of it. When the cooler was left outside, we used a damp towel. Actually, we put a large bowl of water on top of the cooler, with a towel over it. We put a rock on the towel so the center would keep the towel pushed down into the water. It works.

Well, the wet towel advice worked quite well. Loaded the cooler at 6 a.m., I’m not a morning person and forgot to put in three of my Coleman Chillers. I did put a dry towel inside the cooler to fill up space. Cooler sat inside a hot car all day. Wet towel on top,
covered by a waterproof bag of gear. When class stopped for lunch, everything was still very cold. Class ended at 7 p.m., home at 9:30 p.m. The remaining food and water were still cold and the bottles of water were 75% frozen.

@Rookie said:
Well, the wet towel advice worked quite well.
When class stopped for lunch, everything was still very cold. Class ended at 7 p.m., home at 9:30 p.m. The remaining food and water were still cold and the bottles of water were 75% frozen.

How do you know that it was the wet towel that kept everything cold? I bet everything would have still been cold and the bottles frozen even without it. That’s not to say the towel didn’t help a tiny little bit.

and oddly enough - using a black towel might help : black coloured objects heat up quicker, but also dissipate heat quicker ^^
fun experiment - two identical thermosflasks, paint one matte black, paint the other white - pour in same temp liquid, close it off and let sit for some time and then measure the temperature of both - the black one will be a few degrees C cooler… daytime white towel, night time black towel ^^

@Rookie said:
Well, the wet towel advice worked quite well.
When class stopped for lunch, everything was still very cold. Class ended at 7 p.m., home at 9:30 p.m. The remaining food and water were still cold and the bottles of water were 75% frozen.

How do you know that it was the wet towel that kept everything cold? I bet everything would have still been cold and the bottles frozen even without it. That’s not to say the towel didn’t help a tiny little bit.

Admittedly I didn’t measure the air temp in the car, but it was hot enough to make a tube of lip balm mushy. And on previous trips that were far shorter, the frozen bottles of water thawed completely.

Now, was it the wet towel on top that gets the credit, or the dry towel inside the cooler filling up the space, or both? Guess I’ll have to keep experimenting.