A woman was visiting Kiawah Island and decided to pet an alligator. As alligators sometimes do, it grabbed her and dragged her underwater where she drowned.
A sad case of ignorance meeting nature.
She might be in the running for a Darwin Award.

It is worse. She walked up to pet the alligator and it drew away. Maybe snapped but regardless she still had her hand. The folks who owned the house she was at - the victim was there to do an at home nail treatment - were shouting at her to get away from the alligator.

Instead she then waded into the water and was standing knee deep or so. As she was saying maybe petting it had been a bad idea the alligator grabbed her and took her under. Authorities came but she had been under for 10 minutes by then. They recovered her body and shot the alligator.

I feel sorry…for the alligator.

The woman who was killed lived on John’s Island, which is the next island up the South Carolina coast from Kiawah. Alligators are everywhere down here; you’d really think she’d have known better. 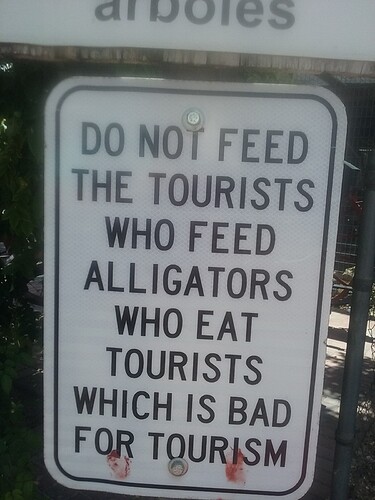 Instead of “Hold my beer” it was “Hold my wine”. This is going to be THE story in AA meetings for a while.