How do you dry your neoprene boots (mine are ankle high) after a day on the water? I rinsed them at home in the bath tub to remove the river water and let them drain overnight on the tub, but they still stink and the insoles were still damp in the morning. How to you care for these?

I usually leave them out somewhere where there is ventilation. Usually on my front porch. I also always tilt them so that any excess water drains to the heel area.
I think neoprene will always have some kind of odor, even if you wash them with detergent. I have never tried any of the specialty products for removing odor from neoprene though, so I can’t speak to their effectiveness.

tap water rinse, let drain for 15 minutes or so and then its off to the boot dryer (Peet brand) for an overnight drying. If the boots/shoes form a snug seal around the shaft of the dryer I slip a small bit of PVC tubing in the cuff to allow the warm air to escape thus preventing moisture build up.

Dryers are fairly inexpensive and something I consider a must-have bit of gear for the paddler.

Rinse the salt and questionable water off. Remove shoe liners. Lay all of them on a short wall (away from dog) at the front of the house in the sun to dry. Occasionally soak in soap solution and sun dry.

A mitten tree for neoprene gloves. When I wore neo boots (before switching to Astrals), they went on the tree as well. Placed either outdoors or near my wood stove. Only time I use neo is when the air temps are in the 40s and below - which here, is now. As to stink, try a vinegar water spray inside the boots. Vinegar is antifungal as well. 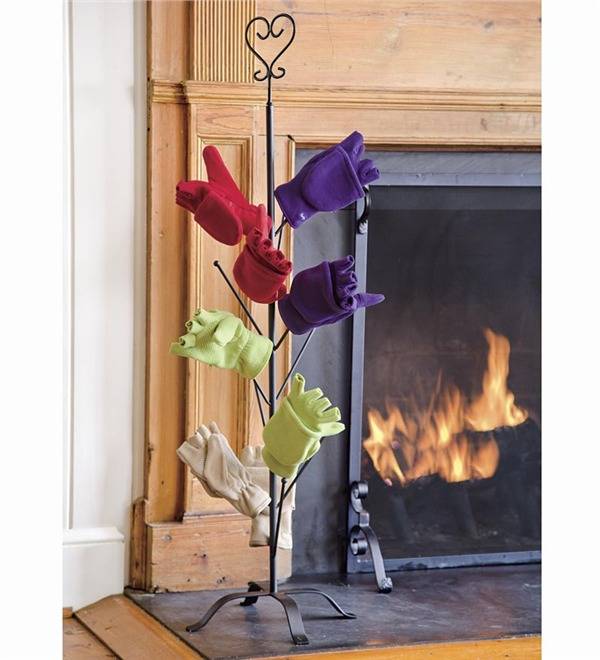 I use one of these…

The sooner they are dry, the better.

After a day on, or under, the water, I dip pretty much everything Sink the Stink or a similar product. Works very well and on a per-use basis, very inexpensive. It’s widely available (Austin Kayak, REI, Amazon, every scuba shop).

The best thing you can do is dry them in the sun, if possible. Barring that, stuffing them with newspaper will remove the bulk of the moisture quickly. You’ll probably have to do it a couple of times to get them completely dry.

More important is preventing the stink in the first place, which is actually quite simple; you just need to wear socks in your boots. The bacteria that cause odors feed on skin oil and dead skin cells. Wearing socks prevents these things from accumulating in your boots, so the bacteria have nothing to feed on. The end result is odor-free boots, provided that you dry them sufficiently between uses.

All you need is a Peets boot drier. I just empty the water out of them and stick them on the drier. No rinsing, washing etc., etc. required. Been doing this for years and there is no odor after they dry. You should be able to find a single pair drier for around $29.95.

After EVERY paddle, rinse immediately, soak 10-15 minutes with dish detergent or bar soap suds mixed with hot water, rinse well, and then prop up in the sun and/or wind so that the boots’ insides get some direct sun. If necessary, bring indoors and finish with a boot dryer.

The longer they stay damp, the more likely they will stink, so do this ritual ASAP and leave in the sun as long as you can. The climate you live in greatly affects drying time. Here in CO, they usually are dry the next day so I rarely need the boot dryer. But in WA, it almost always took longer than a day.

Like bnystrom, I use wadded newspaper. It quickly removed the water so they dry much faster.

Thanks for the experiences. I was hoping to avoid making or buying a boot drier, but that sounds like the most reliable way to go. I may have to build one like the one my neighbor uses to dry his waders. He uses a light bulb as the heat source and two pieces of PVC pipe as the uprights.

sounds a a fair amount more involved than a post-paddle dip in Sink the Stink.

Ditto on the boot-dryer comments. Nothing works better and not just for paddling shoes. I use mine year round, for all kinds of boots and shoes. There’s hardly a week that goes by that it doesn’t get used. Been using it 20 years, and should have bought it 20 years earlier than I did.

I just rinse mine with hose really good then drain them. then small fan blowing into them .

Hang them from a hook in the cellar. My wife says that the cellar (and usually my car) smells like a pond. Smells like fun to me…

@Monkeyhead said:
sounds a a fair amount more involved than a post-paddle dip in Sink the Stink.

Except that StS and similar products don’t work well in my experience and are largely a waste of money. You can accomplish the same thing with a quart of water and a cap-full of bleach. If you wear socks in them and dry them properly, you don’t need anything more than a tap water rinse after use, to remove salt, sand, mud, vegetation, etc.

I have neoprene shoes Chotas just rinse and dry never smelled and 7 years old. I do have some wetsuit cleaner but never used it.

In my experience it works pretty well, although I haven’t done the controlled experiments that would allow me to say that definitively. All I know is I use to have some problems with stinky gear and now, after using these types of products, I don’t. I see also that about 100 Amazon users have given it a 4-1/2 star average and about 20 leisure pro customers have given it a 5-star average. Maybe bleach also works. I haven’t tried that. Anyway, the expense is fairly negligible, at least for the casual paddler, as you only use 1/2 oz per 10-20 gallons. Also, I’d say that wearing socks is not a cure all. First, you have to wear socks (I don’t even like to wear shoes)! Also, maybe it’s specific to the water I paddle in but much of my gear (and even my car seats) is prone to developing a bit of stink. I dunk everything (PFD, skirt, hat, paddle float…everything pretty much) in a treated tub of water and then set outside to dry.

@Monkeyhead said:
sounds a a fair amount more involved than a post-paddle dip in Sink the Stink.

Except that StS and similar products don’t work well in my experience and are largely a waste of money. You can accomplish the same thing with a quart of water and a cap-full of bleach. If you wear socks in them and dry them properly, you don’t need anything more than a tap water rinse after use, to remove salt, sand, mud, vegetation, etc.

For apres-surfing, I made this simple contraption. 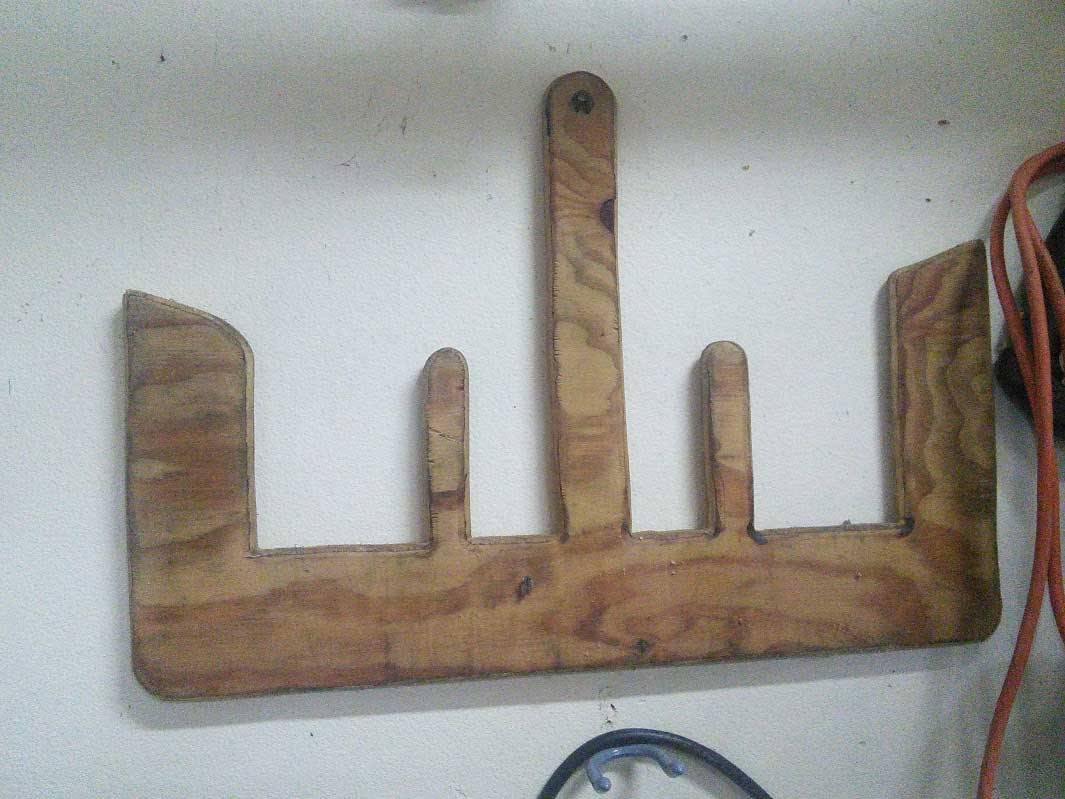 I hang it on something outside and put the booties and gloves on it, open side down.

These are the booties I wear: 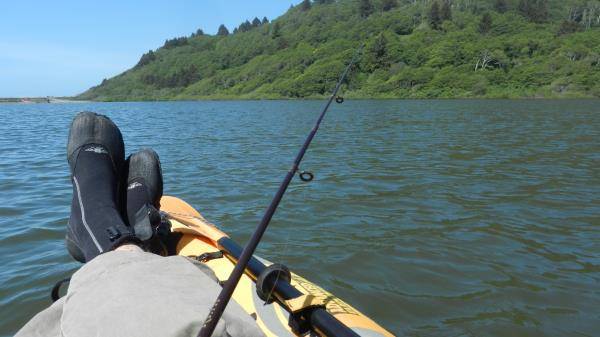 Socks underneath! Wow, I’ll have to try that with some wool socks.