I have seen this video on whitewater boating safety many times but not for quite a few years until someone recently posted it on youtube. It was produced in 1977 by the American Red Cross and the filming was done on the Nantahala and Chattooga Rivers. It has been widely used as an instructional video by numerous paddling clubs offering instruction in years past.

Equipment shown is quite dated. This goes back to when the Nanatahla Outdoor Center was still using Army surplus rafts, the Blue Hole OCA was the best whitewater canoe available for both tandem and solo use, kayakers were still mostly paddling 4 meter long composite slalom-style boats, Extrasport zip-up PFDs and Seda or Ace helmets were hot items.

The foot entrapment scene was staged, of course, at the rapid known as The Ledges on the Nantahala. There is some good instructional narration by Payson Kennedy. Although dated, the principles remain germane. 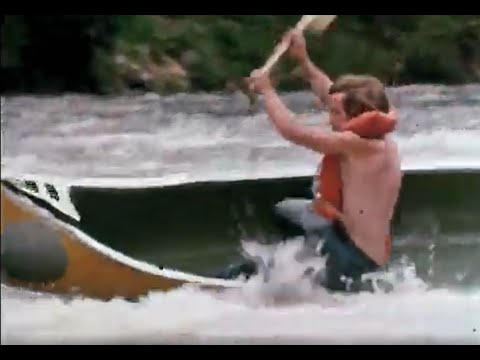 thanks for sharing that. While the equipment has changed, you are quite right, the key points of movie are still spot on: wear a pfd, dress for immersion (water temp), and develop the skills needed for your paddling environment (including scouting, rolling, river features). About the only thing they didn’t cover is drug and alcohol usage.

For years local law enforcement and search and rescue teams ignored water rescues. By now most places of any size have developed swift water rescue teams. The problem is that when people are in trouble the time window to rescue them is relatively short. Every one that runs rivers needs to practice rescues, and carry the right equipment like a long line and a Z drag. You and your crew have the best chance to save someone’s life. Many rescues are body recoveries.