There are other comments here about problems with the plastic kayak launches that are poorly placed but on Monday I had a scare when a paddler on a trip I was on misjudged the current, pinned against the launch and flipped. He wasn’t intending on using the dock as he has a homebuilt plywood/fiberglass/epoxy Greenland style kayak that really isn’t made for those launches. The river was high that day & current was quick. There is a cable & floats blocking the up-current side of the dock but it was underwater and, at that level, there was an inviting shore landing there. The dock system blocks the sight and easy access to the alternate wooden step landing just downstream. Most of the others on the trip made the turn to shore & pulled out easily. to add to the concern, the pinned kayak has an ocean cockpit & the paddler had difficulty finding the pull loop & was under water longer than I was happy with. Fortunately, he is very familiar with the kayak & experienced with being upside down in complex situations like surf and so didn’t panic but was able to pop the skirt off from the side and exit. The picture below was taken after he was out & stable. 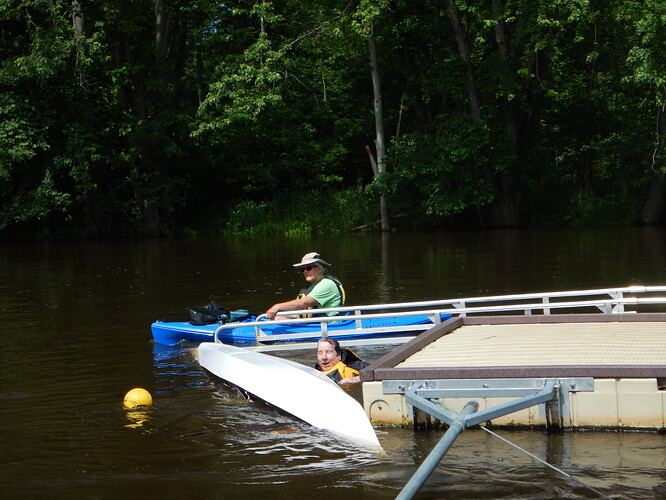