Hi all I recently purchased an Eddlyine Carribean and am trying to find a cart that will work with it. The Caribbean’s have a pronounced keel so the cart will need to provide plenty of clearance. I tried the Suspenze DLX but the groove wasn’t deep enough to accommodate the Caribbean’s keel. I’m hoping to find something relatively lightweight and portable that I can stow in the hatch while out paddling. Any Caribbean owners out there who have found something that works?

I don’t know about your kayak specifically other than a photo but, the cart doesn’t have to be at the extreme end of the boat. It can be further forward where the hull is flatter without ill effect. There are many carts to choose from but, I’ve been happy with the C-Tug since it breaks down into smaller components that stow easily.

I use the ctug on my caribbean and it works great.

Thank you I was considering the ctug glad to hear it works! 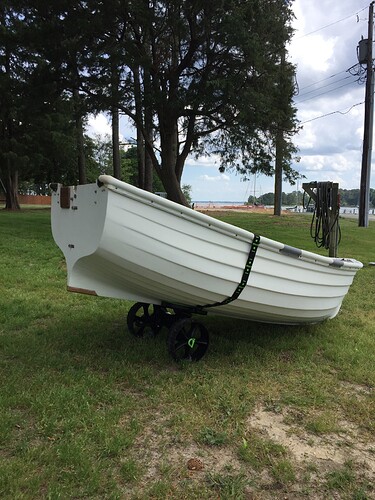 This is my 8’ dinghy weighing around 150 lbs with all the gear in it. I used the C-Tug cart to haul it about a half mile over a dirt/gravel trail with some occasional roots. It performed perfectly.

For pronounced keels or deep shaped hulls, there are these:

…neither of which I have so I can’t comment on them. But the Paddlecart at least looks pretty indestructible.

Thanks everyone for the suggestions! The Paddlecart looks like another good option. I’ll probably go with the ctug since rnsparky says it works great with his.

For most carts, unless specifically designed to fit on the stern, you want to place them slightly behind the center of gravity. You want the cart to carry the weight and don’t want to have to be pushing down on the bow as you pull it.

Andrew, as a recent purchaser of a Caribbean myself, I’d like to know your experience with the cart search…did the C-Tug work? I am also looking at the Suspenz Deep V but the C-Tug seems easier to stow on board…thanks