Eddyline or other thermoform yaks: Durability

Mainly, I’m do lakes and rivers, Class 1 stuff. 90% of the time, I avoid rocks and other obstacles. With that said, you can’t always miss stuff in the river when you hit a little shallow spot or small rapid.

What’s the durability of the eddyline equinox type yak, or other thermoformed yak compared to a rotomold (which is what I have now).
I know there’s obviously a difference, but I’m looking for a longer lighter yak soon… but want to split the thing on my first trip.

I can only speak to my experience with Wilderness Systems “Ultralite” kayaks.

My wife and I bought two of them about 7 years ago. We liked the weight, the price and and the look. The kayaks were of good quality, very well made and appointed and we enjoyed them. But after about a year of regular (certainly not heavy) use on bays and lakes hers developed a split in a side chine. The local paddle shop fixed it for us, but after another month or so the other side chine of her boat split and my boat starting coming apart at the deck to hull seam. We contacted the shop again and they talked to Confluence (who owns WS) and were told that their ABS sheet supplier had had some quality issues. They offered to replace the boats but we were told that WS had stopped manufacturing thermoformed boats so the shop comped us for the kayaks’ full value and we traded up to fiberglass/kevlar kayaks and haven’t had an issue since. WS/Confluence were very professional and about a year later they started making thermoformed boats again so maybe they found a better ABS supplier?

So, again, I can’t speak for Eddyline - although they generally get a very good name around here - but personally I don’t think another thermoformed boat will be in my future.

General material comparison (not brand specific): thermoformed kayaks have stiffer hulls than thermoformed. For flat water, that means the boats are a little more efficient going through the water (any hull flex is wasted energy).

But stiffer hulls usually also mean more brittle, so less able to handle hard hits. The softer plastic of rotomolded will flex and absorb some of the impact if you hit a rock hard, where a thremoformed doesn’t have as much flex so either can withstand the hit it or will crack. Thermoformed are also made in 2 halves (top and bottom) which are then glued/taped attached. If you hit hard enough and it flexes one half but not the other, it is possible that the attachment point will separate.

All depends on how many rocks you hit and how hard as to whether a thermoformed kayak would work.

I have three Eddyline kayaks; Two here at home, the third (2008 Skylark) being paddled by family. The Skylark was dropped by a couple of guys on concrete. No damage.

The Samba I use for rivers. It’s been run into a few things as well as shallow gravel spots, but no dings. Just a few hull scratches.

Before I got my CD Prana I paddled my Fathom LV on Lake Michigan, whose beaches are not always sandy. Have done some surf landings into beaches covered with small rocks and once I misjudged and came into some big rocks hard. The noise it made was horrid. That landing did cause some gouges in the bow and hull, but nothing that can’t be easily filled with white Devcon Plastic Welder. I just haven’t gotten around to it. That’s one nice thing about thermoform: repair material is inexpensive and the process is pretty simple.

Now, had I hit those rocks during the winter, the damage may have been severe as thermoform gets brittle in extreme cold.

In all honesty, I’m more concerned about rocky beach landings with my kevlar Prana than I ever was with the Fathom.

I think Peter’s last sentence says it all.

It’s funny that this topic is here, as this is what I’d come by to post about. From the above, I’m pleasantly surprised at how durable this material seems to be. What sort of longevity do you think it has? I know people that are paddling fiberglass canoes from the 70s. If I were to get something this expensive, I’d hope it would hold up at least thirty years under normal to light use. Do you think it would?

The river by me is shallow, and in a 13km trio, you might “scrape” by 5 spots.
I’d like a 14’, lighter yak, but my rotomold is already heavy enough as it is, wanna stepnit up. I know Kevlar is t for. E yet, might not ever be, but I don’t want my new $2,000 thermoform to split open on the first rocknit scrapes over.

A reputable manufacturer isn’t going to sell a boat that will split with one collision. Thermoformed hulls are a single sheet of material . Sort of like the bumpers on new cars.

@music321 said:
It’s funny that this topic is here, as this is what I’d come by to post about. From the above, I’m pleasantly surprised at how durable this material seems to be. What sort of longevity do you think it has? I know people that are paddling fiberglass canoes from the 70s. If I were to get something this expensive, I’d hope it would hold up at least thirty years under normal to light use. Do you think it would?

Am guessing 20 years or more so long as you take care of the boat. That means not exposing it constantly to UV rays by leaving it on the beach 24/7 during the warm months. Keep it clean, supported at the bulkheads when not in use, and in a shady or covered area. A good marine polish helps protect against UV rays.

I have an old Skylark. Built in 2008. That was my second kayak, purchased used. Its original owner took care of it, keeping it in a shed when not in use. It was, and still is, in excellent condition. It’s still being paddled, but not by me. Photo taken of its new owner. Check out that old tiny front hatch cover. 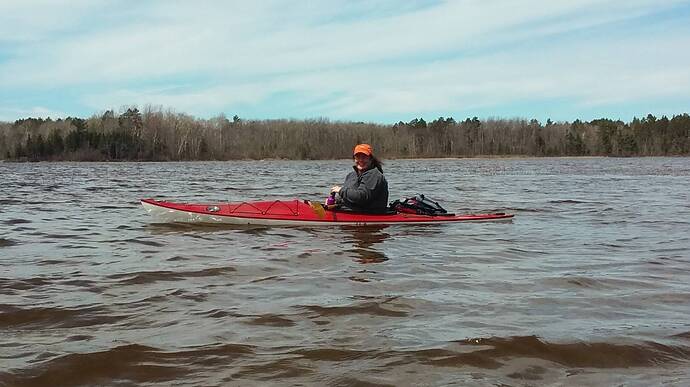 Thermoform is the most expensive and difficult of all the layups to fix and not that much more damage resistant than fiberglass so you really need to choose between a lighter weight and more frequent (but cheap and easy) with expensive fiberglass or stay inexpensive and nearly indestructible (but very heavy) and use plastic.

Thermoform is the worst of both worlds, expensive to fix and needs frequent repairs, not recommended for something coming into frequent contact with rocks.

Also please realize that thermoform and plastic can never be brought back to original spec but Fiberglass is not hard to do yourself and if you pay someone else to do it not that expensive so a fiberglass boat can be perpetually (And inexpensively) kept good as new as long as you limit rock impacts or contacts. But if rocks are a part of your paddling experience the best will always be plastic because it’s cheap and nearly indestructible so the only thing you really have to worry about is how heavy the damn boat weighs.

My friend had two eddyline Ravens both broke when surfing in ocean. Both repaired. Both now ornaments.

Fiberglass can be made stronger than original when repaired.

@CA139 said:
Thermoform is the most expensive and difficult of all the layups to fix and not that much more damage resistant than fiberglass

Devcon Plastic Welder is six bucks. Fiberglass cloth is five bucks a yard. Rubbing alcohol is two bucks if you don’t already have it in your house. Latex gloves, sandpaper, masking tape and rubbing compound are common household items.

A West System kit for small fiberglass repairs will run you forty bucks.

Friends combing broke on both eddyline kayaks repaired and still broke. Not happening with fiberglass.

Certainly my wife’s thermoformed WS boat never took any hits from rocks (we paddled mostly over sand) but both chimes developed splits midship.

Being formed from a sheet I was always a little concerned that the hull was pretty much a constant thickness all the way through albeit there was some strengthening at the bow and stern on the boats we had. I’d think that a fiberglass layup gives you more control over this and of course affords the option of materials like Kevlar and carbon fiber in appropriate areas.

Being formed from a sheet I was always a little concerned that the hull was pretty much a constant thickness all the way through albeit there was some strengthening at the bow and stern on the boats we had. I’d think that a fiberglass layup gives you more control over this and of course affords the option of materials like Kevlar and carbon fiber in appropriate areas.

For the difference in weight between ABS and a good roto-mold, I think I would always go with the roto-mold. The polyethylene boat will be a little heavier, but not that much. No matter which material you choose, generally if you treat the boat right, it will probably outlast you. Two of my boats are polyethylene and they both look like brand new boats and they have been used a lot. They never get dragged and are always stored indoors.

Anyway, poly boats are generally a little cheaper than thermoplastic and probably a little more durable. Stick with the better brands and if you buy used, be darned sure you know what to look for in regard to warpage and deformed boats that have been stored wrong. I would start with the bottom of the boat and if it is a mess of scuffs, gouges and scratches–walk away. You aren’t likely going to find a used one that isn’t a little scratchy, but too many paddlers don’t know the difference between scratching your butt and tearing a hole in it.

@Rookie, yes WS/Confluence and my local paddle shop took care of us. See post #2 in this thread.

And if I was to buy another thermoformed boat, I’d stick with a manufacturer that specializes in them…like Eddyline.

Well, I don’t have money to burn. For now, it seems like good old poly is the way to go. I really wish someone would offer a sit on top like the EL out of fiberglass.

I’m not sure of the difference between eddyline and Airalite, but my Perception Eclipse Airalite seems pretty bullet proof…