Good day all. I am a relative novice about to purchase a Gumotex Seawave for recreational use on Irish waters (nothing extreme) and would like whatever advice on the essential additional items I will require. I will be buying the deck and spray skirts. Items I am unsure about include PRVs and manometers, additional/different seats (packraft style seem to be a thing), the optional (expensive) rudder, wetsuit top (it’s chilly here), shoes, pump type, life jacket options, any other bits and bobs that experience brings…. Apologies for the long list! Thanks in advance Ian

What exactly are Irish waters? You mean a lake or a river?

Apologies for not making myself clearer. Will do light coastal (not extreme) and then recreational river and inland water bodies.

But no white water

You’ll never be sure what will happen on a coast. Whole new game. Definitely communication for the coast. 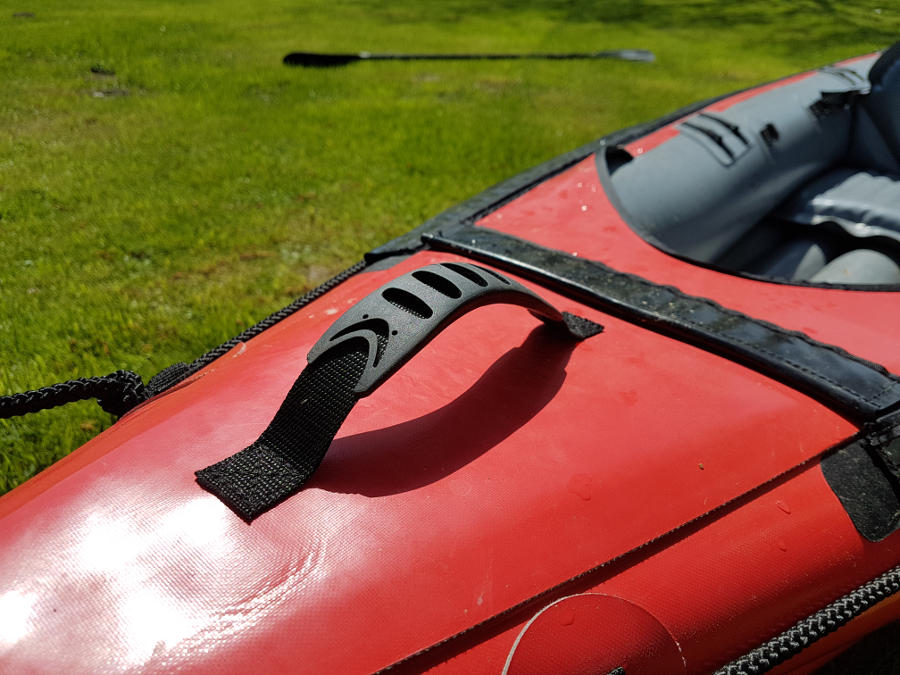 Gumotex/Innova Seawave Review The Gumotex Seawave is one of the fastest inflatable boats from the manufacturer and a real allrounder. It can be used as a 1, 2 or even 3 person kayak and can be paddled both open and with the cockpit closed. Therefore...

You’ll likely have a hard time in costal winds.

I have not ever seen a Seawave live, so can only go by the web site data and what I know of other inflatable kayaks. So some of what I say may be off.

Wind is the big enemy of inflatables. They do talk about building a keel into the shape of the kayak to help with wind, but in general it probably will be blown around much more than if you were in a hard shell kayak. Keep in mind a boat made to take between 1 and 3 people will not do well at that entire range of carrying capacity. If you are using as a single kayak, it likely would be even more impacted by wind than if loaded down more.

Inflatables are slower than hard shell. If you are paddling with folks in hard shell kayaks, they likely will go much faster than you.

Some inflatables can be designed to withstand pretty extreme conditions, like high level white water (but not all are). They talk about this boat being used as a sea kayak with the spray deck, and the video does seem it being played with in some minor waves. So it seems this was developed for some conditions. But the fact they want you to put a spray deck on means that it likely is not self bailing (as a white water inflatable would be). So if you will be using in anything beyond flat water, you may want to bring along a bailing pump.

On rudder, I can’t recall ever seeing a standard inflatable (besides the Hobies) with one. I don’t know if this is due to the price and inflatables usually being lower price boats, or due to not needing. Rudders are not meant to be used to turn your boat and control the direction (that is more efficiently done with turning paddle strokes), but meant to keep a boat going sideways to the wind going straight. Not an issue with standard inflatables, as they don’t turn up into the wind (weather cock), but instead just blow sideways. Only if his has enough of a keel that it weather cocks would you really need one. And that keel may only be effective when it has enough weight loaded into it for the keel to bite (that issue I mentioned about how if used as a 1 person kayak it will be more impacted by wind).

Great feedback thanks very much. I understand there will be some challenges with wind but have to make the convenience and portability trade off. I will definitely further investigate this rudder option as it’s quite an expensive extra.
Thanks again Peter.
Ian

Given what I’ve heard of the water temperatures there, you will need more than just a wetsuit top. You will need at least a full wetsuit. You always want to dress for immersion and have enough thermal protection to be in the water for as long as it may take you to be rescued or make it to shore if you lose the boat. If you lose your grip on the boat, especially with an inflatable, it will blow away much faster than you can swim. Don’t dress for the air temperature. Once you are in the water it is irrelevant.

For coastal kayaking I consider a VHF radio or other means of obtaining help essential, especially if paddling solo. Cell phone coverage can be spotty in coastal waters, plus few cell phones at this time are waterproof. Have your means of communication on you, not the boat.

Weather can change quickly, so be prepared. If fog is an issue where you are, a GPS or compass may be essential. Coastal kayaking is not to be taken lightly.

Always carry a repair kit and means to reinflate the boat. Most inflatables come with a repair kit.

For open water paddling I think the rudder kit is a good idea.

Anything capable of taking 3 people will be a kite with one person paddling in it. Even 65°F water will get you in trouble in short order.

Thanks. Will take serious care.

Fantastic advice thank you. I will definitely make sure I take the necessary precautions and kit up as you have outlined here. Will keep risks to a minimum.

Thanks a lot Peter this is very useful in helping me understand the issue of manoeuvrability of the craft in windy conditions, which I will as far as possible endeavour to avoid/minimise. I will also study more feedback on the rudder. Clearly paying great attention to tides, currents and coastal forecasts is critical.

Many thanks for the feedback. Have now ordered rudder, VHF radio and emergency locating device, and will purchase full wetsuit once stock arrives!