I may have just learned something the hard way. I recently got myself a Nova Craft Prospector, and being a confirmed kneeler, and my usual tandem paddling partner being a kneeler too, I set about putting an appropriate slope on the seats. On my solo canoes, I’ve always raised the back edge of the seat, or even raised the front as well since low seats don’t accommodate kneeling, but the seats on this boat were already a good three inches higher than those of any boat I have recent experience with, so it seemed natural to lower the front edge instead. That took a bunch of time since I had to build my own seat hangers, which seems easy enough except it required building a special jig so that holes drilled from end to end would be true, and would meet in the middle when drilled from opposite ends, and since no one builds hanger bolts long enough for the lowered front seat edge I had to build my own bolts from threaded rod, complete with completely home-made oval countersunk heads to fit the shape of the gunwale-hole recesses. Tonight I finished all the basics (still need some minor re-shaping of the wood that was oversized in cross section), and I set it outside in the grass and sat inside, … And I think the gunwales are too high! Methinks that raising the back edge of the seat instead of lowering the front edge is what I should have done from the start, but I suppose I’ll try it on the water first, just to make sure. Dope-slap time: Raising the rear edge would have required less than 1/100th the amount of time and effort in this case as lowering the front edge.

Anyone have experience with providing sloped seats in a boat of this type? I did NOT see this potential problem coming.

So how high is the seat, and is it comfortable for paddling. In my Wildfire(s), the seat drops are about 3/4" in back and 2" in front. With a 12.5" center depth, that puts the front edge of the seat at around 10". It’s exactly 10" in my Yellowstone Solo, closer to 9" in the composite Wildfire. Either way, I am basically is basically up at the gunwales. 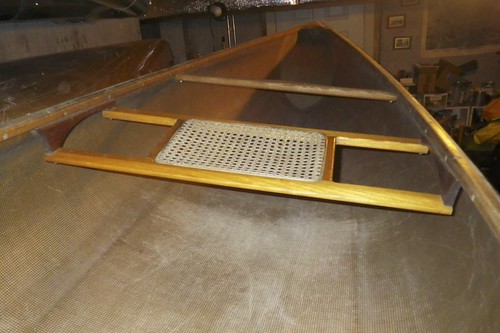 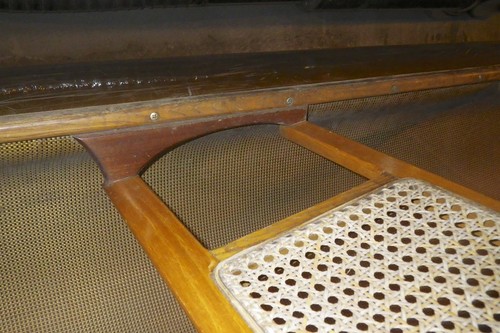 Your Prospector is definitely a deeper boat - 15" in the center, more like 20" out at the ends, but I still think you need to set the seats at a comfortable paddling height, and the gunwales will fall where they will.

You set up your Wildfire about the same as I set up one of my boats that has similar sidewall height. For this new tandem, I need to test it on the water and see how it feels. The good news is that the new seat drops and custom-fashioned bolts are already built, and if I want the seat higher, making another set, which can use standard bolts, would be easy. And I’ve saved the original seat drops for flat mounting the seat as well. We’ll see. I may even build higher seat drops and try the boat both ways.

You know…I never have given any thought to angling the seats in my Prospector. Probably mainly because I’m usually either standing or using the kneeling thwart. When paddling tandem and I want to kneel, the seat as it is has not bothered me enough to do anything about it. But if it did, I would probably make myself a copy of the Conk seat. I’ve been threatening to do that for my Sojourn, but simply padding the seat with this has been enough to curb the motivation. I use it in the Prospector too…

Interesting (to me) thing is, now that you’ve made me think about how I use the Prospector as a tandem, it strikes me that no one I paddle tandem with is interested in being anywhere that kneeling is actually required. I need to change that…

I’ve always canted my seats… I think that if you had raised the back edge of the seat you’d find yourself kneeling unnaturally high… and not as stable as you are used to.
IMO the important measurement is floor to front of seat. and the gunwales fall where they may… Now if you are double blading ( and I think a non heavenly event would happen first) you’d be knuckle banging.

Oh, by the way, I’d have to check again, but I think the front edge of the front seat is about 10" and the front edge of the rear seat is about 11". The front seat now slopes down by about 1.5" and the rear seat slopes about 1.75". Anyway, the point is that current seat height is still plenty high by many people’s standards, but I’ve noticed that a lot of tandem canoes put the seats quite high compared to solos, especially the rear seat. Again, we’ll have to try the thing out and see how we like it.

Yes, I cant seats in canoes that I intent to kneel in, and usually do so by raising the rear seat frame. In a lot of canoes with seats set up for sitting, I might wind up raising both ends of the seat frame, rear more than front, in order to provide enough heel clearance under the front seat frame.

I am surprised to hear you say that it feels like the gunwales are too high since you are fairly tall and seem to have plenty of torso and arm length. In what sense do you think they are going to be too high?

In truth, I have never really favored hulls with a traditional Prospector shape. The high ends with recurved stems, a throwback to the wood and canvas days. seem to be unnecessarily high and full and catch too much wind. So perhaps I would feel the same as you do sitting in the stern of a Prospector.

Pete, the sensation of the gunwales being “too high” comes from my natural reliance on them to brace my lower hand during the correction phase of the J-stroke or similar strokes, so this might be something rather unique to me. It seems like with my lower hand at the most comfortable distance from the blade, and thus at the most comfortable distance above the water (too far from the blade increases the effort that’s needed), my hand will be farther below gunwale height than I’ve come to like. My arms are definitely less robust than those of a lot of people, and a little bit of support being available for my lower hand makes a huge difference for me (I don’t like the other method - prying the paddle shaft against the gunwale on every stroke).

I agree with you about the recurved stems being a bit of an anachronism, but I don’t mind the height when it comes to keeping water out of the boat in light rapids. As an example of that sort of thing, the stems on my guide-boat are even higher (though without any recurve), but when I’m out in that boat in steep, wind-driven waves, that’s the only thing that keeps the boat functioning (it’s common for the water’s surface to get within a couple inches of the rail along the entire length of the boat when sinking into a passing wave, both at center where the depth is only 12", and at the stems where the depth is 24". Still, when going straight upwind in steep, head-high waves it’s actually common to submerge the rear stem when exiting the back side of a wave, but in that case the end decking keeps the water from pouring right in). In any case, you are right that a Prospector is not an ideal boat for calmer water when the wind gets strong. I considered a few different factors in choosing the boat, and I’m expecting to like the extra maneuverability. We’ll see.

@kayamedic said:
Go forth and paddle
Take some things you can use to elevate your seat
I’d suggest phone books but no one has those anymore
Seat cushions out of the house or something
Find what height you like

Good idea on the cushions. I have several old-style boat cushions, which are probably a little thicker than any seat adjustment I would make, but would still be worth trying. Also, I could grab some scraps of Styrofoam about an inch thick. That would be better than changing seat drops while out there.

Well, you have me thinking that I need to take a closer look at my NC Prospecter 16’. I am a fan of kneeling in my solo canoes & prefer to be on my knees in a tandem if things are a bit bouncy & that seat is too high to be comfortable. That said, it doesn’t get out as much as it ought to so & I don’t notice the height often. The prospector is a good canoe for what it is intended for - to be a wilderness truck. Emma & had no poblem with 2 weeks of gear & food for the Upper Missinaibi.

The high recurved stems on the Prospector were nice to have when I took it through the cl3 sections of the Weiser. Even with that, I took a little water over the bow. Wind must be dealt with. That’s why we have multiple boats.