I’m acting as “marriage broker” for another used boat exchange, in this case for a kevlar Wenonah Advantage. I have a local friend who hasn’t used the canoe (bought new about 15 years ago) in over a decade and wants it to have a new home, and another out of state friend who has been looking for one for racing. I have a good handle on kayak pricing but have no idea what to suggest to the seller on canoe values and he really doesn’t have a clue what to ask. He pretty much gave up paddling since acquiring a long term partner who is terrified of the water – has moved on to other hobbies.

I’ll have temporary custody of the boat next week – I know it’s in pristine shape. Research on past sales has turned up prices from $400 to $1200 for used ones. Guess I am crowd-sourcing feedback on this – for those of you single bladers who know this canoe, what price range would you expect to sell it for or be willing to pay for one in great shape?

if its pristine and a kevlar UL layup up to $1500 would be reasonable. $1000 would be a good price. With friend sales, I would price it as low as the seller feels good about. If it was craiglist I’d start at 1500. If the boat has little value to the seller I’d hook up a friend at 750.

I’m right there at $1000 to $1500.
I believe I paid $900 for a Prism in the Ultra layup last year. I thought it was a great bargain then. Prices have been up on boats due to lack of new inventory this last year so I think it would get $1500 on craigslist…

Thanks for the insights. The seller isn’t desperate for cash, just wants to see it put to good use and doesn’t want a lot of fuss in selling it. He’s pretty much leaving it up to me to arrange the sale but I want to be fair to both of them.

Honestly, where I live performance canoes are not in high demand and tend to languish at any price on CL. The main market here seems to be for anything under $400 that floats, can carry a large beer cooler plus several overweight bros and can be left parked beside the cottage up north all year.

If it’s in great shape I might take it for $1200. Do you deliver? I’d use it and it would have a happy new life in Michigan.

They make 2 or 3 kevlar lay-ups. If it’s the tuffweave 50-pounder I think it’s worth less than a lightweight kevlar lay-up.

Actually, I have delivered to parts of Michigan. Drove 450 miles to Muskegon 12 years ago to take the ferry across to Wisconsin to get my SOF kayak from a guy in Milwaukee. And hauled a Curtis Ladybug from here in Pittsburgh to Whitehall (between Muskegon and Ludington) last October to help out both seller and buyer who were fellow P-commers. I have kin and friends throughout southern MI (I lived in Bland Vapids for 8 years and both sides of my family have nearly 200 year roots in the state) . I will probably be making another trip there within the next 2 months just to see them. Boats fit handily inside my 16’ box truck conversion camper and if you threw in some money for gas I’d be happy to haul it if you can arrange a sale with the owner.

I’ll have custody of the Advantage next week sometime after I retrieve it from my friend’s brother in law and stash it in my boathouse up the street. I believe it is the lightweight layup (Ultralight/Aramid) because I seem to recall he told me it was 32 pounds, about the same as my little Lady Bug. I’ll confirm that with my scale when I have it in hand – can also check the S/N. Will also take photos of it to post for inspection.

Thank you WL. I was in Ludington just a couple of weeks ago. I think I’ll pass on the Advantage even though I’ve been considering one. Used canoes are scarce (solo canoes are especially scarce) and prices are high due to covid so if the boat is in great shape you might post it for $1500 since there’s a good chance that someone may grab it.

Tom, following up on our exchange 3 weeks ago about the kevlar Wenonah. I picked it up for my friend yesterday and have it in custody, It is, in fact, the ultra light Kevlar (actual weight 32 pounds) and per the S/N is actually 1988 vintage. It has not been in the water since it was stashed in the barn in 2004 (last PA launch permit sticker) and clearly had little use before then. The boat looks nearly pristine other than a few scuffs along one side. I took these shots when I got back to my house with it, after taking the car and it into a DIY carwash bay and thoroughly hosing off the cobwebs (and a little bird poop). Since taking these shots I have used a Magic Eraser to take some crud and light oxidation off the aluminum gunwales and they are bright and shiny now.

Don’t know if this tempts you, but if you know other canoeists who might lust after this boat, keep me in mind. I still am waiting to hear back from the canoe’s owner about what he is willing to let it go for. I suspect he will go with my recommendation (not over $1200). Since the most recent catalog price on this model is $3,099, that’s a pretty good deal.

I am trying to resist testing this out myself on the water while I have custody. Having watches a couple of videos of people paddling one, I’d be afraid of being tempted to add it to my already ridiculously large fleet. 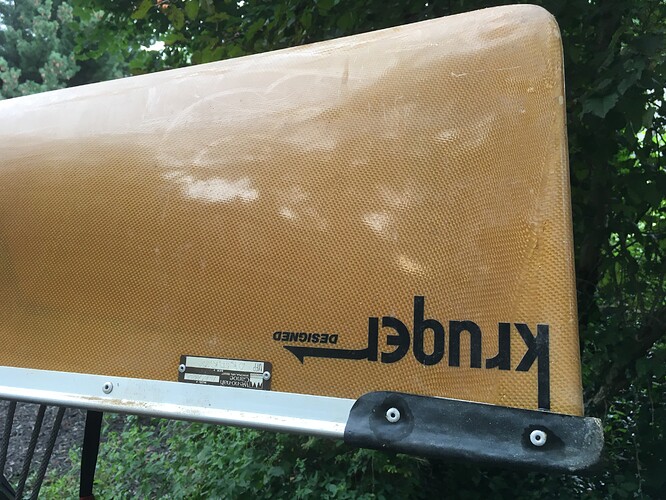 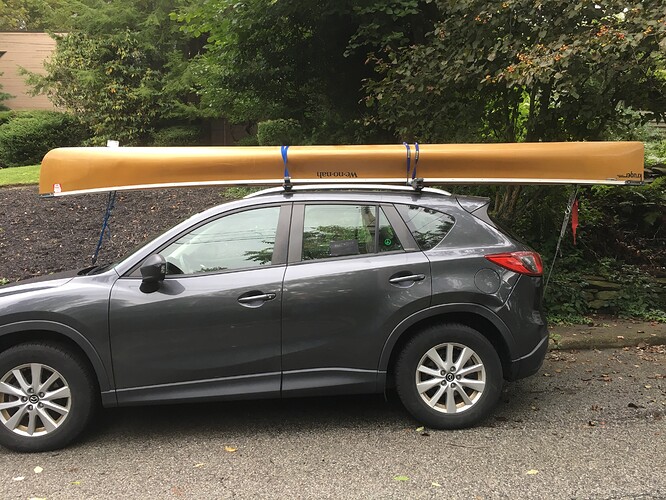 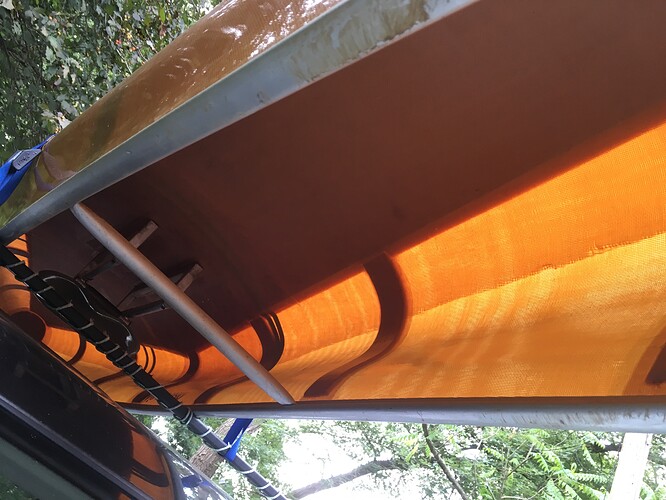 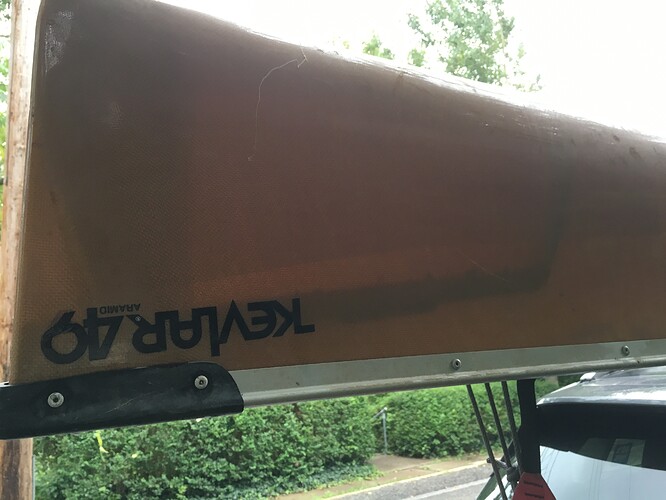 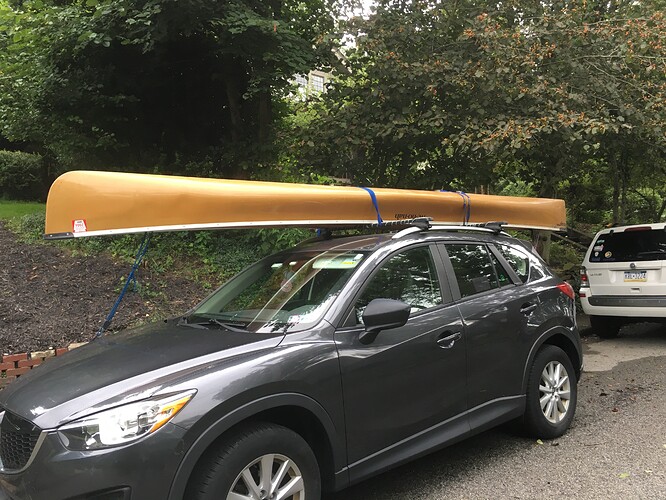 You’re the devil! Get thee behind me, demon…

(I have not even set up or paddled the second to last boat I bought in the past 6 weeks! Don’t tempt me to add another to the hoard!)

You know you want to…

I think as a responsible middle person you need to make sure it will pass an on water test.

Fortunately for my wallet (for the time being) I just saw the forecast for continual rain and thunderstorms here for a week. So the Advantage is going into the garage tomorrow joining several of my neglected boats. At least my little canoe will have some company of her own “species” (she has been over there with 3 kayaks since the solo canoe Rendezvous in June.)

Ooooh, I’d be tempted if it wasn’t so far. (Florida)

Well, yes it does tempt me even though I’ve been doing quite well being satisfied with the 6 solos I have. It looks like it’s in great shape. So - sliding seat with a foot brace? Please do let me know the price and when you might be headed in this direction. I’ll send you a PM in a day or two when I’m sure that I can’t resist it.

I talked to the owner last night and he confirmed he had bought the foot brace and has it but never installed it (so the buyer can place it where they want it based on their own best seat placement). I’ll get it from him this weekend. I presume the seat slides on the rail bracket it is mounted on – Looks like what is shown on the Wenonah site of the standard adjustable pedestal. And you can see it in the 2nd photo I posted above. I will be over at the garage tomorrow and will take some more photos of it.

I told him to think about what he wants for it and told him I had seen prices within the past year between $1200 and $1400.

I’d hoped to make a drive to Michigan sometime before the end of August but it looks like I will postpone at least until September since the public health situation has backslid recently (infections climbing even in our heavily vaccinated county). I’m supposed to get my #3 booster shot my mid-September. Not so much worried about myself but several of the relatives I would want to see are vulnerable due to health issues and therefore cautious about visitors.

If and when I do make my way there the canoe could easily ride inside my camper. My 16’ kayak fits in the box truck diagonally with room for the extra 6".

There is a local guy who expressed interest but he hasn’t called to arrange a test paddle yet.