Wanted to check out a possible point break for the longboat. Went out at 9 AM. Sun was out but the temp was still in the 50s. Definitely, a crispness to the air and the light NNE breeze. 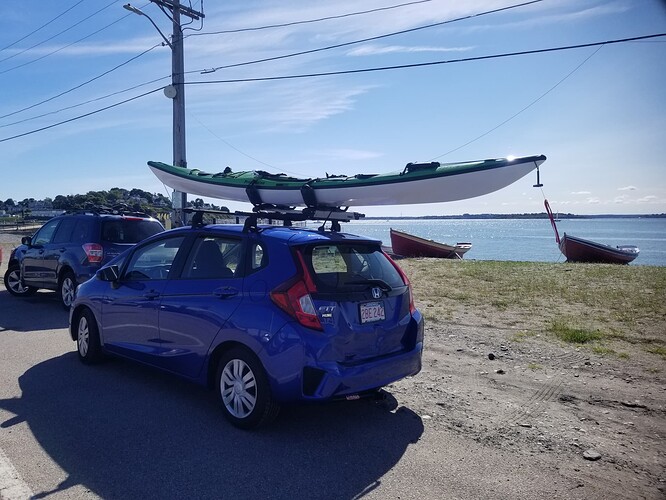 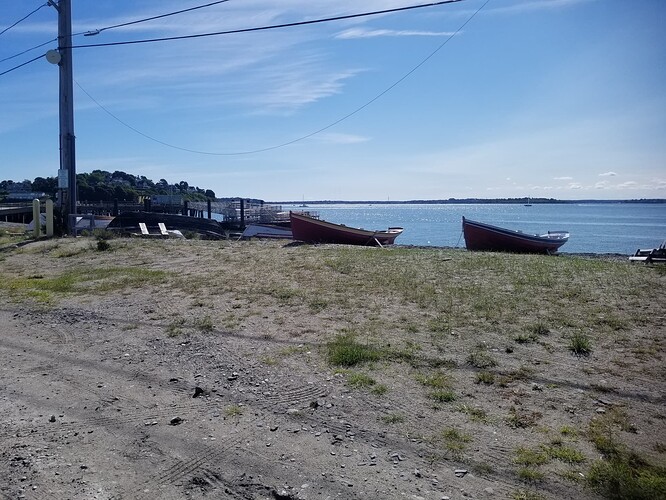 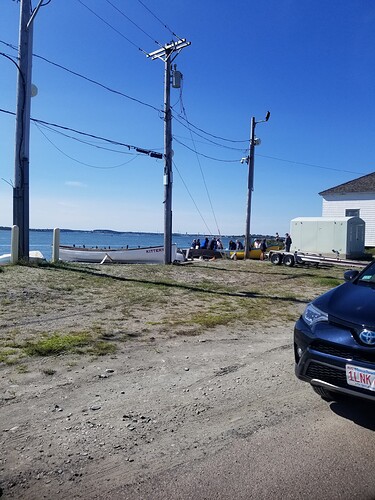 Paddled out from Pemberton Point through Hull Gut. The Gut is the narrow channel (around .25 mile across) that separates Pemberton from the tip of Peddocks Island. Lots of ferry, commercial fishing, power and sailing boats going through both ways. On top of that, have to deal with tidal currents that can surpassed 2.5 knots and shoreline of surf fisherman who can launch the heavy lures well into the channel.

I lucked out on the way out with only several powerboats in the channel and the ferry was still a mile out on its way in to the gut. The incoming tide was only in the first hour so the current wasn’t that strong yet. I paddled farther out into channel before heading out through the gut to give casting room for the fishermen. No drama going out, thankfully.

Heading east along the pennisula (the spit of land) that constitutes the town of Hull, it was pretty calm initially with respect to wind and waves. I hugged within 200 yards of the shoreline and got a good sense of the laid of the bottom and the shoreline. Mostly rocks and boulders. There were numerous rocky bars where shoaling or breaking would happen on a bigger swell day. Definitely not the route to take on a a bigger wave day. As I got closer towards the point (2.75 miles from the launch), the wind and waves picked up a bit as I ieft the lee side of some the Boston harbor islands.

I played a little bit at the point, trying to catch some of the short period, 1.5-2’ wind waves. The waves were running into a steep rocky shoreline that fronted a high seawall, and a higher hill with some big houses on top.

Needing a bathroom break, I paddled farther past the point and made a landing on the softer sand and gravel beach. Some guy came down from beachfront home with his SUP. He wanted to chat me up about the kayak, kayak surfing, etc. Being social on a beautiful, nearly deserted beach was not too taxing.

I launched back out through the wind waves and took a route that was farther towards the channel. There the waves were not breaking, just quartering and undulating behind and beneath me. The Sterling Progression really felt easy to paddle in these. I got back to the Gut in about 45 minutes. The current going through was much stronger and the boat traffic busier than earlier in the day. I picked a line that was closer to shore than what the boat traffic was taking. Once inside bay, had to crash through one squirrelly eddy line and then paddled the another 50-60 yards to the launch. There I did two rolls on each side, landed the kayak and was done.

After cartopping the kayak and changing into dry clothes, i headed to the shorefront burger joint for a couple of chilli dogs and watched the boat traffic. My timing was good. A sail regatta was under way. Nice entertainment for my late lunch. 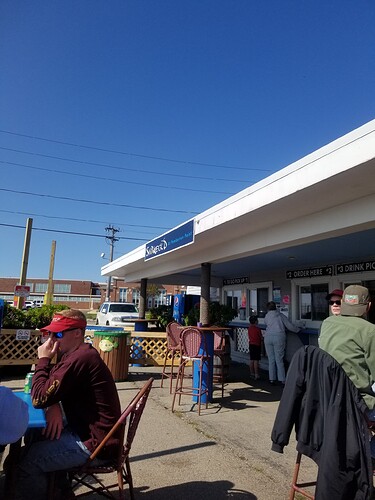 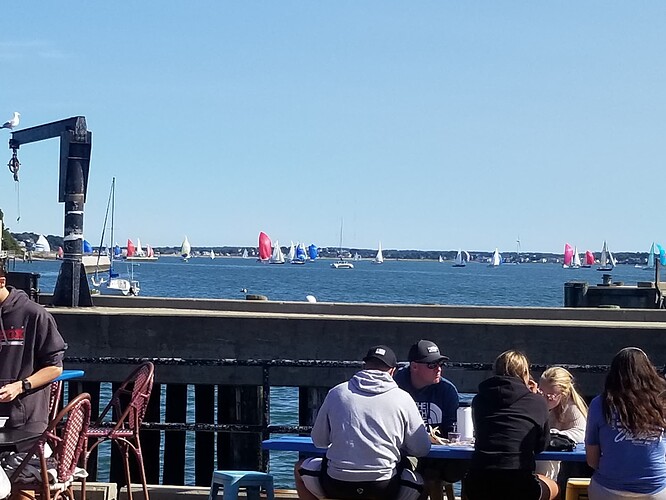 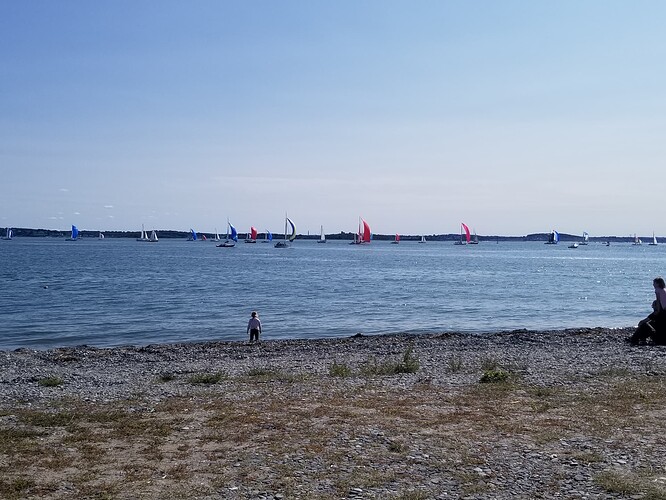 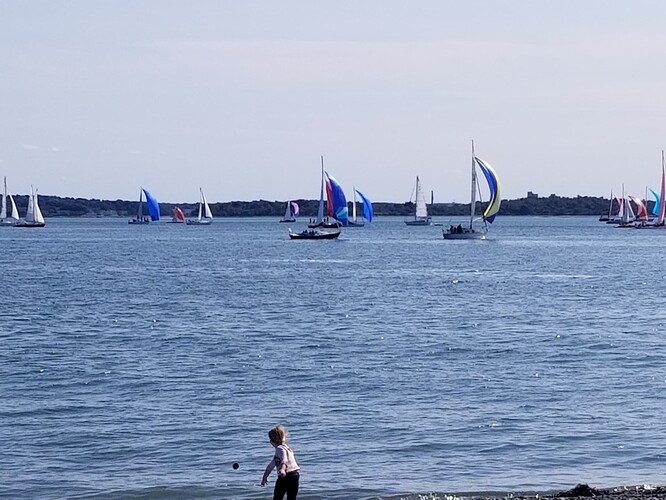 (Had the GoPro along. Haven’t check the video yet.)

Fall seems to be in a hurry to get here for sure. Tomorrow looks like it will be the last day in the 80s for us, so I’m heading to the beach. I may bring my whitewater boat along too.

Sing, Nice day. Thanks for describing where you paddled…was very easy to look up since I don’t know your area.

Get your WW boat ready for next weekend. Should be seeing long period Fiona groundswells then.

I have actually kayak fished farther out from the Gut, in the deeper channels following the shipping lanes. Some great sea bass and tautog fishing in the deeper rock piles 40-50 ft below.

This is the first time I have actually paddled right along the shore line because I wanted to scout the possibility of long boat surfing along the pennisula and more specifically at the point. My assessment is that, it could be fun on smaller days with 2-4’ swells, because the rocky bottom is relatively stable and will have set wave breaks. I would need to paddle farther out in the channel to safely get there, rather than closer in where the waves can be breaking in any of the bars and boulder clusters.

It would be a no go for me on bigger wave days because any mishap and coming out of the boat will be pretty hairy. The bottom and the shoreline are pretty much rocks, boulders and barnacles. Not something I want to be swimming in with big breaking waves. 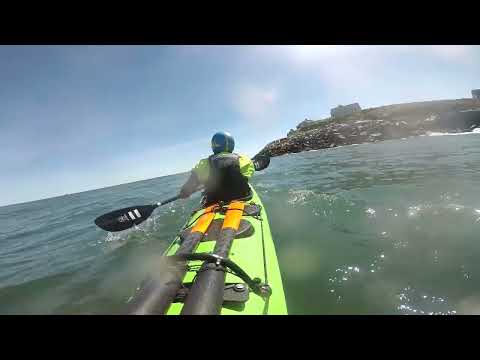 Too soon… Thankfully not yet though. 62° up here in NH. Comfy enough in a 3mm shorty and a dry top.

When I was surf fishing yesterday, I saw this one woman swimming in the Fiona swells. Just her bathing suit. She was going back and forth for about half an hour in the waves.

Turned out that she was parked right next to me at the parking lot. I said, “Hey, were you the one swimming out there without a wetsuit!?! Weren’t you cold out there?” She said the water is “still fine.” she apparently comes down and swims every weekend until…? I guess you can acclimate a bit.