I am looking to purchase a new or used canoe for family usage on rivers and lakes in WI. I have a large family (5 kids under 14) so being able to handle 2 adults and 2 kids is a must, but 2+3 would be nice. All of us are average sized height/weight. Ideally it would be able to handle moderately faster waters with class I/II rapids, but nothing super technical. Examples would be the Kickapoo, Eau Claire and Boise Brule rivers. Big water won’t be a priority, but we will use it on Lake Wissota a fair amount which can get a bit rough at times and probably Lake Superior and the Mississippi at some point. Mostly would be used on small lakes and slower moving/bigger rivers though for day trips. Hopefully a couple of weekend over-nighters, but probably not week-long expeditions.

Another consideration is that ideally it would be available at REI since I have a large amount of gift cards to use there. The three boats at REI that seem to fit what I am looking for are the Mad River Explorer 16 T-Formex, the Old Town Penobscot 164 or Discovery 169. Out of the three, the Mad River Explorer is what I would lean toward since it is lighter, sounds like it is a bit more maneuverable and has good initial and secondary stability. Also I have read you have to be careful how you store the poly boats. I do have garage space for it, but would need to get a hanger if I wanted to keep it top up.

However, another option would be use the gift cards to get accessories (paddles, car carriers, PFD’s) and get something else that fits the bill. If I go that route, I’d prefer used to keep the total cost down. A local outfitter has a Wenonah Champlain Tuf-weave used as well as some Spirit II’s, possibly some other options. I have been checking Craigslist and local eBay, but haven’t seen much at this point.

The Champlain is intriguing to be able to fit a lot of people and gear, but I am not sure if would would be maneuverable enough on the smaller, faster rivers. I also am concerned about its handling if it is just me and one of the kids or my wife in it since it is such a big boat. The Mad River Explorer sounds like it would be better for those considerations, but being 2’ shorter I think getting 3 kids and 2 adults would be difficult.

Out of the Champlain and Explorer options, which would you recommend? Would a Spirit II split the difference or should I consider one of the new OT’s at REI? Other recommendations welcome too, but as I said I haven’t seen much else available at this point.

Honestly, with five people you need (at least) two boats. The odds of the kids being happy for any time sitting in the middle is rather low in my experience. I’m not sure if I would want to be running class I/II rapids with a couple of kids in the middle as well. That said, all of the canoes that you list are pretty decent. The Discos are probably the best of the inexpensive poly boats. The MR Explorers are (or at least were in Royalex) outstanding WW tripping canoes. I started out tandem in one running up to Class III+ IV- water but that we with it fully air bagged and full expectation of some rather “entertaining” swims.

You are right, rival. When we all go, I will definitely have at least two boats (plan to borrow my brother’s) but there are still 7 of us, so if we have 3 in one we need 4 in the other. For tooling around flat water, I plan to have a few on our paddle boards, but would like the option to get a lot of us in the canoe. For any rapids I agree I wouldn’t want more than 1 in the middle, if that. Long excursions or over-nighters I am thinking we’d do no more than 3 to a boat.

Can you fit 2 adults/2 kids in an Explorer? Any experience with Explorer T-Formex? Is it close to the Royalex version?

Don’t worry much about the hull material in the OT canoes; I had a solo made by them and it was fine; I never even covered it. Flip it over behind the garage and throw a tarp over it if it makes you feel better.

I’d say get the biggest one on your list. When I was a kid my dad had a 17’ Grumman and it worked okay for our family of four, but my brother and I were little then.

No experience with T-Formex - just following Esquif as they developed it as a replacement for Royalex. Given Esquif’s focus & that both Wenonah & Mad River are using the material I’d expect that it does the job.

On two kids & two adults in an Explorer: How big is everybody and how active are the two in the middle? An Explorer has a large capacity. I’d say that my brother-in-law & I had maybe a 550lb load for 10 - 15 days (two trips) on the Missinaibi. If you have two large adults and two active mid-size kids it might get interesting depending on the adults skills.

Our kids got tired of the middle seat rather early in life. The older at 8 and the younger at 6.

Adults about 320 combined, kids about 180 combined depending on combinations, so probably around 500lb of people. Add another 50 pounds of gear (jackets, paddles, drinks, etc) and we’d be just about your 550.

I did go look at the Champlain this afternoon and I am very tempted. It is a 2015 and looks to be in very good shape. Interior is flawless and bottom has a few minor scratches in the gel coat, but doesn’t look to be anything to be concerned about. They want $1500 for it, which seams reasonable. Price is firm. Thoughts? 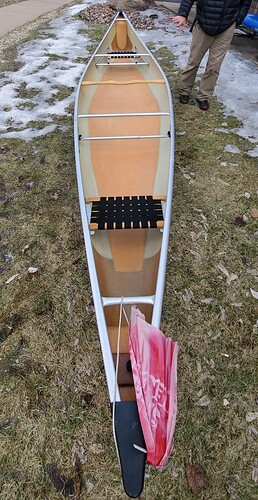 I would like the Champlain for what you are doing. Will you, I don’t know. What are you and your canoe partner’s skill levels and experience? For quick water you will want to be reading the water well ahead & have a number different paddle strokes in your quiver. The price does look pretty reasonable.

I just read your narrative. I highly recommend the Buffalo Canoe 16’ Tandem/solo made with T-Formex, a commercial grade plastic.
You can visit buffalocanoesmanufacturing.com
and see for yourself😊

I have a similar craft the Wenonah Odyssey. With a big load it is a superlative lake boat ( used on Superior for multi week trips). With just two of us empty on a day trip it is a bucking bronco if waves come up. Seems it really benefits from a center load… I have not paddled the Champlain which may have a slightly different hull shape.

We have used our Odyssey for almost 30 years. On a calm day with the two of us it is fine. We have used it on the Allagash RIver in high water ( it is kevlar…and kevlar does not take kindly to wraps around rocks) and it is surprisingly maneuverable in class 1 and low class two