I just bought two Feathercraft K-Light plus kayaks. They were built in 1998. Overall they are in very good condition for their age. One has some damage to the ‘seat hammock’ which will be tricky to repair. On both the cordura deck is faded and the seams need to be resealed. I haven’t tried to disassemble but they were left assembled for the last 8 years so I anticipate some difficulty with the frames seizing.

I’m aware that Feathercraft is closed and no parts are available. I’d appreciate any tips on Maintenance and restoration. 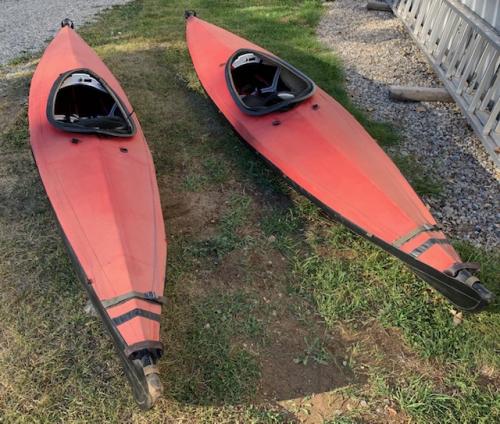 If they were not stored after use in salt water and the frames were lubricated before assembly they might come apart OK. I bought a used 1995 Feathercraft K-1 in 2008 that had been sitting unused and set up in the owner’s basement for nearly 10 years – out of 20 or more connections, only one was corroded together. At the time Feathercraft was still in business and I was able to get a replacement.

Get a spray bottle of Boeshield T-9 bike lubricant and saturate the pop up buttons in the central expansion bars in the cockpits first. Let the stuff sit for a while to penetrate. It won’t hurt the skin (Boeshield was formulated for Boeing to be usable as an aircraft systems lubricant and moisture exclusion compound that would not harm or degrade or gum up cable insulation and synthetic materials). But shoving some newspapers under the frame to control the overspray mess makes cleanup easier.

Once you can push in the pop up buttons and slacken the expansion bars you will be able to remove the two ribs closest to the cockpit and extract the bow and stern assemblies so you can work on separating them outside of the skins. Sometimes the careful application of heat (heat gun, not a torch) can coax mildly stuck ones apart.

There is a Feathercraft category on the foldingkayaks.org forums where you can find other brand specific suggestions from FC owners.

Watch Ebay and the foldingkayaks.org classified ads for FC parts too. There are some frame parts on Ebay right now for a K-1 from the same era. I don’t know if they used the same longeron extenders and other frame parts for the K-1 but I suspect that they were pretty standard amongst models for the same year. Other FC fans on the folder forums would know more about that than I would.