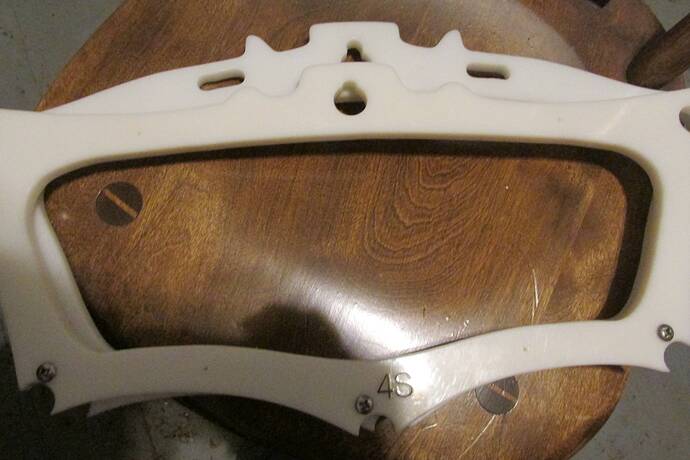 4608×3072 1.02 MB
so don’t understand why its smaller. the ebay listing that came with it says its an “S” from 1996. I had a heck of a time taking the frame out…after hour an hour had to ask my neighbor to hold the end while I pulled. only assembled it to putting in the extensions and called it quits when I saw 3 crossribs instead of 2 left. any tricks in getting the skin out, centered or any tips in general would help as well as info on the 4th rib…I saw the assembly video…now I know why he assembled it on a table but not practical when going to a lake or beach …certainly harder when on the ground… I’m assuming the 4s is for the S model?
semdoug June 26, 2019, 10:19am #2

Have you checked feathercraft.com? They are no longer building but are selling parts and have resources available. On vacation til July 22 though.

thx yes but didn’t want to wait a month

You might try asking on the West Coast Paddler Forum. It is BC Canada based and there may be more Feathercraft knowledgeable users there.

Is the kayak a Khatsalano or Khatsalano S? I haven’t paddled the S but have time in the regular Khatsalano. Very fun boat.

Was going to tell you that the 4S is an alternative rib that you install INSTEAD of the stock 4 rib. You set it up with the 4S if you are planning to roll it (lower top edge so it won’t cut into you when you lay back on the stern deck). Was also going to recommend shooting a message to Chuck Von Yamashita who owned a Khats for a while but I see from the folding kayaks forum that he already contacted you over there (as TsunamiChuck.)

I’ve owned 3 Feathercrafts but not a Khats. Yes, Feathercrafts can be a pain to assemble until you get the hang of it. Don’t give up – they are wonderful boats. I still have a Wisper, kind of the baby brother of the Khatsalano.

Download the assembly handbook and use that for set up – easier to understand than the videos, IMHO. And always always always lubricate the frame section connections during assembly with Boeshield T-9 to prevent them corroding stuck together. Especially critical if you ever paddle in salt water. You can get T-9 at most bike shops or marine supply stores.

Chuck already suggested wetting the skin and that does help. Assembly on a picnic table or other elevated surface makes it easier but when that is not possible, always carry half an ensolite pad or yoga mat to ease kneeling when you have to do it on the ground.

The secret to efficient assembly is in getting everything lined up correctly. One mistake I make regularly is sliding the seat support sling backwards onto the lower chine bars. The extension bars are the biggest pain, getting the spring buttons aligned before you crank them open. And especially with older boats, you have to always check to make sure the rib notches stay seated in the frame longerons as you finish assembly. They can even pop out when paddling. I carry a packet of 4" black plastic cable ties for when that becomes a problem.

The good news is that it eventually gets easier and faster with each set up once you get familiar with the steps (and potential mistakes).

Other thoughts: there are velcro tabs that fasten around the frame longerons – one or more might have been closed when you tried to remove the frame and it was stuck. You really do have to perform a kind of “folding kayak yoga” to get inside to align everything. If your model has the roll-down gear hatches on the deck, open them up so you can reach in from there as well as through the cockpit. A small headlamp or flashlight can be helpful.

Also, as you may already have discovered, the main ribs have a steel pin that extrudes from the lower molding and seats in the joint at the central keel longeron (by the way, longeron is what they call the long frame tubes but I think you probably know that from the directions). In order to engage or disengage it you have to bend the rib down at about a 30 degree angle. Once the big ribs are pulled out and the central expansion bars removed and the velcro tabs are opened, the stern and bow frame assemblies usually come out through the cockpit pretty easily.

Feel free to send me a private message if you run into other hassles with it. I’ve been assembling Feathercrafts for 17 years now since I bought my first one in 2002.

thanks willow for taking the time to tell me your tips and letting me know chuck replied … didn’t get a email about his reply. got another problem now I bent the tip of the extension lever and didn’t think I used much force…I’m 70…now it won’t be straight when inserted into the crossrib and don’t know what to do now

I bent a couple of the longeron sections 3 years ago when I stupidly hauled the Wisper set up on a too-close-together roof rack at highway speeds. I eventually was able to straighten them by clamping in the vise on my workbench and slipping a length of 3/4" conduit over the section as a leverage bar. Took a lot of time and leaning on them but I got them close enough. It should not matter if that top tube that you use for the lever bar is not perfectly straight so I would not worry about a little tweak in it.

I have to say my Pakboat kayaks are a lot easier to set up than the Feathercrafts. With those, you put together the frame inside an open hull and then the deck goes on with velcro and straps once the whole thing is assembled. A lot less “kayak yoga”!