Ferry gliding while using a rudder

I’m hoping this isn’t too dumb of a question, but I thought I’d ask it here since I can’t seem to find the answer I’m looking for. I’ve been kayaking for awhile now, but so far only in calm lakes. Soon I’d like to head out in to some bigger moving waters, namely the Columbia River. My 14’ kayak has a rudder, and although I’ve never found much use for it on calm lakes, I’m told I’ll probably find it invaluable in the often swift river currents of the Columbia.

So recently I’ve been studying up on ferry gliding in currents, and I think I’ve got my head wrapped around the basic concept. What nobody seems to reference much is how (if at all) the use of a rudder changes ferrying techniques. I’d be grateful if somebody could explain it to me in a way I can understand. I know the best way to learn is probably by doing, but I’d rather not get swept a mile downstream trying to troubleshoot the best use of my rudder.

I can’t answer your question, but from my 30 years of paddling a ruddered kayak , I never use it when in river currents or tidal currents. It does nothing but screw me up. I much prefer to do sweeps, and rudder strokes with the paddle.
The only time I use it is in strong quartering winds and when I am racing, and for those two reasons I wouldn’t be with out a rudder

What is a “ferry glide” anyway? Most effective “ferry” maneuvers are into the current, wave or wind. You have to paddle. There is no gliding…………for long.

You know that a rudder only works when water is traveling past the control surface, ie the rudder. A down river glide will not have sufficient rudder. You have to paddle.

The truth is that rudders are more of a trim tab than a steering device. .

Thanks for the comments. Maybe the reason I can’t find anything about using a rudder in current is because most people don’t do it. I just had a couple of people telling me, “you’re going to want to use that rudder out in the current” so I thought maybe I better read up on it some more.

I assume when you say ferry gliding you are talking about taking a ferry angle while crossing the current?

Ferry angle involves aiming your boat off of where you want to go in order to offset for the current. If you point a boat straight across a moving river, your paddling will take you to the other side, but at the same time the current will push you downriver. By aiming your boat upriver, you can make it so your boat would move straight across the river. Happens to be about 30 degrees offset for every knot of current for a person who averages 3 knot speed.

This is done by aiming your boat upriver. You rudder doesn’t have any impact on this, except in the impact it has in changing the direction your boat aims.

In general, a ferry is a maneuver in which you need to “aim off” of where you want to get. You need to do this because either current or wind are applying a lateral force on your boat.

Peter-CA described a typical forward or upstream ferry done on a river. Here you want to go straight across the river from side to side, but if you aimed your boat at the point you want to arrive at, a very strong lateral current would push you way downstream before you got across so you need to align your boat more upstream than directly across.

Another ferry might be done in an ocean environment in which you want to cross an open body of water through which there is a substantial tidal flow. In this case, you may not even see the current pushing your boat sideways because it is sitting in a large mass of water moving laterally. You still need to aim off of your target to wind up where you want to.

Or you may be crossing a lake in which there is a strong crosswind. In this case you need to aim off because the wind is pushing your hull leeward.

For river ferries, the strength of the current is not uniform more often than it is. On a wide, relatively deep river it might be relatively uniform for a good part of the way across, but current velocity is typically less toward the shores. On narrow shallow rivers with significant current, it is almost never uniform. And of course, tidal flow will vary over time and wind is usually not uniform. So with many ferries you need to adjust your “ferry angle” as you cross, sometimes repeatedly.

As for a gliding ferry, there are times during upstream river ferries in which you can utilize the trough of a standing wave to retard or arrest your downstream movement as you cross. These are called “jet ferries” more often than gliding ferries, and in these cases you are partly surfing and partly ferrying. But sometimes even a very forcible jet of current can be crossed with very little upstream paddling effort in this way.

As for whether to use a rudder or a skeg or not, I think there are times when it would be helpful and times when it would be detrimental. When crossing a body of water with a side wind a skeg or rudder could help resist the push on the boat laterally. Also, current or wind will usually want to push either the front of the boat more than the rear, or vice verse. In these instances, a rudder could help compensate for the tendency of wind or current to want to turn the boat away from where you are aiming.

For most ferries across current on rivers, a skeg or rudder would probably be helpful less often especially on shallow rivers. I have done a lot of upstream ferries on whitewater rivers in both canoes and kayaks, however, and have found that with highly rockered hulls that track poorly, having a hull with a bit of “edge” like a sharp-chined canoe or kayak can be beneficial. The chine can be dipped into the current by heeling the hull to add directional stability when variations in the force of the current keep wanting to knock you off your ferry angle. 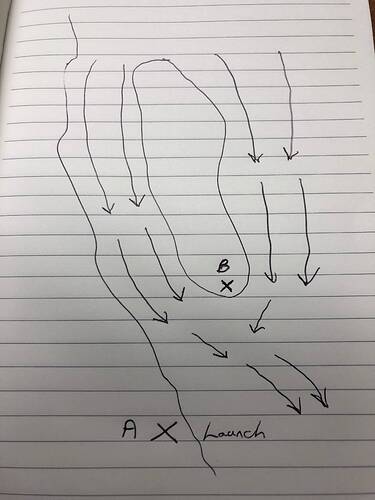 Thanks for the additional advice! It sounds like the rudder probably isn’t going to help too much. Maybe for the first time out in current it’s best not to add another complication in to the mix. Here’s a quick drawing of what I’m looking at doing for my first outing out in the river. This is an island out in the middle of the Columbia near where I live. The distance from launch (A) to the tip of the island (B) is about 1.5 miles upstream. Depending on the release rate from the dams higher up the river, the current through here can be deceivingly fast. My thought is to paddle upriver, hugging the shore, until nearly across and upriver slightly from (B), then ferrying across the narrow channel (about 1500’ wide) to (B). I just want to be careful about not getting pulled in to the current below the island tip because it will try to launch me out in to the main channel, which is about a mile wide in this section.

The exact angle to use will depend on the strength of the current. You will cross the channel fastest if you paddle straight across, but you will wind up well downstream of where you start your ferry. If you are confident that you can maintain your position relative to the shore in the strongest part of the current without fatiguing, you could start directly across from B, or nearly so. If you can paddle faster than the strongest current, you could even start downstream of B and make progress upstream as you cross, at least in theory.

Assuming you are fairly confident that you can paddle faster than the current, you can start out with a fairly wide angle of 45 degrees or so to the current. Keep an eye on your target as you go. If you can easily maintain your position by paddling however hard you want to go, you can keep that angle. If you start to slip downstream but are still able to paddle stronger than the current, you will need to either paddle harder or narrow your angle, but it if you narrow your angle it will take longer to cross, and you will have to do a good bit more paddling to do so. If you are able to maintain your position without hardly trying, or find yourself moving upstream, you can open up your angle toward 90 degrees to cross faster.

But what if you find that the strength of the current is much greater than you can paddle against? In that case, assuming you intend to continue the ferry, your best bet is usually to aim straight across with a 90 degree ferry angle. You will get pushed well downstream, of course, but this will minimize the amount of time you are exposed to the current. And it is the reason to start well upstream of point B till you have tested yourself against the current.

As to whether to use a rudder or not, a rudder will create some drag and presents more area for the current to push against. On the other hand, depending on the design of the hull of your boat, the current may want to tend to either point it upstream into the current or blow your bow downstream. In either event, you might find a rudder useful to maintain your desired heading.

Thanks very much, pblanc. That gives me a lot of think about and things to plan. If I was more patient I’d wait until the summer when the current is slower but I want to get out now.

“Today is a good day to die”

@roykirk said:
Here’s a quick drawing of what I’m looking at doing for my first outing out in the river. This is an island out in the middle of the Columbia near where I live. The distance from launch (A) to the tip of the island (B) is about 1.5 miles upstream. Depending on the release rate from the dams higher up the river, the current through here can be deceivingly fast. My thought is to paddle upriver, hugging the shore, until nearly across and upriver slightly from (B), then ferrying across the narrow channel (about 1500’ wide) to (B). I just want to be careful about not getting pulled in to the current below the island tip because it will try to launch me out in to the main channel, which is about a mile wide in this section.