The first nor’easter for New England was a doozy!!! We had power knocked out for days in our southern suburbs all the way to the Cape (including where my son lives). As of today, most of the power has been restored.

Anyway, the fun part – WAVES! We had been getting triple/double overhead for much of Wednesday through Friday with gale force onshore winds. Saturday, the waves diminished to 8-10’ but still with strong onshore winds. Today, was the pick so far with winds ,15 plus knots, going offshore to clean up the 6-7’ easterly swells in the 10-11 second range. The sun even made a showing. 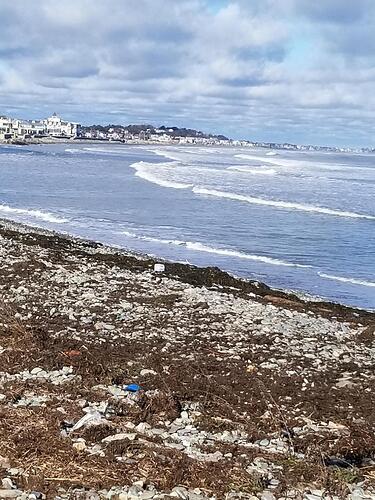 I headed out with the P&H Delphin 150, and the Gearlab Aukunack Greenland paddle and a mid tour Onno on the back deck. Wish I could report a great surf session (it might have been with a waveski, given the clean, steep, peeling faces), but I ended up with a lot of sprinting practice through the break zone and whole lot of “combat rolling” practice with all the maytagging I took. I got in maybe two decent straight runs in. But, more often than not, my bow got locked into the trough leading to a broach and/or maytagging. (had a couple of pitchpoles as well on some dumping faces.) I came out of one maytag, looked to my side, and luckily saw my spare paddle floating next to me. The bungee had stretched and ripped loose in all the turbulance. I bought along a GroPro but I noticed that camera was constantly knocked askew, or faced down by the breaking waves. (Will check later to see what footage I have.)

After a little over two hours, I came back in and called it. Just not fun to keep maytagging or getting bongo rides. Very disappointing. As I started to carry the boat back to car, I noticed that the skeg was deployed. Doh!!! No wonder the freakin’ boat would not respond to any attempt at turning/carving.

Anyway, still small surf for most of the coming week. Hope to sneak out for a dawn patrol sometime in the next few days and redeem to some fun and stoke from this nor’easter.

After reading about your day, all I can say is Yikes! Hope you get your redemption.

My left leg almost always deploys the skeg on my Delphin 150 when I exit it. Something about the position of the control slider.

It was fun at Odiorne state park in Rye, NH today too. We had the same conditions up here that you did, 7-10 foot swells, 15+ mph winds. My trip wasn’t nearly as interesting as yours though, because I definitely don’t have the skills or equipment for that kind of fun. I didn’t go far out, just a little bit out of the harbor at Little Bay. I’m not confident enough in in my abilities yet (this is my first year paddling) to have done my usual lap around Newcastle and Whaleback lighthouse in these conditions, so I stayed where I felt more comfortable. It was fun going up and over the large swells, the biggest I’ve paddled in so far.

Hey glad you had fun. You probably know to be careful positioning yourself with an offshore wind and ebbing tide at the breakwater mouth. Combined, the two factors can pin you against the incoming swells. Had that happen on a group surf session at the mouth of Braveheart Harbor in ME. One dude came out of his boat at the mouth. He was trapped between the ebb and the incoming, breaking swells. Heck of a rescue. Convinced him to let go of his boat, while two of us took turns towing him back in through the deeper channel (where swells weren’t breaking). But, his surf boat probably ended up in England or Ireland.

The swells yesterday varied in size and made it tricky to figure where to position oneself. Given my challenge in really controlling the boat direction on the wave, I admit feeling increasing uneasy because each ride would start to broach – sooner or later – and ended as much with maytagging or bongoing in on the big foam pile.

It was tiring after a bit. According to my Fitbit, I was in full cardio for most of the two hours.

Due to my lack of experience and limited equipment, I stayed out of the breakers. The current and wind was pushing me away from shore, so that was fun to paddle against. The waves gave me a bit of a push when I managed to time my paddling with them, but my boat doesn’t really accelerate that well, so surfing a rolling wave isn’t something I’m likely going to be able to do, but if the speed tracking on the Strava app is accurate, they did push me at up to 8.1 mph towards the shore and against the wind when I did my part. Although, I did manage to get my barge (WS Tsunami 165) to surf a little 6 inch wave that got me over a sandbar near the boat launch. Go me!!! Hahaha!

I have A LOT of learning still to do. Guaranteed I still have many years of learning before I get anywhere remotely comparable to the levels you and others are at. I’m just having fun with it and pushing myself a little more each time I go out, which isn’t as often as I’d like because I live an hour from the coast.

Early on, I spent a lot of spring and fall seasons (after crowds and parking restrictions were gone) longboat surfing 2-3’ waves at Jenness and Wallis beaches. Early in my waveskiing learning, I would take a couple of weekends each summer at the Dune Motel, getting dawn and sunset patrols in, while spending time with my partner during the day in Portsmouth (driving by Odiorne) - theatre at Seacoast Rep, or concerts/plays at Prescott Park. Great time. 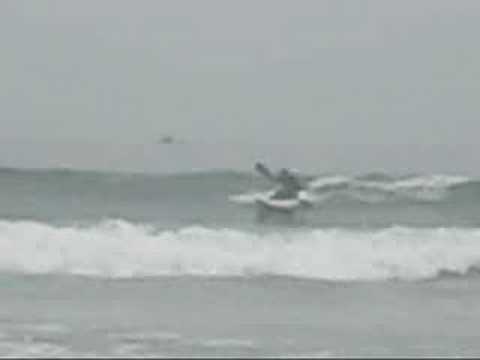 That’s exactly where I am at and it’s good to hear those are valid places to start out at. I have been wanting to get out at Wallis because it seems those are good “starter” waves. My only concern would be the fact that the waves seem to break pretty close to the shore and getting flipped might mean smacking your head/neck/shoulders on the sand. That, combined with the fact that I am still working on my roll, has caused me to not bother with it yet.

@sing are you still in the area? I had it in my brain that you were further south in the Boston area?

Yeah, Wallis is a bit more challenging with dumping on certain tide phases and more boulders. I would stick to Jenness until you feel more comfortable. The only set of boulders is just to the left of the public beach, which exposes on mid tide down. On the off season, you can go further down to right, where an outlet drains the marshes on the other side of 1A. Depending how much rain in the season and the amount of drainage, it creates some interesting sand bar formations and peeling breaks farther out. The drainage route also generally provides a rip current that helps to get you out beyond the break zone quicker.

I am in Boston, but I used to surf quite a bit up north when I helped loosely coordinate a group of “NE surf kayakers.” We would have sessions up at Jenness, York, Wells and so forth, bringing folks in from MA, northern NH and even the Northeast Kingdom of Vt. I still go up north, but not as much as I used to, especially during the summer when waves generally missed the breaks inside MassBay. But, when I travel, I find myself heading down to RI more because the Ocean State gets bigger summer (southerly) waves and the drive is generally shorter.

The only set of boulders is just to the left of the public beach, which exposes on mid tide down.

Does “just to the left” refer to the red circle here? 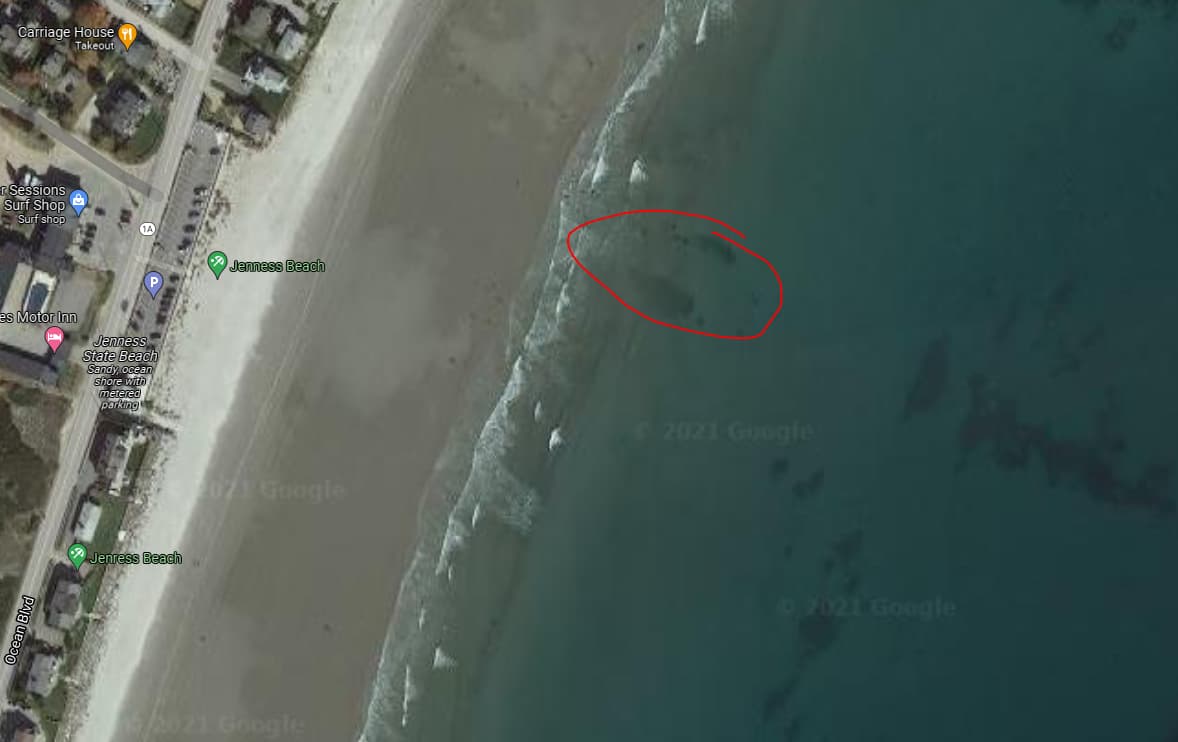 I see the marsh drain on Google maps as well, nice info on that.

Yes. That’s the spot. The only time I almost ran into those boulders was when I was surfing my RTM Disco/SOT (14’x26"). I could do long carves with that but certainly not the fast cutbacks as would a waveski. I dropped down a good wave face on a right diagonal run… Oh crap! I saw the boils the underlying boulders out in front of me. I just missed the big boulder and went over the little ones.

Always wear a helmet, even on a generally sandy break like Jenness.

As I was pulling the longboat out of the water, a boardie walked by – he stopped, looked, and asked, “Do you wave ride with THAT?” My reply was, “Well, let’s just say I tried…” This pretty much summarizes the footage that I salvaged of the session. I dressed it with music, but it is still a pig trying to be a dolphin in the waves. 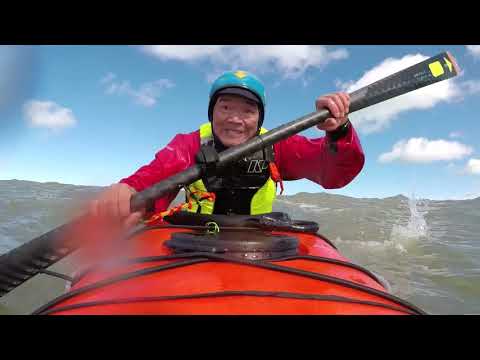 I am glad you enjoyed it. I took in so much water from maytagging and rolling that I had water coming out of my nostrils all evening, including over my dinner. Thankfully, my wife (and mother of two boys) takes these these visually off-putting incidents in stride.

Nostalgia - saw the old clip of the “NE Surf Kayakers.” We had a good core group from all over northern New England that got together whenever a good swell was coming in. This clip reflects well on surf kayakers with solid skills and good surf etiquette. There were great wave faces with maximal sequential riding on almost every successive wave coming in. 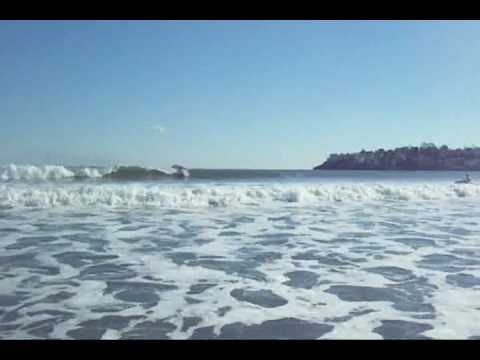 We had a pretty competent group and a peak time for about 2 years. But, all good things have an ending…

I finally know what this means thanks to that comment you put in your video! There’s a heck of a lot of “slang” thrown around that I think I know what it means simply based on context, but not enough to actually use/say it myself.

The small ocean storm coming up from the southeast will stay offshore. Not much rain but we’ll be getting 2-3’ swells @ 9-10 second intervals for the next 4-5 days. These are “perfect” (for me) to continue honing the longboat surfing skills.

Coming on the weekend, no need to get up at the crack of dawn. Just grab some Jo and “nourishment” from Dunkin’s on the way to the break. Breakfast for an adrenaline junky… Good to go!

Thanks for the lead. I am not on Facebook. Likely, will not (I have my silly windmills that I tilt against.)

Hope you get a break here and there from parenting. Gotta do it for sanity and good parenting in the long run.

I understand the fb thing. I only check it occasionally for the sea kayak, kayak surfing, and Boston fishing reports. Although now I’m probably spending too much time on Reddit.

Thanks for checking in on the parenting front. This was the first year I didn’t paddle in 15 years, did get a decent amount of time fishing in the power boat though. The wife is good about making sure we get some breaks, but I did miss camping this year fall, need to plan a late September trip for next year.

Good to see you’re getting out!