Hi there!
I’m looking to buy my first kayak used. Going for mostly calm days around Monterey/Santa Cruz, CA. In my budget I’m looking at a (blue)Perception Essence 16.5’ in composite material. As well as a (yellow)Elaho Necky 16’ in plastic of some sort. As I am new, could anyone direct me to which would be the better option if they have experience with these. Thanks in advance for any help! 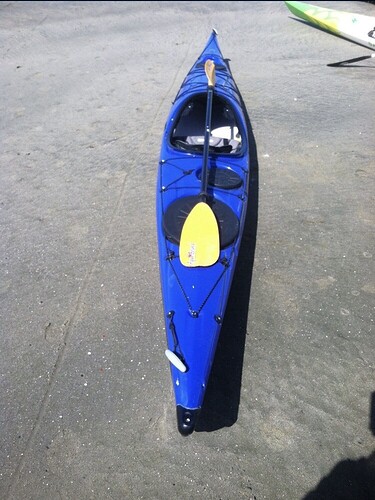 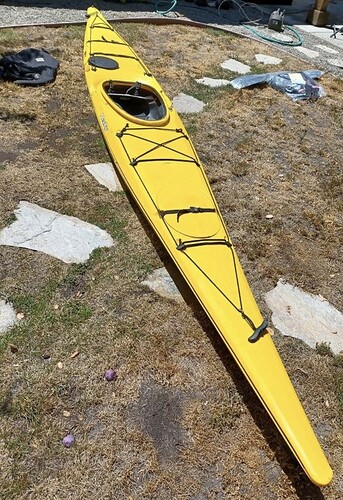 Both are decent kayaks for where you want to go. Both are below what I think they would normally sell for, assuming they are in decent working shape.

The end result should come down to which feels better for you. For example, at 6’ and 220 pounds I don’t fit in Elahos. But my 5’1" 110 pound girlfriend liked them. Even if you fit in both, one may feel more comfortable than the other. Optimally you would paddle both, but even just sitting in them on land would be informative.

If you haven;t yet, take an Intro to Sea Kayaking class so you can learn the basics, especially how to get back in to it in deep water for when you flip over. Monterey Bay Kayaks and Kayak Connection are two shops that do the classes in the Monterey/Santa Cruz area.

Thanks for the tips and advice I appreciate it! And thanks for the shop names, I definitely want to take a class.

I have been kayaking for many years and have bought and sold
many used kayaks. I suggest trying each of the kayaks before buying.
They all feel different to your body (seat, stability in the water, responsiveness)
and how they move forward in the water. Good luck, but used is a great way
to buy a kayak. Just get a great paddle (such as carbon, I like the Gearlab
one’s) a great sprayskirt (I like the Seals one’s), and a lifejacket. Cheers.

I went and saw the Necky, it wasn’t in the best shape but useable. The deal breaker, as you said Peter, it was too small. I’m 5’9” and I got my legs in but it was crushing down on them to the point that I couldn’t move them at all. Hoping to see the Perception in the next day or two.

It matters what year that Elaho was. The first y a ar or two were highly maneuverable with aggressive thigh braces, really WW style. The good news is that you certainly would learn to paddle. Those had a metal skeg. Great surf boats.

Subsequent years were more typical touring configuration, not the same boat at all.

My husband was 6 ft 1 inch and his first sea kayak was a first year Elaho. It fits if you are on the lean side but requires more comfort with a tight fit than newer paddlers tend to be comfortable with.

If you see a later year Elaho, give it a try. I can’t tell from the photo what year, but a lot of the original configuration Elahos were solid red or yellow. Later ones were often multi color fades.

@Celia Interesting about different versions of Elahos. I knew there was a skeg and rudder version (and most seemed to like skeg better), but I figured the only difference was skeg vs rudder, not that hull shape and such was also different.

@Andromeda You may not want to rush the purchase. Take some time to rent kayaks and take a class or two, as that time is also demo time to give you a feel for what boats you may like.

That said, if prices are good for used (as these 2 seem), and you are willing to do the work of reselling, you could always just buy the boat as a demo time. If you find it isn’t working out and want something different, you can resell and get your money back.

Earliest Elaho was a play boat. Subsequent versionvwas tamed to be more of a tourer.

There is a great affection fot the earliest Elaho among those who got the boat and played with it. But frankly, thatv is largely older farts now like me. Current paddlers don’t much like quirky.

Yeah the “Necky” I saw had a metal skeg and was a really tight squeeze, I basically couldn’t fit in it as I am a little on the thicker side.

I was interested in a better quality kayak like that perception but I took a bit of a detour. The guy was being kind of flaky. So I went to see a 14’ Elaho strait 140ex(not a recall model). From what I’ve read this is a bit of a downgrade quality wise such as leaky hatches etc. But I’ve gone out a couple of times and it works for me for now, just to get out and start enjoying the water. Plus it stores easier than a 16’. Just got back from Elkhorn Slough in Moss landing! If I use it 1-2 times a week this summer it will be worth the money spent. Then I will likely look again for a deal this winter/spring for a better kayak and trade up as advised. Not sure if this is a result of covid, but didn’t seem like there were many good used options out there. Maybe due to supply chain and in combination with lots of ppl buying outdoor and exercise equipment during this time and the last couple years.

Anyway thought I’d update in case anyone was interested, and thanks again for the info and advice!