New Year’s Eve storm also brought the first surf of the new year and decade. For January 1st, relatively balmy with bright sunshine, air temps in the upper 30’s but a stiff sustained offshore (west) wind of 25 MPH plus and gusts into the 30 plus MPH range. Explains the invasion of the wind buggies that were zipping up and down the beach.

As for surfers, probably a baker’s dozen of us taking advantage of nice 10-11 second wind swells in the stomach to chest range (4’ plus), cleaned up by the stiff offshore wind.

With my newer Infinity Stinger Longboard still drying out and waiting for a repair to the broken tail, I brought out the old Island high performance longboard ski (just repaired, after sitting in the basement for well over a year with two punched holes to the bottom). 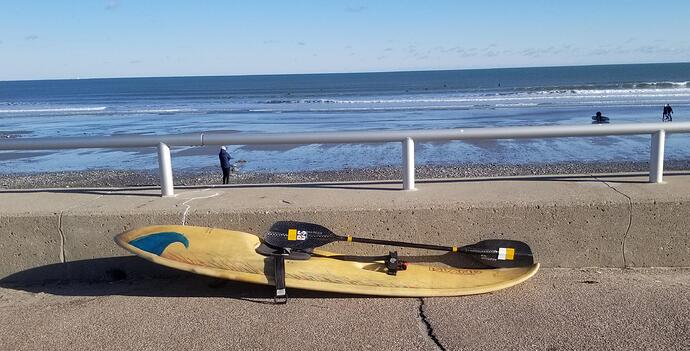 It definitely has less volume and is a bit tippier than the Infinity. Took some runs to get used to it again. Have to admit to spending a bit more attention and energy to stay upright against the wind than with the Infinity. I hope this sensation subsides over time as it really is not something to appreciate on colder and bigger wave sessions in the winter. For today, it was fine given the smaller surf. Got in a bit over 3 hours of wave riding. It is a pretty good start to the New Year!

Ouch how did you break your Infinity? Must have been a pretty good shot, mine has taken a lot of hard knocks and just a little broken glass now and then.

I managed to get really bad asthma doing a home improvement project for my wife, and have been having a lot of breathing problems during the holidays. Made it out once to SUP, now we have overhead surf tomorrow, hoping I can paddle out in a calmer spot and get some surfing in.

Sorry to hear about the asthma situation. I have learned the hard way to wear a good filtered facemask whenever I work on anything that requires demolition, sanding, filling, etc. Take it easy. Just as well as sitting it out. Some pretty BIG messy (dangerous) stuff hitting your side of the coast of the past several days! Hopefully, better sessions ahead for you in the new year.

Yeah, a bit of a story with my broken Stinger. Went out to the homebreak on a head/head plus day over Thanksgiving. Got complacent and surfed myself into the inside corner (far/topside) of the jetty in the pic. A strong rip runs out alongside that inside. I thought I was going to ride that rip out.

Got caught and flipped my breaking wave. Rolled up and got flipped again. At this point, I was trapped right along side the jetty boulders by the rip and the incoming waves. Good thing for the helmet and the impact vest! As I bailed, I saw peripherally one of the locals paddling like heck to get to me. I couldn’t hold onto the Stinger. Just had to let it go and try to get myself out of the rip and incoming waves. A bit of a struggle but I made it to shore on my own. In the meantime, the local had got onto the shore and secured my Stinger which had got picked up by a wave and surfed to shore without me (hitting the boulders on the way in)! The local dude was all concerned - You okay!? Were you terrified as I was watching you upside down in that corner!? I told him I was too busy trying to get myself out of a messy situation to be “terrified.” (This is a side benefit of full contact martial arts/adrenaline based training.) Anyway, told the local that I really appreciated him speeding over to help (surprised that he even saw the situation on the inside). Thankfully, I was no worse off from the wear, but the Stinger ended with a punctured tail bottom and long crack on the topside.

The Stinger has been drying out in the basement for over a month. Should be able to patch it soon.

Well I’m almost done with the big project; one more day, then I am going surfing every morning if it kills me. Getting pounded on a rocky jetty is no fun, I have done that before, I’m not sure if when you were out here I showed you “The Evil Jetty” (that was named by my oldest son Ian, several years ago) it’s an outlet to lagoon and he got swept into the mouth by a huge incoming tide and over head surf. I tried to swim to help get off the rocks ( dumb) then we were both in trouble. A bunch of surfers ran to help us but there was not a lot they could do. I got lts of rock and mussel rash but the waveskis were OK. (Maybe playing dead would have been a better strategy) The funny thing is I don’t remember being terrified while it was happening I was just trying to dodge the rocks each time the waves crashed on us and get back into the current to suck us off the rocks…its usually a couple of minutes later when you have a minute to think about it that you say …“never again” … and yet we’ve been back many times.

Scary story, sing. Glad your boat took the hit, not you.

Sing what is that paddle you are using? I’ve repaired my Onno paddles about ten times each. Yesterday I got rolled by a dumping wave and my paddle I patched together with PVC tubing and expoxy glass just came apart when I tried doing a power roll in the boiling mess. It’s fixable but I’m thinking it’s time for something more reliable. I’ve got a Werner Play and a couple of lesser known surf paddles, but nothing feels like my old Onnos.

The paddle in pic is a Big Spoon ww paddle - a heavy duty 180 cm carbon prototype - given to me about 15 years ago. Unfortunately, it never went into production and Big Spoon went out of business since.

The BS is tough paddle and have outlast two of my ww ONNOs. I liked the lightness of the ONNO but it was at the cost of durability, as I too had made multiple patches to the blades. If I need to replace the Big Spoon paddle someday, I would probably go with a custom Werner Shogun ww paddle. That has the same big blade and profile as my BS. I would have to custom order to get the 180 cm length.

Yes I’ve been looking at the Werner carbon white water paddles, but they are too long. Maybe I’ll have to custom order. I was going try a paddle Matt Barbarit was selling through his Solemanzi, but he did not have room to bring it to US when he came he’s since sold the company to his friend.

My understanding is that you can order a custom length and off-set from Werner. You just have to do it through one of their dealers. Probably calling/emailing Werner directly to get the low-down.