First snow paddle of the year

I managed to get out for a short paddle during the snow storm that hit the DC area yesterday. Launched from the Theodore Roosevelt Island parking lot at about 8am, hoping to have some nice winter sights of the monuments, but visibility was rather poor. The wind was averaging 10 knots, and it always seemed to be right in my face with wet snow.

After an hour and a half my fingertips were starting to ache from the cold, (neoprene gloves) so I cut the trip short. I was hoping Santa would give me some pogies or mittens for Christmas, but apparently I’ll have to find some for myself.

Another lesson: It’s a bit harder to load a kayak coated in snow onto the roof of the car.

Still, any day on the water is better than a good day off the water. 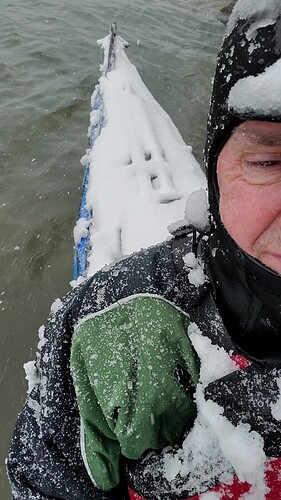 Very cool!!! Send some of that snow back up to us in New England. Love snow (or rain) and the surf waves that usually come with it.

Nice to know someone is carrying on the tradition. Good luck.

I’m waiting, but we don’t get much snow in southern New England any more. I need to head up north.

We got a little bit of snow on Friday - didn’t paddle, but at least I got out for a hike yesterday. Not enough for snow shoes, but still pretty in the woods. 16 degrees when we started at 8:30. 26 degrees when we got back to the cars around 11:00. Never felt cold, and a great view of Boston skyline.

Funny story about loading kayaks onto the car in winter… in our earliest days my husband and I were dedicated enough to go out for pool sessions with the sea kayaks when it was below zero. Loading the boats after was tricky because in the time it took to get them from the building and lifted to the roof they would have spots that had turned to ice. Plus our fingers were cold quickly no matter what we wore.

His Elaho slipped one of those frigid nights and hit his head, we didn’t think much of it because he was wearing a wool hat and it was too damned cold to stop and assess unless he showed indications of a serious problem. The parking lot was anything but well lit.

Bundled into the car, stopped at the first convenience store on the way home for hot coffee. He went in. It was not until he got under the lights of the store front that I saw what he looked like. He realized it inside when he saw the look on the clerk’s face.

The hit had been hard enough to cause bleeding, and like most head whacks the bleeding had been enthusiastic. He had a rivulets of frozen blood running down the side of his face from under the hat and down the front of his jacket. Looked like he had been the loser in a bar fight.

Should note we had figured I should drive…

The rest of my winter kayaking has been more normal, usual getting stuff out of the ice on the deck coming in.