Has some nice conditions for the first weekend of spring - bright sunshine, above 50 degrees air and a brisk 39 degree water temp. More important, we had some long period (11 second) swells rolling in, albeit on the small side (thigh highs), with a light offshore wind. In other words, perfect for some longboat surfing. Pretty mellow fun, with a handful of long board and SUPers out in the break. Had a chance to play with a deck mounted GoPro (with voice commands) and a new Gearlab carbon GP that I decided to splurge on. The GoPro worked so-so. 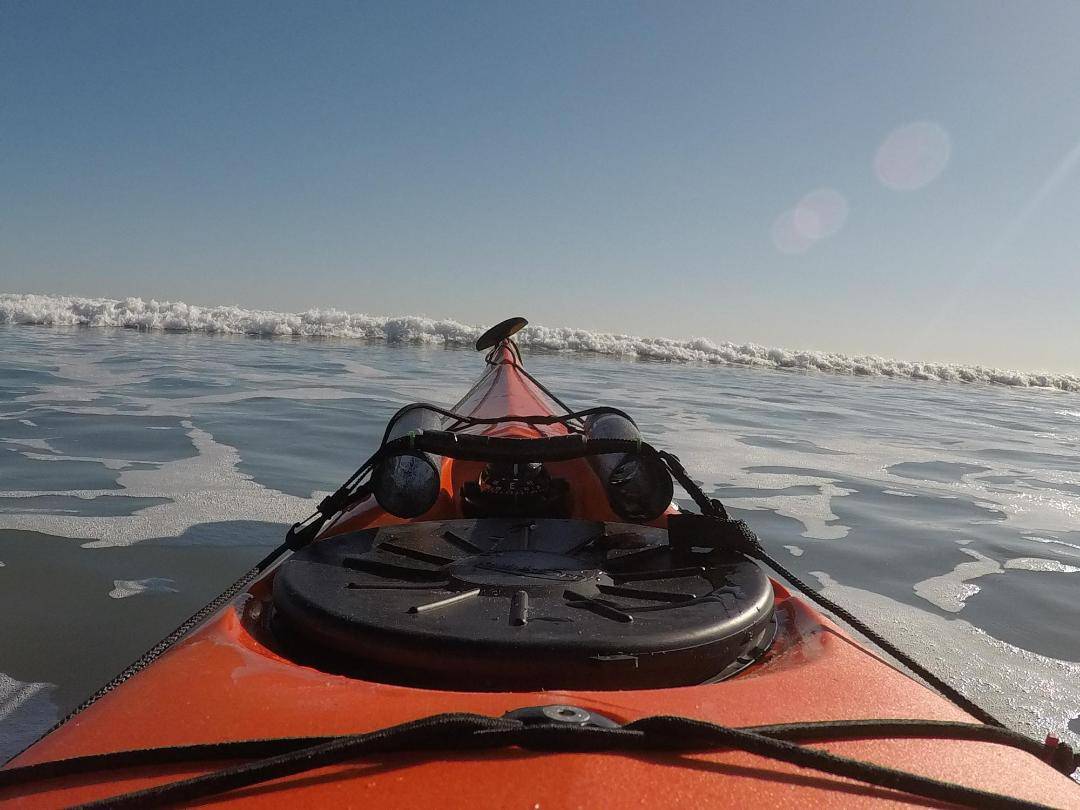 Oncoming wave (can you see it?! LOL): 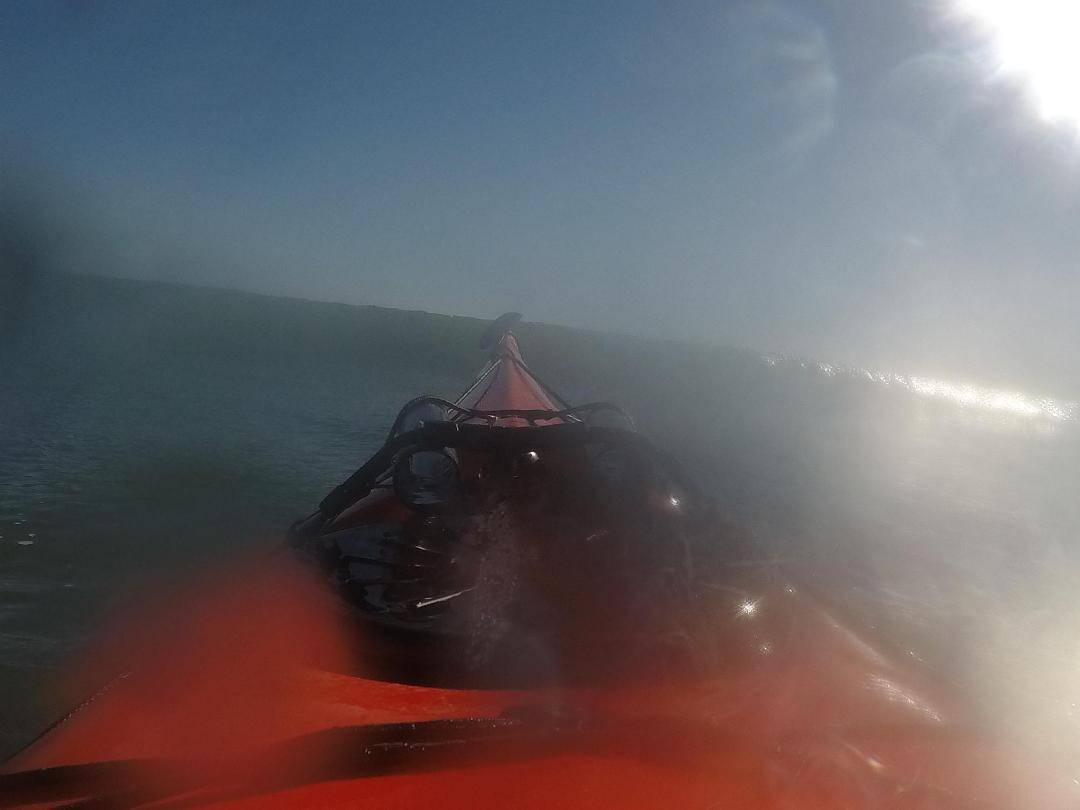 Boardies farther down the break: 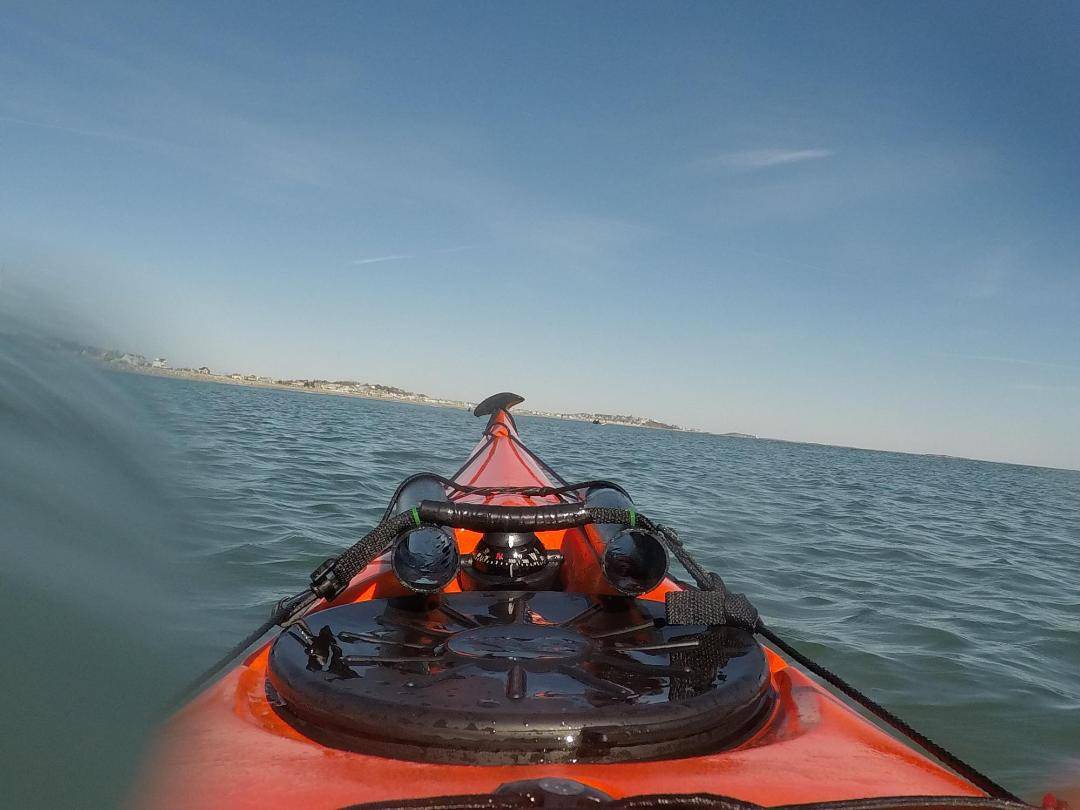 I like the Gearlab GP more than I expected. I was just too lazy to carve another GP and decided to spend money rather time for another GP. The Gearlab is flatter from the loom down to the paddle blade tip compared to my WC carved GP. My carved GP has more of thickness in the blade from the loom that then tapers down to a more flat shape within a foot of the blade tip. The difference is that I can feel the Gearlap GP grabbing and loading at the beginning of the stroke, much like a Euro, rather than my carved GP which tends to really load more towards the middle of the stroke. The Gearlab GP seems to allow for quicker acceleration which I much prefer for surfing.

May be more longboat surfing conditions next weekend. That would be fun.

Did you get one of the surf-specific wider Gearlab paddles or a more traditional profile? Sounds like a great day.

@AlwaysWet said:
Did you get one of the surf-specific wider Gearlab paddles or a more traditional profile? Sounds like a great day.

No. I tried using my waveski paddle (170 cm) in the Delphin and found that it did not have enough length to leverage a good stern rudder in the longboat (PH Delphin). I tried with my carved GP (about 210 cm) with the Delphin and liked it better. So, I bought the GearLab 210 Akiak (shoulderless loom) model – in bright orange!!! (I want to be able to find it more easily if I should drop it in the surf zone.)

Awesome. I’m in a similar setup, Delphin and learning to surf w euro, but also have a 220cm GP.

@AlwaysWet said:
Awesome. I’m in a similar setup, Delphin and learning to surf w euro, but also have a 220cm GP.

Cool. My third time out with the Delphin. Still learning its carving/turning capabilities but really digging it. Makes me not so whiny when waves are just too small for any good action with a waveski. The Delphin catches waves way earlier in front of a wave and helps to lengthen what would be a very short ride for a waveski.

Some guy watching my surf session came up after I pulled out of the water. He was impressed with how well the Delphin surfed and how his kayak can’t turned like that. I asked what kayak model – a WS Sealution. That’s akin to comparing a SUV to a sportster. Got to ride the right horse for the course.

We’ve had storm after storm after storm here making it sketchy to get out in the polluted run off and huge waves. My little inner ear problem actually became a very big problem but seems to be going away. I’ve got out a few times on the wave ski in recent weeks in small surf, and this morning I was able to balance my tippiest surf SUP and paddle around in choppy water. So I am feeling pretty happy. Have not surfed much since first week of December and I am in sad physical shape. Paddling apparently is much better exercise than I thought.

@SeaDart said:
Have not surfed much since first week of December and I am in sad physical shape. Paddling apparently is much better exercise than I thought.

Hope you feel better and get out more. Evidently (according to my Fitbit), surfing can be a pretty decent (interval) workout, depending on the size of waves. I burn about 400 calories doing 10 (3 minute) rounds on the heavy bag, with 30 second rest periods. For this recent surf session of 2.5 hours, I burned about a1000 calories sprinting for waves and paddling out through the break zone (granted the latter was pretty easy with waves well under 4’). Catching and riding waves are way more fun, whereas the heavy bag is just a workout (that keeps me in shape for other more fun activities).

Conditions were very similar to the first, except the thigh-high waves were from wind swells in the 9-10 second range and much mushier because of the slight onshore breeze. 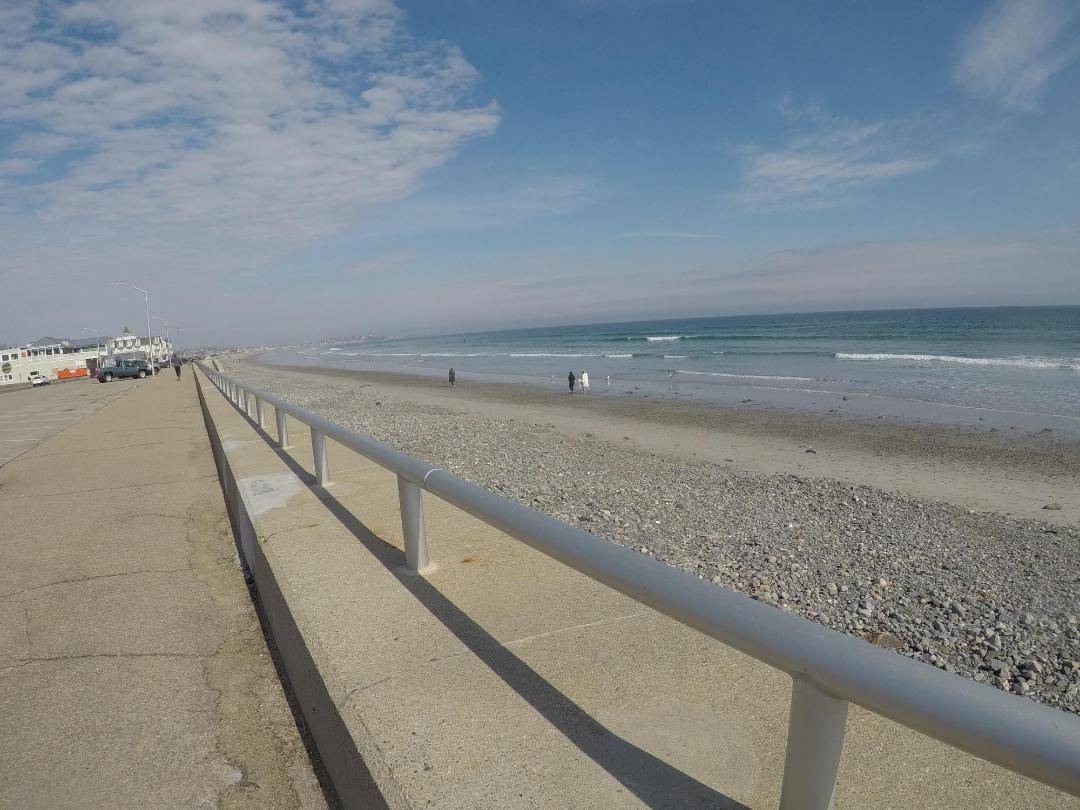 Just a chance to play more with the voice command GoPro. Not really loving it. Issue with picture clarity since, in the surf zone, water constantly is running down the lens. 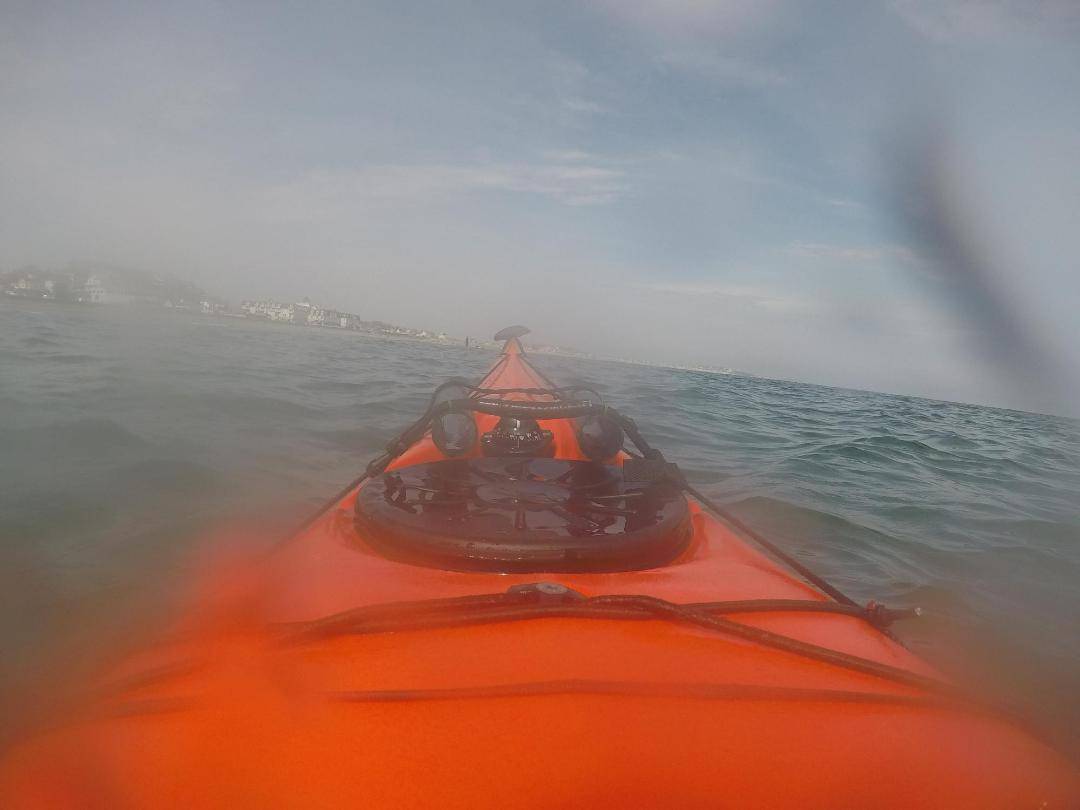 I also couldn’t really tell whether my voice commands were registering over the ambient noise on the water. A lot of times, the camera did not respond to my verbal commands and I really couldn’t tell since I didnt have my glasses to see what the small digital screen was saying. The GoPro did capture one video of me going for a wave. Quality actually came out well because with the back of the camera facing the oncoming waves, there was less water collecting on the lens to mess the picture up.

Looks like rains are headed our way for later Friday and all of Saturday. But the spring rain means spring surf for Sunday. Looks look short period waist-highs… Lousy for waveskis but fun play for the long boat.

I’ll be down at 'Tasket again sometime in the morning, before the astronomical high tide smashes into seawall by early afternoon.

Man I’d love to get out Sunday but have familiar obligations all weekend. Watching two nieces all weekend, as well as our boy, the wife would kill me if I stepped out and left her alone with three kids.

Maybe I’ll drag my ass out Monday. I’ve been hitting the gym at least twice a week, would be fun to get an interesting “workout” in.

Was an okay session. Thigh to waist-highs that were a combination of underlying easterly 10-11 swell, overlaid with short period 5-6 second wind waves from the same direction. So, some waves were a little bit zippy while others were a bit mushier. Still some mellow fun on a warm but foggy/misty morning. 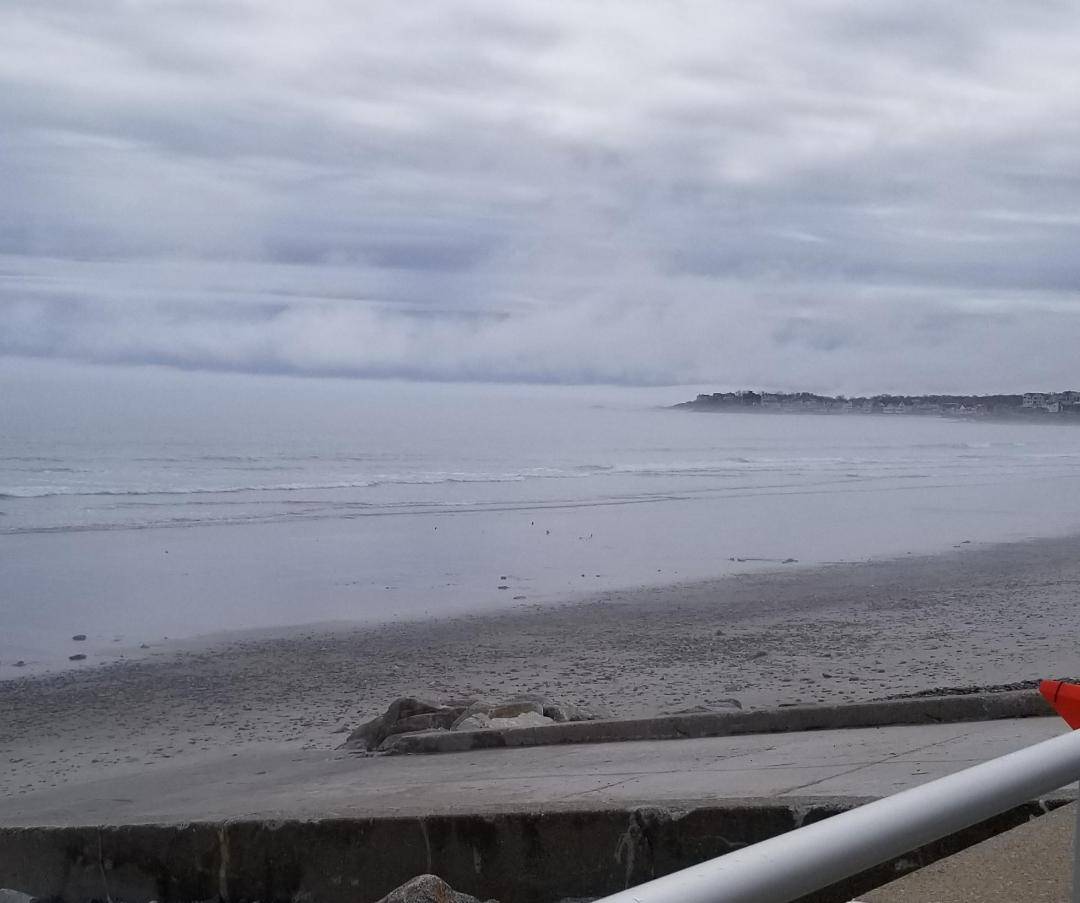 Definitely a good day for a longboat. Only other folks in the zone were a couple of SUPers hidden somewhere off in the fog. 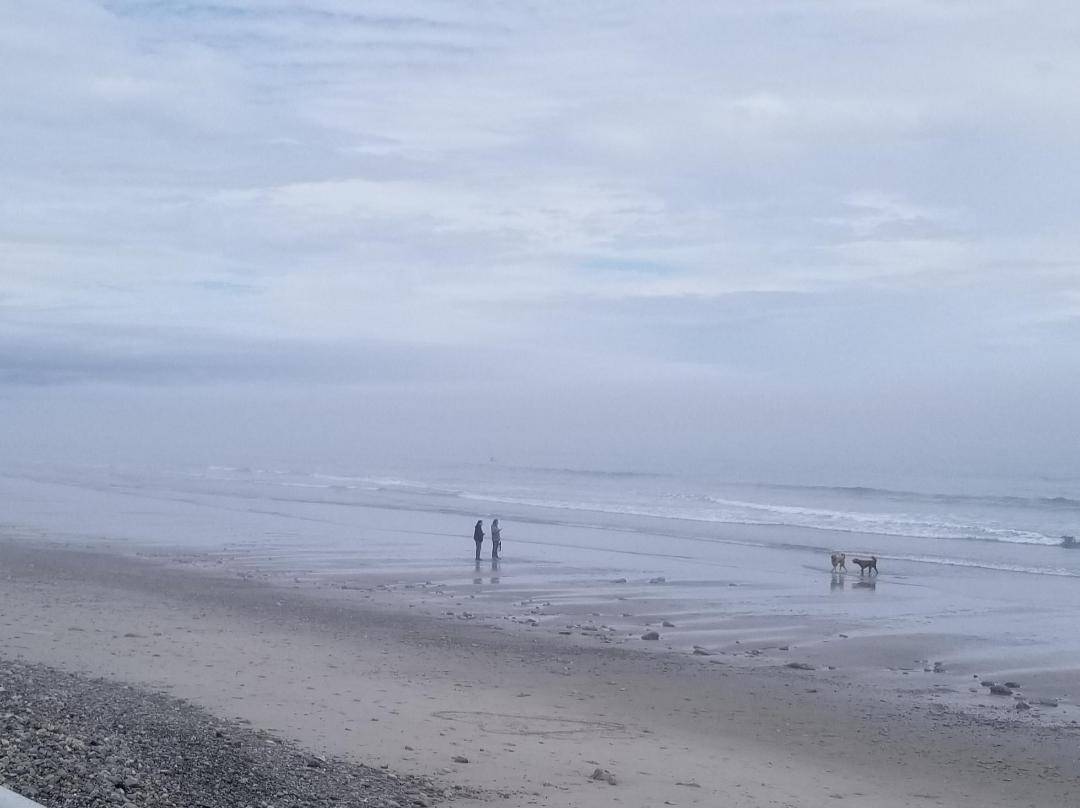 While getting some rolling practice in, noticed that the water no longer had that “bite” on my face. Balmy surfing season will be upon us soon enough.

Another spring rainstorm for New England this Friday into early Saturday. It’s been a pretty wet April so far. Fine for the grass and spring blossoms.

Also, looks like another longboat surf session for this Saturday and/or Sunday!

I like the video I get attached to my helmet. But mounted on boat is fun to watch too. I have two cameras and will mount one on boat too for this season. I use the cheapy knock off china cameras from amazon. Not as good as gopro but if I lose one no biggy.