With Father’s Day coming, I knew it would be tough to get out this weekend, so I decided to join the local AMC group on their Thursday night run at Tville in CT. Tville is a run that I do often. It has some nice surf spots above the Gorge, and a couple of pool drops in the Gorge. The highlight of the trip for most is the playhole.

Being the only canoe (without a roll) with a bunch of kayakers (with rolls), I usually skip the playhole and focus on taking pictures. I had tried it once before at about the same level, bounced around for a few seconds before backing out with the boat still upright, and considered myself lucky. It didn’t look too bad on Thursday, so I decided to give it a try again.

I ventured in and the boat immediately got swung around sideways. I side surfed for a couple of seconds before doing a couple of forward strokes to get myself out. I was almost out when the boat hit the stronger downstream current at the edge of the hole, shifted upstream, and over I went. 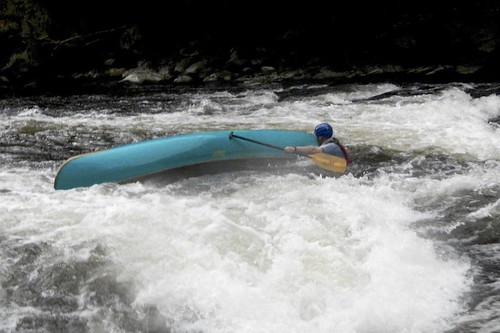 I gave the boat a good push thinking that would get it over to the eddy, but in the strong current it continued downstream – and me with it. I decided that I had better focus on getting myself to shore, which I did. My boat went over the next drop before the crew as able to push it into an eddy.

Even with the swim, it was another fun trip, and I remain captain of the swim team for 2017!

“I had it made–Why did I ever let those kayakers con me in to messing about with that playhole?” https://www.youtube.com/watch?v=UPw-3e_pzqU
(Well, Captain. At least you waited this year until June when things warmed-up a bit(which is more than can be said for my own involuntary first swim of 2017.

There’s a vortex in which the little yaks squirt,
and twist and flip roll play,
with bipolar tale they flail and flail,
wave-to-wave they glide away,

but for big gnu this just won’t do,
whilst in their one-legged doggy paddle,
with a sideways buck they often like to chuck,
into the trough riders from the saddle.

@canoeswithduckheads said:
with a sideways buck they often like to chuck,
into the trough riders from the saddle.

So true - at least if you paddle like me.