First Swim of the Year

Oy, those arches are enough to scare me. From that view are they water exit? if so, where is the entrance?

The arches are the exit. The entrance is that big opening in the foundation in the front, and there is a strong current flowing in. Apparently, there are some big holes in back that used to be part of the water works for the mill. They are filled with debris, but the water flows out there. If you get pulled into the foundation it will be tough to paddle back out due to the current, and you could end up getting sucked down into the holes – hence the Room of Doom.

I’ve only run the river twice, both times in a shredder, and both times we stayed on river left way from the hazard.

Hadn’t heard that story - yikes. That is why I am still a class II/easy III boater. I just have no desire to step it up. I love the challenge of moving water, but I don’t have to go in class IV rapids to find it.

I was thinking that they should be the exit but didn’t know. I think that I can see some sign of current along the wall heading behind the big foundation. I suspect that I wouldn’t want to slide backwards out of the eddy that the red kayak is staged in.

With my skill set I’d rather not take the line that the green canoe (tandem Blackfly?) is lining up for.

edit: I like the line that the green MRC is taking in the next picture better.

With my skill set I’d rather not take the line that the green canoe (tandem Blackfly?) is lining up for.

I found the video from the guy in the green canoe from that day. 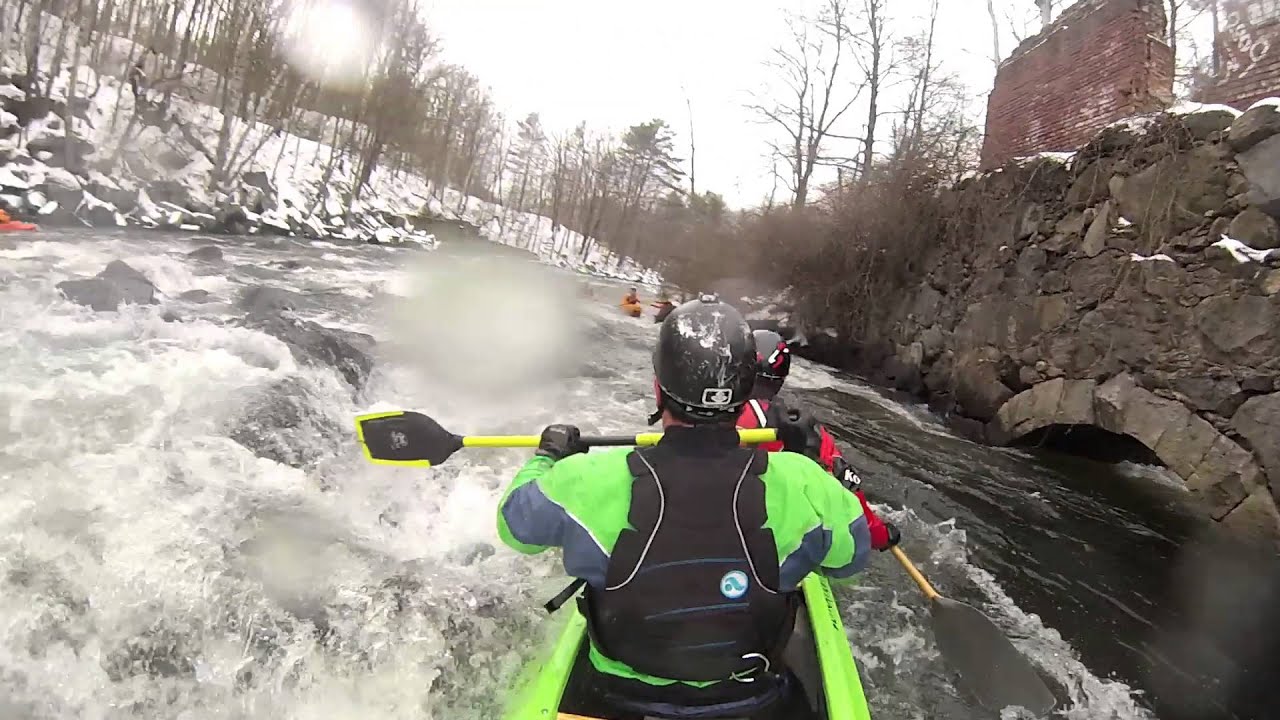 You can get a quick view of the Room of Doom at 1:05. Looks like there is a drop at the front of the foundation, and the water goes out the arches at the end. There is a better description on the AW page - the rapid is Coliseum. We went sideways down the drop at 1:47 (first railroad bridge - Railroad) and flipped the shredder. Fortunately there is a nice big eddy below it. The rapid at the second railroad bridge at the end (2:10) is Zippy’s - you can see folks who come down on New Years Day to watch.

The features are being built on the downstream side of the Rt. 3 bridge, the one with all the spectators at the end of the video below. One of them is complete, but I’m told more will be constructed.

That’s great! Love the idea of a whitewater park, akin to the skating board park near my house. It’s a great amenity and way to occupy youngsters and get them into a sport.

When I am up in western ME and need a break from fishing, I usually grab my white water boat from the shed and drive 20 miles over the notch to Errol. Sometimes I’ll just do a couple of runs and portages of along the short run between Errol Dam and Bragg Bay. Sometimes, I just spend an hour or two playing the eddy lines right at Bragg Bay, trying for stoopid kayak tricks, or just practice ferrying back and forth, bracing, rolling, etc. It’s “cool” fun in the heat of July and August to have a convenient play spot. 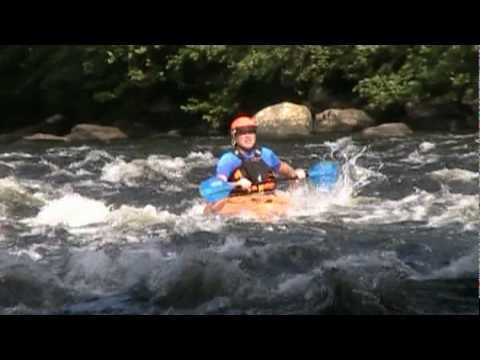 I hear you, Sing. “Letting go” is easier said than done. Near death experiences cast a long shadow forward in time. I almost got sucked under a bridge on my first kayaking trip in the mid 1970’s - back when I didn’t know squat about moving water hazards. I survived by grabbing a bridge railing while the kayak was ripped off my body and sucked under. Kayak got pinned under there for about 10 minutes. I did a lot of canoeing after that but it was about 10 years before I got into another kayak. 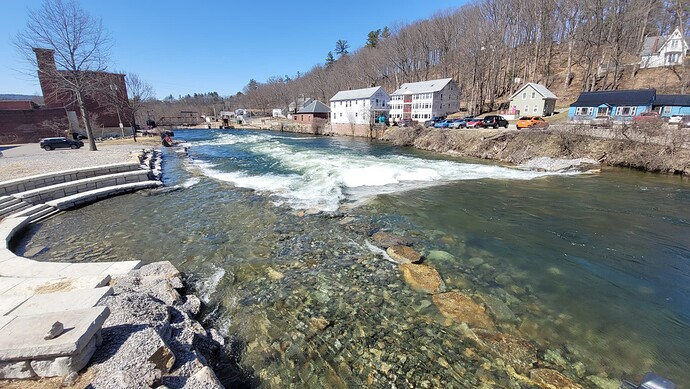 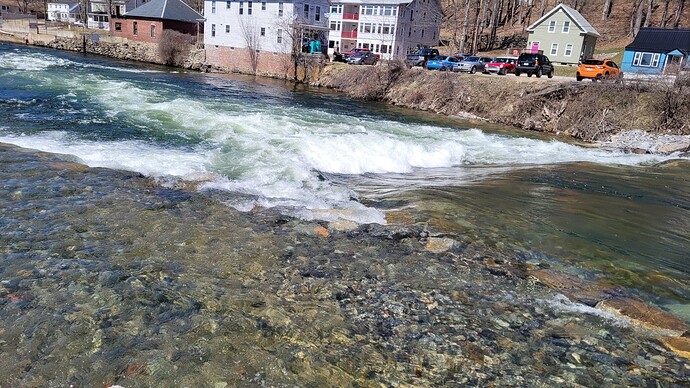 This is just above the dam in Franklin on the Winnipesaukee river, built by Outdoors New England just down the street. Looks like fun.

@eckilson I was in Franklin today and decided to take a walk up the riverwalk. Got some good views of the Room of Doom while I was there. That whole river looks like a lot of fun! 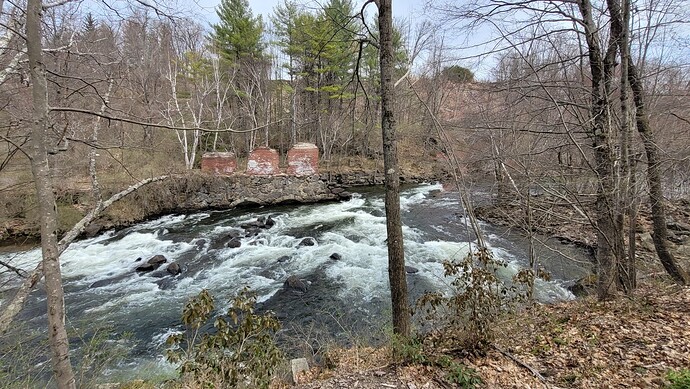 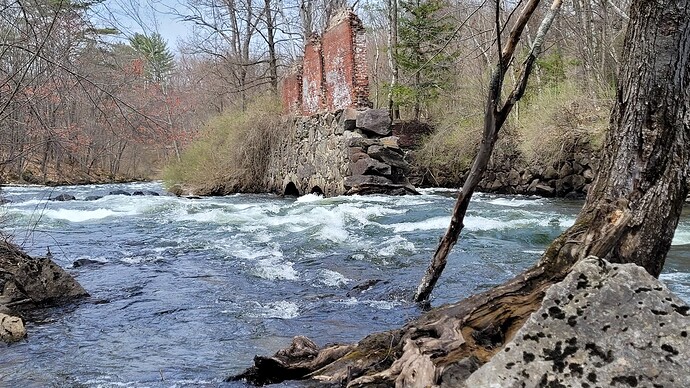 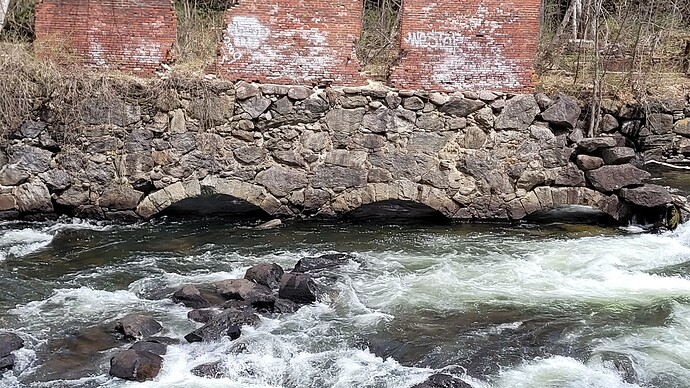 That’s it - the easy line is to eddy out on the left, and then go down the left side - you can see it in the first picture.

The arches look clear from those pictures, but there must be stuff underwater.

I think our step-up paddle next weekend will be on this section of the Winni. It you happen to be there next Saturday (late morning/early afternoon) and see a purple canoe with a bunch of kayaks, that will be me.

The hole farthest to the left has a big log going across just below the surface. I couldn’t tell if there was anything at the others, but I would say it’s a safe assumption.

Thanks - I think I saw somewhere that there is wood in big drop above Trestle View Park as well. 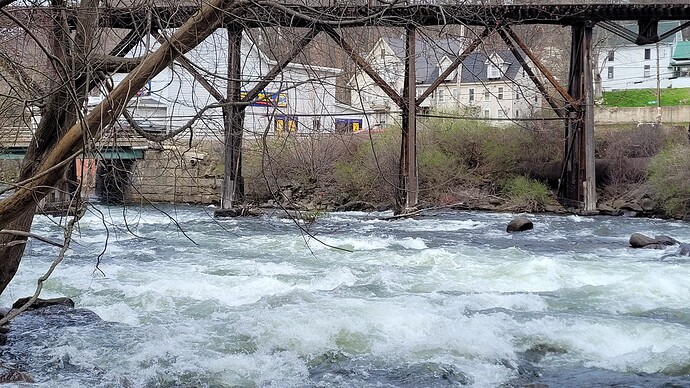 It’s blocking the second to right space between the supports. Best path looks to be staying to the left. You could go to the far right, but there’s a large log in the middle of the right channel just above this. If you zoom in, you can see it behind the upstream rock in this picture. 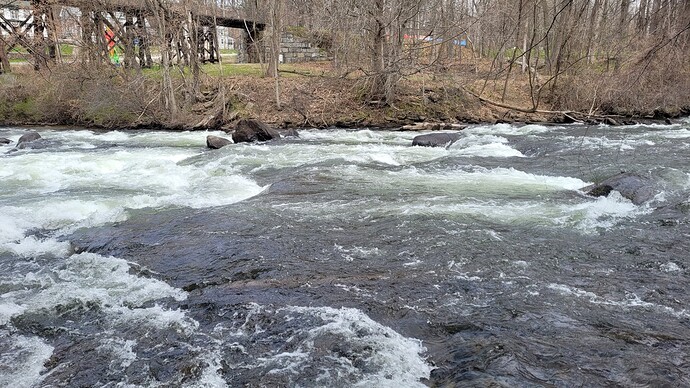 Thanks for the pictures - if we run this section I suspect we will take out above Zippy (the rapid under the trestle bridge), which would be a shame since that is where everyone is watching.

The two openings on the left half of the tressel are clear of obstruction, but I don’t know how difficult it would be to stay left on this section.

Most people try to hit the 2nd trestle from the left. When I did it in the shredder a few years ago we went through the 3rd trestle on the first run and the second trestle on the second run. There might be something in the water on the left side too, because people have been getting out above the trestle rapid. Hopefully I’ll know in a few days.

I did the Lower Winni on Saturday - there is a huge log blocking the usual routes through the 2nd and 3rd trestles from the left, so we took out above Zippy’s at the end. It was a low level run, and the rapids weren’t particularly hard, but there were very unforgiving - a swim would be nasty and a swapped open boat would get pinned for sure. I made it down one run without trouble, considered myself luck and called it a day

I didn’t go in, but there is some video of kayaks in the new wave at Trestle View Park the end of the pictures here:

A roll seems to be the best way off this wave, and I don’t have a roll…

Looks like a lot of fun! Every time I’m up in that area I spend time watching people play on the wave. Someday I’ll be able to do more than just watch. I spent yesterday at a lake in Deerfield practicing rolling. I still have a ways to go.