First Swim of the Year

I headed up to NH yesterday to run an old favorite – the Piscataquog in Goffstown. Its an easy river with a ledge toward the end of the run with a fun surf wave. Kayakers love it, but in an open boat it tends to turn you sideways. After a few seconds of side surfing, I usually get window-shaded, which is what I did yesterday for my first swim of the year. No pictures of my swim, but here is one of my prior attempts. 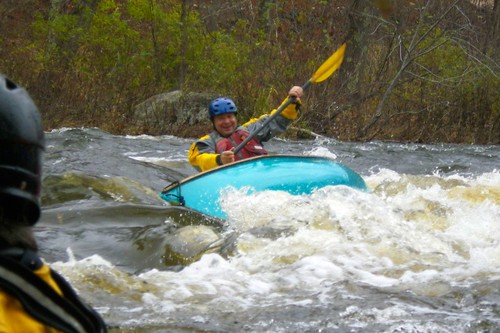 Was it a scheduled release, or just ongoing flow because of spring melt?

That is nerve wracking. Like anything, wet exit is important to practice, but something like that you just never know…

Was it a scheduled release, or just ongoing flow because of spring melt?

Just the normal release from the dam - was 500 cfs when I left the house, but dropped to 300 cfs in the afternoon. The usual release level is 1000 cfs. it was boney in spots, but we still found places to play.

If I remember correctly, “bony” would make that ledge/surf wave a bit more interesting tho’.

Same result for me - done it without swimming in a tandem boat, but in the solo I always get sucked in and swim.

Surprised you two didn’t go over. Seemed like a lot of water coming over the bow when right at the ledge.

I grew up only a couple miles from there. I swam in Glen Lake above that dam, I jumped off the trestle on the Manchester line, but I never did explore that part of the river.

There’s a whitewater park being built in Franklin on the Winnipesaukee river. They’re planning on having a standing wave feature built into it too.

Interesting… Is this after the class III plus run, or integrated towards the end of the run?

There is also an easy class II farther up in Tilton, right after the dam.

From what the guy at New England Outdoors in Franklin said, I it’s towards the end of the run.

I haven’t been up there to see it, but it is at the end of the class III section at Trestle View Park.

I’ve done the Upper Winni many times. Its an easy run that ices-out early, so it is often one of the first trips of the year. The Lower Winni is a different animal, at least for me – continuous class III (+). It’s popular as a New Year’s Day Icicle Run. I went up one year and ran it in a shredder. It was a blast, but even in that boat we managed to go sideways into a big hole and tip over. This was me (blue helmet, red PFD) going through Zippy’s at the end. 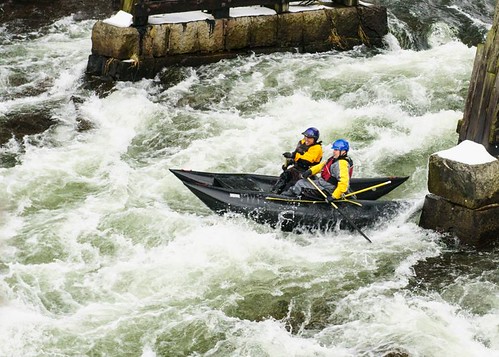 I’d like to try it in my canoe sometime, but it would have to be with the right group at a much lower level - probably never happen.

I’d like to try it in my canoe sometime, but it would have to be with the right group at a much lower level - probably never happen.

I never tried the Lower Winnie. The whole “Room of Doom” thing really freaks me out. I think this is the embedded memory/trauma of getting caught upside down in a strainer in the east Pemi (Lincoln). I got my paddle stripped and then was sucked right out of the boat with the force of the current. Miraculously, the strainer let me go right through its branches. But, I don’t think I have yet to “let go” of that strainer…

I never tried the Lower Winnie. The whole “Room of Doom” thing really freaks me out.

For those who might be curious about the reference, you can see the “Room of Doom” in the back of this picture - the remnants of an old mill. In high water a strong current runs into that mill and out through the arches. If you get sucked in there is no way out. Water flows out though the arches, but a person will get stuck in the debris. 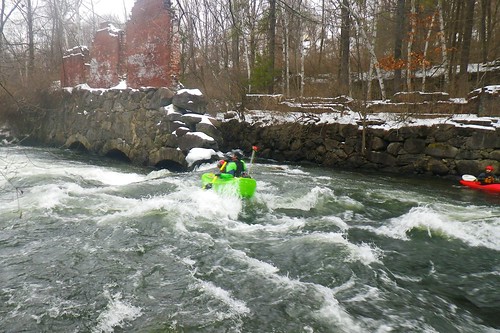 There is an easy line to the left, and a more difficult line in the center where the green canoe is going. Great example of knowing where you are so you know where not to go.

It is a challenging river - no doubt about it.

Miraculously, the strainer let me go right through its branches. But, I don’t think I have yet to “let go” of that strainer…

Those moments are definitely a wake-up call. That is why I am still a wimpy WW paddler.

Oy, those arches are enough to scare me. From that view are they water exit? if so, where is the entrance?

Those moments are definitely a wake-up call. That is why I am still a wimpy WW paddler.

Some folks know this story. I went up to NH to meet up with some MVP WW folks (I knew one or two in the group) to do supposedly a class II/III, which I clearly stated was what I assessed myself comfortable with. Thought it would be Piscat or upper Winnie. Got there, others in the group said, “Oh East Branch (of Pemi) is flowing. Let’s do that.” East Branch flowing was/is a class III/IV. I should have turned around and gone home. That was the one BIG mistake.

We launched from the Wilderness trail, beyond Lincoln. Very fast water dropping and gushing through slots in between huge boulders. I got through the first hundred yards fine. Went through slotted drop and capsized. I rolled up and saw current headed towards some boulders and a strainer on river right. No problem I thought. I hit a barely submerged boulder and capsized again. I was still calm and thought I would roll up and then paddle/ferry towards river center. The water was flowing much faster than I appreciated. Before I was able to roll, the boat hit something solid – a major branch – on the strainer and stopped dead. In those brief seconds of realizing that I hit the strainer, the force of the water current tore the paddle out of my hands. Then I had that calm thought, “Oh, this is where I will die.” Right after that thought, I got pulled right out of the boat and through at least 2-3 branches and out the other side of the strainer.

I was sanguine at the time it was happening. But, now, I definitely have a bit of fear that has taken hold. I still go and play at the Androscoggin class II when I up in western ME. I still like to surf on waves. But, notion of dropping into those pushy, slotted class III/IV’s, e.g. the “Dryway”, Lower Winnie, etc… Nope, I don’t pay attention to those “siren calls” anymore.