I don’t have much experience with floating line. In terms of packing away, coiling and knot holding, how does NFPA line (e.g.,

Are there other options? I gather the twisted plastic-y usually-yellow stuff is by far the most economical but it seems fairly stiff for lack of a better word.

You can get decent, inexpensive, braided poly line at big box stores. They perform well enough for painters or dock work, but they might not last too long. I’ve used it. Used it for boat tie downs, too. But, it wears out.

I made a rescue throw bag using the braided poly rope that has the red and white barber pole pattern. I used 75’ of 5/8 line, which is kind of big for a throw bag. In practice, it worked well. The bigger bag was easier to throw and the person on the catching end appreciate the 5/8 line to grip. Cheap rope, but the rescuee never complained and because it spent most of its life in a bag, the rope didn’t wear out much. It disappeared on an ancient shuttle run, so can’t report further on that. Most bags use narrower and stronger lines.

Annapolis Performance Sailing sold me some floating line I like a lot. I think it is called Marstron It is a very supple line that easily takes and holds knots. Ug, when I just looked that up I read that Marstron degrades with UV exposure. That will be worth monitoring as these ropes go into their second year.

I bought some floating line from my local big box store to make my own tow kit but it is “springy” doesn’t hold a knot well and is hard to stow.

I ended up biting the bullet and buying a Seals tow belt after finding a 20% off deal. The total cost was $52 and is a much better kit than I had put together myself. 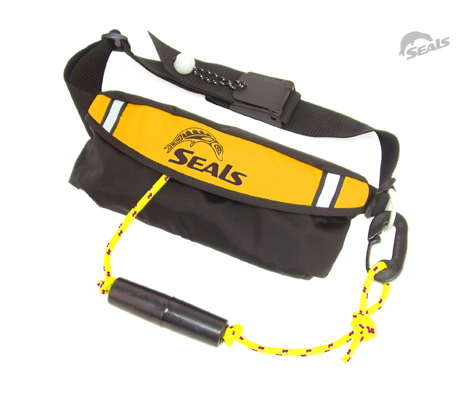