I am a novice kayaker with little, but some experience kayaking and am super interested in buying my own and hitting the waterways every chance I get. I must admit, I am a little terrified of the wildlife in Florida; a mini Australia really, everything can kill ya!

For a reason, unknown to me, I am less frightened to paddle next to alligators, or the occasional shark, but a run in with an aggressive cottonmouth is driving my dreams into nightmares. I would hate to have one fall from a tree into my lap… I think I’d have a heart attack. I’m interested in hearing about any encounters and maybe some safety protocols. For some context, I’m not a fisherman and will not be fishing out of the kayak.

With having this thought in the back of my mind, my logic is leaning me towards a sit on kayak. Not only for better reentry to the kayak in the event of an overturn, but to be able to exit quickly, or move my legs and not have a creepy crawler get stuck in the dugout.

Ultimately, this fear isn’t going to stop me from paddling - if anything, I’ll keep to the sea and stay out of the swamps and springs to avoid encounters, but I really don’t want to - I want to explore all of Florida!

Let me hear your thoughts. Thanks!

I’m with you. When in Florida or anywhere in the South paddling, I am much more concerned about cottonmouths than gators or sharks. My rule of thumb is to not paddle under trees/limbs if at all possible. I save the really tree covered paddles for the few sub 50F days in winter so that any serpents are lethargic if not hiding in a hole.

As far as SOT versus sit in, the last thing I want is a SOT where the snake has lots of room to hang around on deck. And, should you jump overboard, then you are nearer the serpents buddies and a cottonmouth is still in your kayak. Learn to wear a spray skirt and then use your paddle to flick a snake off the deck should it make it up on deck of a sit in. It has never happened to me, though it has to a couple friends. They were thankful to be wearing a spray skirt.

My only near experience with this type scenario was 20 years ago when a beautiful cottonmouth dropped out of a tree about 15 feet from me slightly to the right of the direction I was paddling near Silver Springs FL. The serpent stuck his head up and looked directly at my kayak and immediately started swimming to the first “log” it saw (my kayak) so it would be on something dry. Three quick paddle strokes and my heart was in overdrive but I was several feet beyond the snake. A couple more strokes and I was well away from the slithery threat. My friends who saw this happen were laughing as I regained a regular heart beat.

What part of Florida? I’m just north of the state line and work in Jacksonville. I’d guess we’re similar in ability right now and I’d be interested in what lakes and rivers you find.

I have’t seen a cottonmouth but the top of the food chain is now the python. 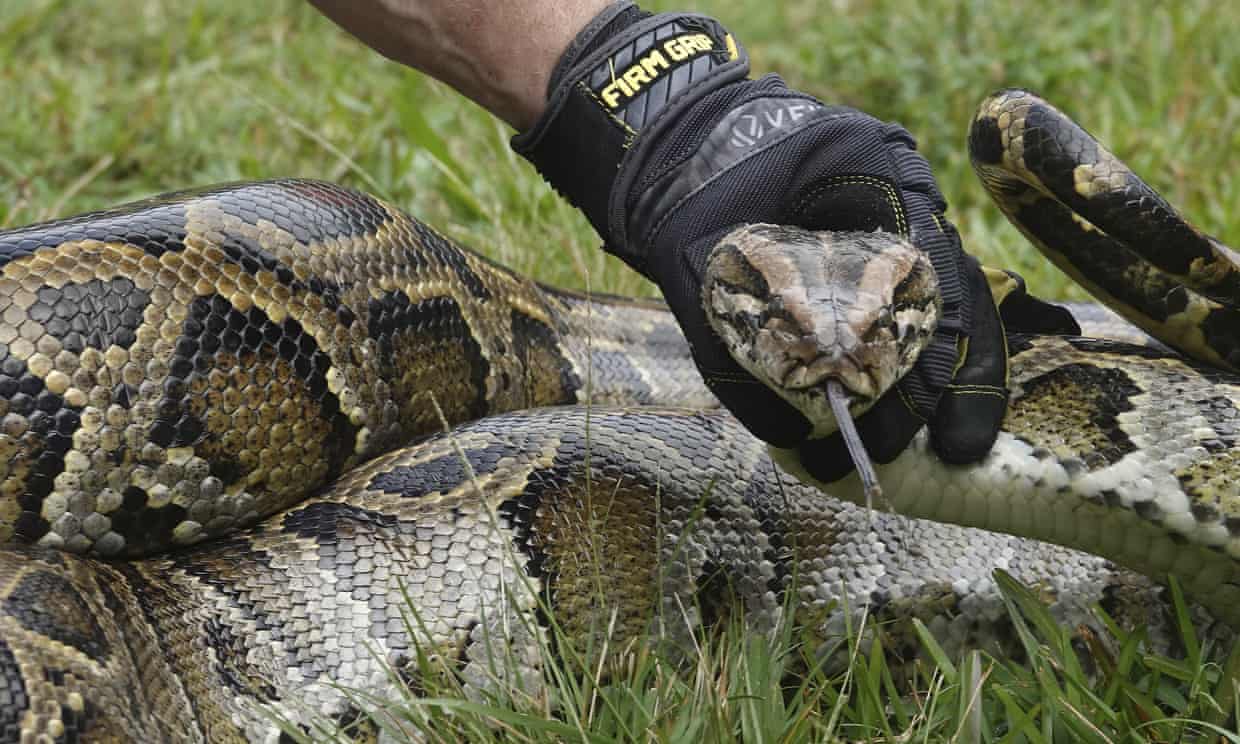 I’m grew up in Central Florida - my town is very beachy and most of my trips have been sea paddling! I did grow up taking a few trips to Three Sisters, but most of the time I paddled at Silver Springs and, of course, Weeki Wachee Springs.

I’m relocating to Northern Florida… an entire hour from the beach! So I will be finding more spots up your way soon.

You haven’t seen a cottonmouth, but you’ve run into a python?! I’d consider yourself one lucky person. I spent time volunteering in the Everglades when I lived in SoFlo and I never did come across one. Although, by now, anywhere you go in the glades, its safe to say that there is at least one in your voice range distance.

Though to be honest, pythons scare me less than an aggressive cottonmouth. No doubt they both pack a punch, but one of those is spiked with venom. I’ll get over it one of these days.

I have lived near and played in southern swamps since early childhood. I’ve killed a couple of cottnmouths but the truth is none were acting aggressive at all. Snakes just want to get out of your way.
Red wasps and hornets , who like to build nests in bushes along waterways, are a bigger threat IMO.
The only critter that ever fell in my boat was a fishing spider the size of a small saucer. That bothered me.
I paddle SOT and look if I’m very near bushes but don’t worry about snakes . Most are brown water snakes , not cottonmouths. Remember 2 things: those fangs are for catching dinner and they know you aren’t it. And, a snake will do everything it can to get away from you. A SOT gives them more opportunity to escape than a canoe or SINK.
They only bite if injured or cornered.
Finally, my parents grew up in central Florida among and in the swamps and rivers during the 1920s and 30s. Neither they nor their 8 siblings were ever bitten.

I live in the North but over the last 15 years have put in about 300 days paddling in the South.
Lots of ten day Everglades trips. Never seen a python except one in the porta potty on a beach.
Never gave cottonmouths a thought though have seen them…leaving Gators… fascinating. I know enough not to spook em as they don’t have a thinking brain. Perhaps I am just not enough snake aware… I don’t really like remote mangrove tunnels as they have spiders in your face.

Now fire ants terrify me and the biggest paddle camping enemy I have is the sand flea. Those are horrid.

Learn to control your fear. You do that by learning everything you can about snakes and how to avoid them.

Now fire ants terrify me and the biggest paddle camping enemy I have is the sand flea.

You just have to keep you eyes open and pay attention. I have paddled all over Florida and never had a problem. I have never seen a moccasin be aggressive, and I have been inches away from them at times.

You almost only see them in the late spring, when they are feeling sexy, so just be careful.

Moving to North Florida will get you out of the monsoon season. A lot of their rain comes in the winter and the snakes are torpid at that time. That is when some of the most beautiful spots have water enough to float a boat.

Just east of Tallahassee is the town of Wascissa. It is also the headwaters of the Wascissa River. It is gorgeous there, springs abound and down about a 1/4 mile is a massive spring that can give you vertigo when floating over it.

Learn to control your fear. You do that by learning everything you can about snakes and how to avoid them.

You don’t need a kayak to get out in the woods. You need to do some nature study.

The op “Leavemewild” that has this fear of wildlife that neither you or I have.

OS, you should have seen my spider! We canoed through some brush and she fell in the boat. It had highly visible fangs and I was wearing sandals. It was the size of my hand.
There were several other paddlers along and when I worried out loud I was called Wimp and a couple of other less than flattering names.
My bow paddler didn’t mind spiders and was wearing gloves. She picked her up by a leg and it flipped on top of her hand. One heckler said " Holy Sh#$! I’d have been out of the boat!
My bow paddler jerked , the spider fell in the water and ran off across the surface.
I call the spider a she because she was holding an egg case in those fangs. Rationally, I knew she wouldn’t release it to bite me but it wasn’t a rational moment.
It was on the Edisto.
Look up fishing or dock spider. Interesting, at a distance.

Hey String apparently Ontario paddlers are beset with dock spiders too! Your friend!

10 Facts On Your Friend, The Dock Spider - FACES Magazine

Welcome to p.com, a great source of information and potential friendships. Over the years, I have paddled with many folks from all over the country that I first met on p.com (originally p.net)

I’ve paddled an average of several times a week in Florida for decades and I’m also a docent at a zoo and a volunteer in a nature center at a state park, handling snakes and other reptiles and helping educate the public about these animals.

I see snakes just about every time I paddle, because I love them and I’m looking for them, and photographing snakes is one of my hobbies. I’ve never seen an aggressive cottonmouth, and the only snake that ever landed in my canoe was a Peninsula Ribbon Snake that I accidentally shook down from a limb while trying to retrieve a shirt someone had tied in an overhanging tree branch.

The more you learn about these animals, the more comfortable you’ll be. If you’re on Facebook, please visit and join the group Wild Snakes: Education and Discussion. Check out their “units” where you can read about different categories of snakes. Their moderators are about the best I have seen on Facebook, and a lot of extremely knowledgeable people post.

The best book I have found is Snakes of the Eastern United States, by Whit Gibbons.

I agree that fire ants are much more likely to mess up your day. Personally a sit in with a skirt would make me feel less vulnerable… if snake attack was my booger man.

Not paralyzing, irrational fears. No nightmares. Just my concerns.

I actually went to forestry school with a guy from Mississippi that was canoeing in his home state and had a water moccasin fall out of a tree into his canoe. He was bitten on the leg. He was still upset by it. Avoiding over handing trees is a good idea, but you can’t avoid all of them.