Another good video from the National Center for Cold Water Safety: 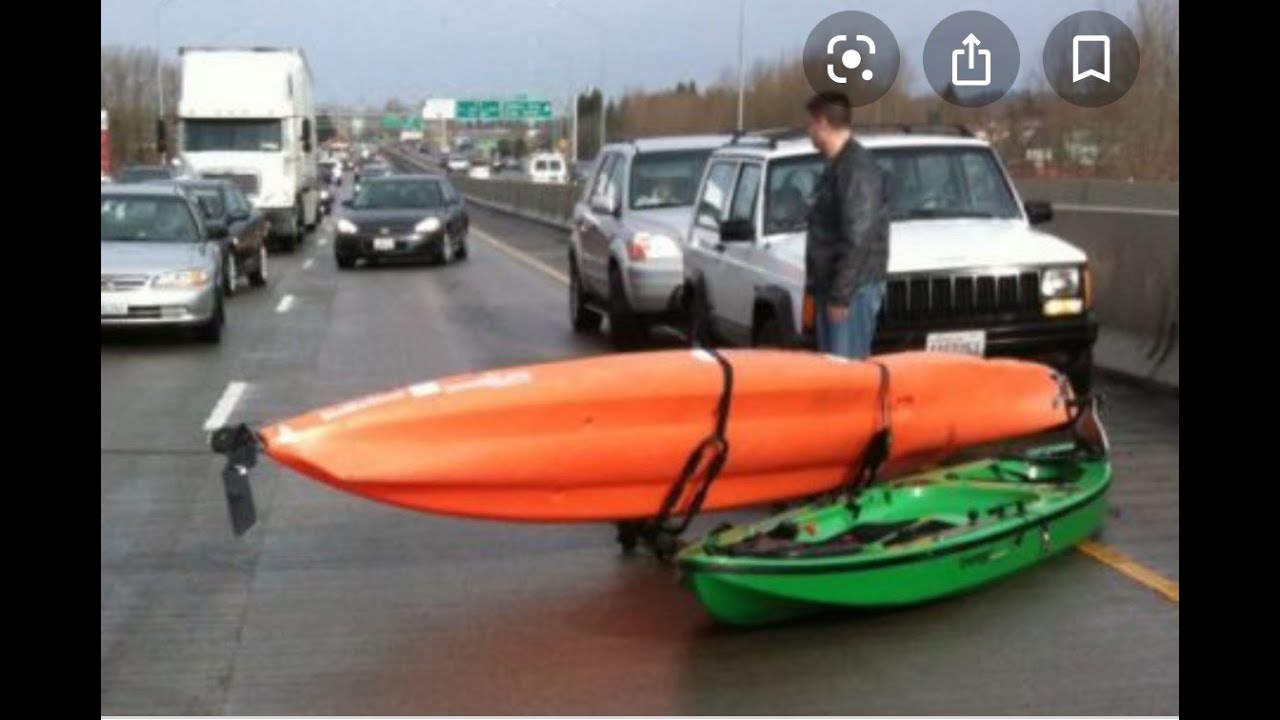 Thanks! That is a good video. I always make it a priority to get out from behind any vehicle carrying kayaks, canoes or other stuff because you just don’t know how well they have the things secured.

I have a friend who used to say, “There is a right way and a wrong way to launch a boat.” The wrong way is as you would launch a sailplane. This offers some pretty darned good demonstrations of the wrong way.

Hmm. Bow and stern lines came undone, I guess. Devil’s in the details.

Not funny and not acceptable.
For God’s sake tie down your equipment. Use lines on the bow and stern even for short trips.

For canoes I like rope with a trucker’s knot.

Total newbie here and 1st post. Just got my first kayak (13’) for Christmas and haven’t even been on the water with it yet because… well, it’s frozen. Besides, I still need a rack to get the boat to the water, and I really don’t want anything like on the opening video to happen.

Three interesting points from @paddlinpals a few messages back.

By factory racks, do you mean the rails that come factory installed on many SUVs, or the cross racks? I’m looking to get a new vihicle soon and getting those rails may be unavoidable with certain models. I’ll also be looking for some sort of attachment, e.g. J bars.

I see a lot of J bars. But the video seems to indicate that having the kayaks on their side makes them more prone to acting like a sail. Is having them flat recommended or prefable? Any advantage to have J bars if they’re not cheap ones?

The best factory rails are raised rails, which give a very strong mounting point, but they are getting more rare as manufacturers go for low profile rails

The bottom line is that all factory racks should be considered guilty until proven innocent. A few things to consider.

A blanket distrust of a factory rack that was engineered by a major auto manufacturer seems silly to me, but to each their own.

I would bet that essentially 100% of failures are from user error, whether that be poor installation of accessories, overloading or both

@Otterway - I recommend that you go for a top quality brand like Thule whether your vehicle has raised rails or flush rails. Typically the crossbars on factory racks are rated for only around 130 pounds and while that may be perfectly adequate, bars from Thule can hold a lot more so you have a much bigger safety margin. On my vehicle the factory crossbars are rated for 130 but the roof rails themselves are rated for 300 pounds when traveling so with a Thule rack and crossbars my set-up is rock solid. You’ve already got lots of other good advice like what Overstreet told you…to tie the boat to the rack and not just a J-bar or saddle.

Also, I learned the hard way this summer that you should check for a front and rear tie down spot BEFORE you load all of your camping equipment in the trunk and go to rent a kayak on the way out of town. . .

It turns out that for my SUV, you have to get the tow hook out of a package stored by the spare tire under the floor of the trunk. So yeah, I had to unload the entire trunk to get that out and be able to secure the front of the rental. (I do know that ties exist that secure under the hood, but I had assumed there’d be a spot under the front bumper like there was on my previous SUV, so I hadn’t thought about it ahead of time. My fault for assuming. . .)

When I first saw the image on the bottle, when carousing the liquor store’s finer beers, I was immediately taken in by the graphic, and soon after I launched into investigating the flying canoe story. Launched into the beer, too. Both the story and the brew are quite flavorful malts. I believe the story has more of a “hoppier” finish, though.

Factory rails, which run front to back, tend to be pretty sturdy. The can be raised or flush - that is hidden under some pop outs and you screw directly into them. There is some argument around this one between individuals but my husband and I had both raised and flush over the years across various car models. Never an issue, frankly my one complaint about the flush rails is that it becomes more of a PITA to remove the cross bars when you want to get the roof more bare and the mileage better. Unfortunately more manufacturers have gone to flush rails so I have to put up with it.

The extreme weak spot in factory equipment is usually the cross bars, where you find that the weight bearing load of third party folks like Thule or Yakima have much higher weight limits than what the factory would put on. Even when we had factory cross bars, we took them off or put Yakima or Thule cross bars over them. Never trusted the factory ones for kayaks, nothing more than a bike.

IMO the two most important aspects of this video are the criss-cross of the bow strap, and running the strap under the the cross bar and/or raised rail where it exists as well thru the designated points for just the mounting device where it is something like a Jbar. I add a second strap and run it under the bar for my Hullivator for more than local, slower speed trips for the same reason, to help reinforce the mount to the cross bar itself.

Young men in stores love to sell people those dratted Jbars, I swear they get a bigger commission or something. I am not a fan of Jbars because it is way too difficult to load compared to anything that puts the boat up on the roof on its hull to start. Even with a partner we were not interested in the hassle, without one it simply would not work as well as what I do. I did finally get a Hullivator on one side, but on the other I used glide pads to a saddle. Before that stackers where the boat still goes up on flat on its hull to get it into its initial position. I travel to my rental each summer with two boats so the second side gets used.

I appreciate all the great tips. I’ve been checking out the Thule and other sites and will definitely decide on a quality rack product as soon as I get a new vehicle. For 2 kayaks, I was considering 2 side-by-side sets of Top Deck but my boats are about 27" wide each at the cockpit, which would require 5 feet of width on the roof! Another option may be something like the Compas with defninitely a good set of cross racks and bow/stern straps, but I can feel the pain in my back just thinking about loading the kayaks on these.

I didn’t mean to drag this into the “racks” topic, and I’ve just discovered there have been plenty of similar discussions on this board over the years. But I guess it’s all in the name of avoiding flying kayaks and canoes.

There is a way to mount two wide boats flat on a narrow-ish roof - use V-bars.
Since the attachment point for the cradles is under the center of the boat hull, the cross bars only need to be wide enough to account for half the width of each boat, plus an inch or so of separation, plus a few inches for the mount itself.

Pictured are 24 and 25-1/4 inch wide kayaks mounted flat on a Mini, the crossbars are not long. The boats extend outboard of the roof somewhat, but not the bars. This is a rock-solid setup, by the way. 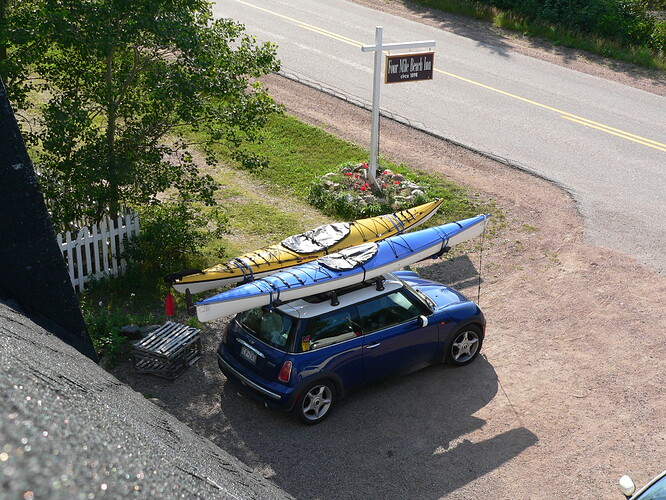 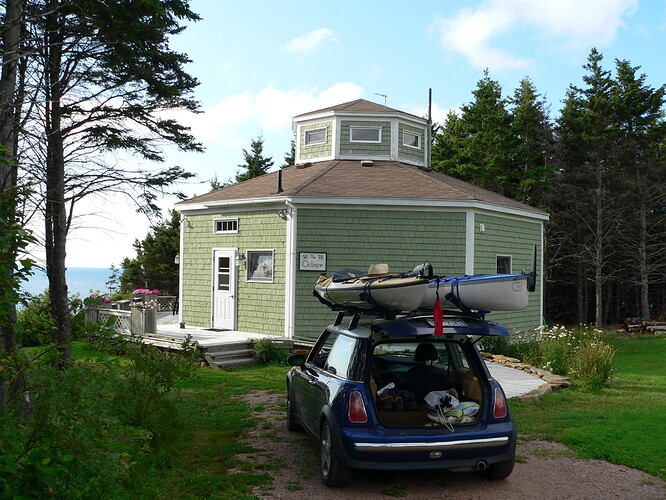 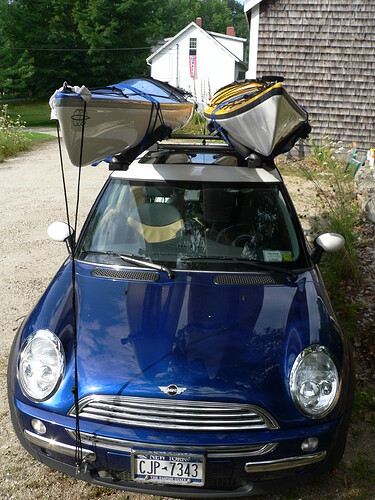 Yep, the wing style also allow you plenty of space to mount other rooftop accessories if you desire. Top pic is of my Swagman Exo Aero Wings, bottom pic is a set of Kayak Wings by Great Lakes Kayak. 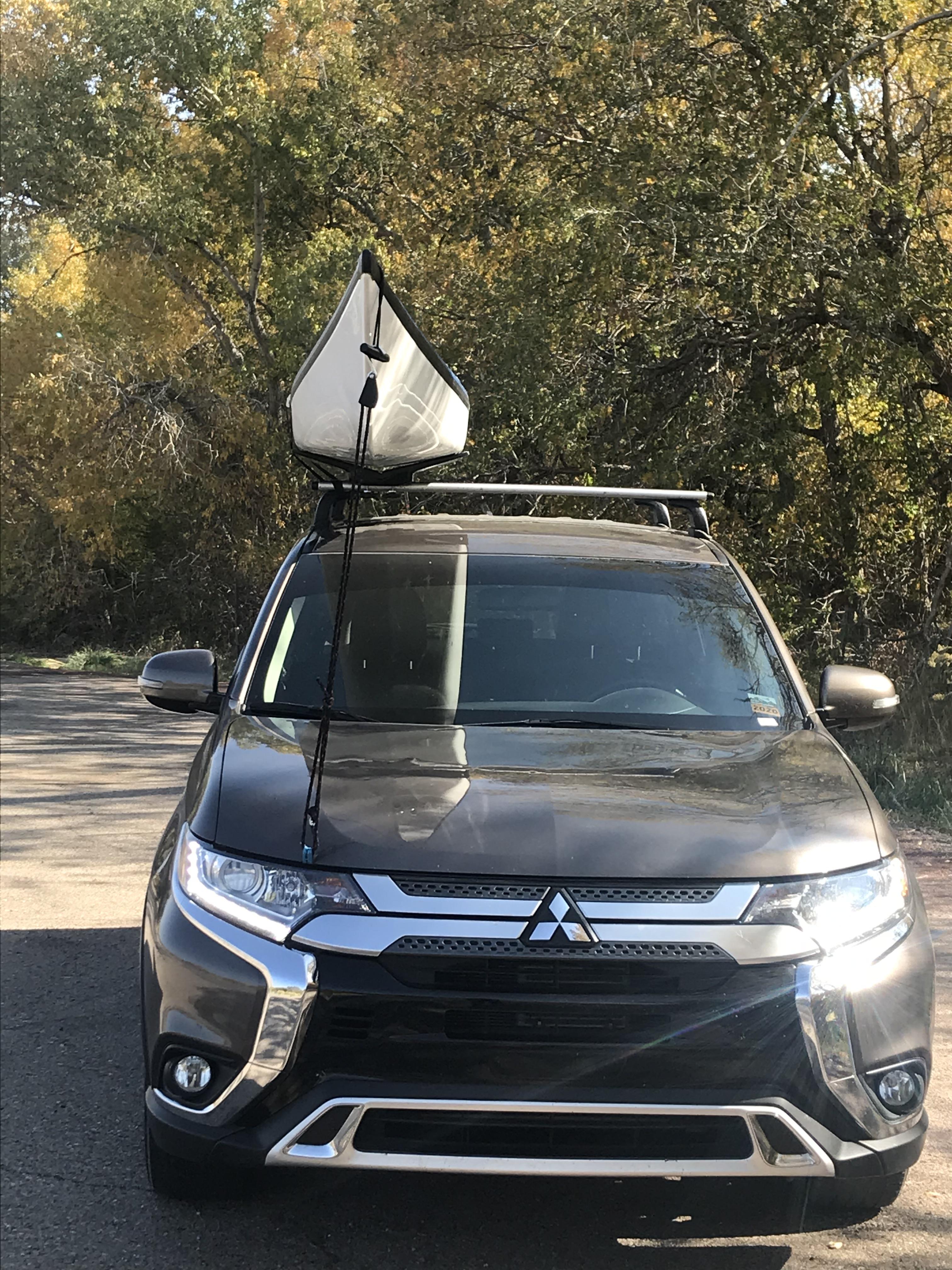