So I saw in a video on the Swift website that highlighted a carbon footbar they offer in their Prospector canoe. Since I have installed, over the years, many home-made and Wenonah footbars in both canoes and kayaks, I thought I might try one out. I know I’m not the only one who prefers a footbar in some (not all) kayaks, as I saw a Kestrel on Craigslist recently with a footbar installed. A request to Swift for specifics and mounting method returned the following cryptic (almost condescending) reply: “In a traditional kayak like the Saranac 14 you can only feet foot braces. They operate on a track and have a single peg on each side. We can only use a footbar on open top boats like Pack boats, solo canoes, etc.” Just wondering: Am I and the guy on Utica NY Craigslist the only two people that prefer a footbar instead of pegs?

I can’t honestly say I have ever seen a foot bar in a kayak, always either a bulkhead or laterally placed foot pegs, usually tracked. If there is no central pillar in the way, it should be feasible to install a telescoping foot bar. If there is a central pillar, a slot would have to be cut in it to accommodate the bar and allow fore and aft adjustment.

One potential concern would be a slightly increased risk of foot entrapment. There have been whitewater kayakers whose feet became entrapped on foot pegs, usually when some portion of their footwear got stuck on a peg. This was part of the reason that many whitewater kayak makers went with front bulkheads instead.

The Saranac has a fore-deck hatch so I presume it has a front bulkhead. If you like to keep your feet in a more central position than foot pegs allow and you don’t need adjustability, one option would be to simply get some minicell foam blocks of appropriate thickness and glue them to the forward bulkhead.

You must have missed the part about me having installed footbars in several kayaks over the years. It’s clearly a personal preference that works for me and least one other paddler. I was wondering if we are the only two; you apparently prefer pegs, and that’s OK!

No, actually I much prefer an adjustable bulkhead., but with a fixed forward bulkhead that is not too practical.

One thing I do like about foot pegs is the ability to take your feet off the pegs toward the midline and stretch your legs out periodically.

My 1970s Valley Nordkapp and Valley Anas Acuta both had tubular aluminium foot bars right across the kayak. One end was against a stop and the other end was pivoted, so that if a foot was trapped behind the bar, then the bar would swing towards the paddler to release the foot. I found the foot bars to cause uncomfortable pressure on my feet, so I chopped them out and replaced them with thick foam on the bulkhead to fit my leg length. It’s good when upside down doing a re-entry and roll to know that one’s feet will not be desperately searching for a foot-bar.
Nick

Foam footbrace is my preference. I like being able to use my entire foot to brace against it, not just the ball of my foot. This morning I paddled my kayak that has a foam footbrace, then after I came home I paddled the boat I keep here on the beach which has foot pegs. Ordering another block of minicell foam so I can carve a footbrace for that kayak.

I ordered a couple carbon fiber foot plates from ONNO a number of years ago. It is nicer. I like the foot plates better than foam, just because foam has that little bit of give.

I always cover my footbars with foam, usually pipe insulation or something similar. My biggest complaint with pegs is that on some hulls (based on design and my leg length), I find my feet in an uncomfortable out-toe position. A bar allows me to keep my feet vertical and reposition on occasion. I honestly can’t imagine how one could get hung up on a footbar or have difficulty locking in. As far as mounting anything to a bulkhead, I have never seen a bulkhead I thought robust enough to serve that purpose, certainly not the thin kevlar membrane that Swift uses or the foam bulkheads in many of my previous boats.

The “frog-legged” splayed out foot position, which for some unfortunate reason is almost universal for touring kayaks, is great for stability, poor for generating power via leg drive and torso rotation. Feet and knees close together (surf skis and performance kayaks) is the opposite – mediocre for stability but great for maximum leg drive and strong torso rotation for a fast and efficient forward stroke. The best setup is one that lets you adopt either position depending on the conditions and how you feel.

Most of the high-performance (go-fast) kayaks have a full width footplate, angled at about 60 degrees (90 degrees is uncomfortable and lower angles such as 45 cause your feet to slide up the slope). A full-plate lets you drive with your heels (great for sprinting), while a half-plate allows you to extend your heels under the bar for a good stretch after many hours in the cockpit, and for this reason is preferred by some long-distance paddlers.

There were some entrapment deaths back in the '80’s and footbars fell out of favor. If you modify your kayak ensure that you don’t create a hazard.

ONNO used to offer a foot-plate conversion – it was made of carbon, very light but didn’t include hardware for angling the plate. I have replaced the small stock pedals with a Big Foot system on my Valley Rapier with very good results (comfortable and allows adjustment of rudder lines from the cockpit), although it is a bit heavier than I prefer. There’s also a version available for kayaks without rudders. 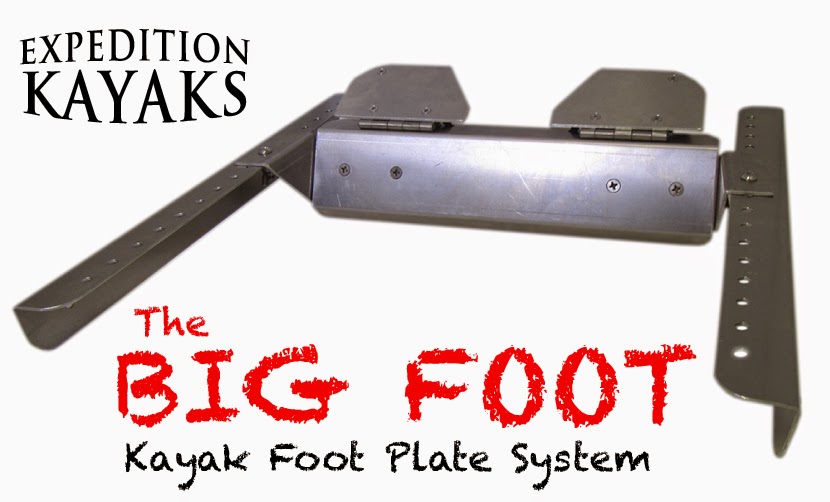 Foam for me. Great benefit of foam is it really shuts down the loan requests.

I like foot pegs because a 12 pack of beer fits between them.

@qajaqman said:
Foam for me. Great benefit of foam is it really shuts down the loan requests.

So does the footbar! Nope, sorry, can’t adjust 'em, only set for my one-of-a-kind inseam! Luckily, I never make a modification in which I can’t revert back to original, in case I sell it. Maybe I had too many Wenonah canoes when I was a kid…