For Celia on a Friday

for your Friday…some peace to enjoy. To incorporate some Greenland technique, it helps to stay calm and lose all fear {as much as you are able} Watching Alison may help.

Wow, it looks like an art form / dance the way she does it. Then for rough conditions, is there a Harlem Globetrotters type group that does rolling?

If you can roll slow…fast is easy. Rolling is a combination of yoga or Tai Chi and water. 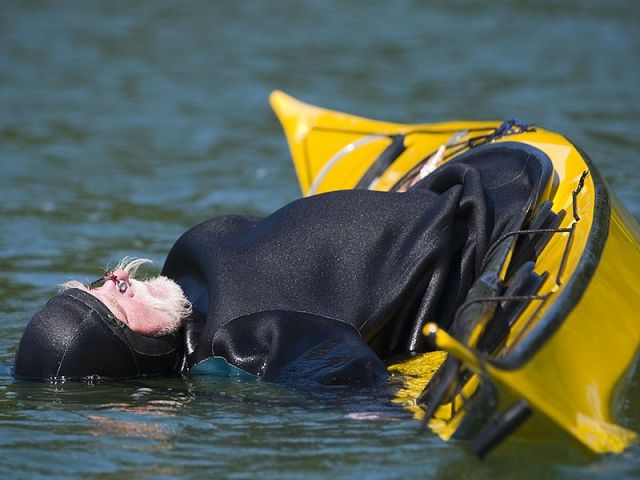 I used to think that you needed, NEEDED to be able to do this to go kayaking. For many years. I don’t know why it didn’t occur to me that I could just go learn how to do it, but that kept me from considering kayaking for many years. I wear very strong glasses so never been a fan of swimming or water activities since they involved not being able to see much of anything.

But then I discovered SOTs and recreational kayaking and none of it required or even used rolling skills.

But now I’m curious to expand my horizons and maybe I do need to roll and honestly the recent rolling discussions are equal parts clarifying and confusing. Wish me luck at tonight’s rolling class

The instructors at the QajaqUSA sponsored Greenland Training camp I’ve attended take this “zen” relaxed approach that Allison illustrates. It helped us nervous newbies that the coaching was in a chest deep shallow lake where the teacher could stand beside the boat and take you through it slowly and step by step while you got the body memory of the process dialed in. And you could do it without feeling panicky, because you could signal the coach to reach over and roll you over if you felt “stuck”. The most useful stage of the training was spending time getting used to the “half roll” of the fully extended floating balance brace on your side and then sliding back up onto the deck keeping your head low. Once that becomes natural and comfortable, you are halfway to the full Greenland roll.

Good place to learn. I taught there for many years. I also was one of the founding group for the Gathering in Mn. {I first met Alison at Michigan Training Camp} Willowleaf, I think the year you attended was the first year since it’s beginning, that I didn’t attend. That year and several more I went to Great Lakes Kayak Symposium in Grand Marais Mich and taught rolling. {I had been doing both but had to cut back} Time and miles…{and I was still teaching at Inland Sea symposium}

Then for rough conditions, is there a Harlem Globetrotters type group that does rolling?

Well, here is Dubside demonstrating in some lightly textured water: 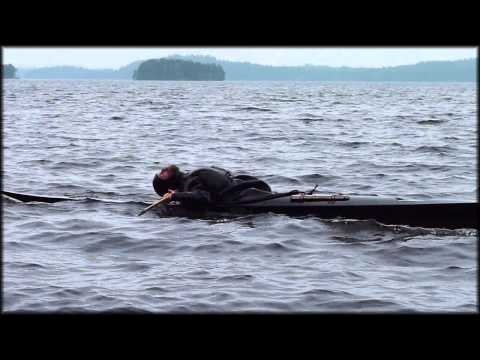 And Warren Williamson in some rather more textured water: 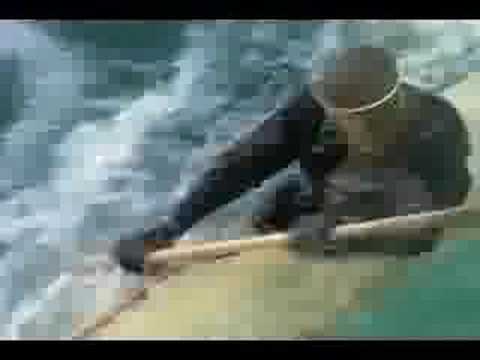 I just got a notice that the Michigan QTC is hoping to be able to schedule the event this year. Apparently the scout camp on the Herring Lake peninsula was no longer going to be an option and I had heard that they were seeking another site.

I’ll need to reskin my SOF before the camp this year if it is a go.

I’ll need to reskin my SOF before the camp this year if it is a go.

Takes a bit of ambition and free time…

My Kaze (wind) has been sitting naked for years because of laziness. I do regularly put a coat of tung oil on her bones.

So sorry Roy! Looks like l went and missed this. Thanks!
In my defense, my community orchestra is coming into a concert and we hit a sudden rash of mask wars between a few players. I am the reluctant President so am stuck as final arbiter. Nothing better than being up at 6 and not being able to get away from the PC until 11 w dueling emails…

I actually have worked with Alison at the old Downeast Symposium a couple of times. On general Greenland paddling rather than just rolling. She is excellent.

I am stealing some time now to figure out how to best get me and a boat near someone for a couple of sessions to work on recovery. Think l will be a fair weather paddler and wait until l don’t need to pull out the ice hood though. I am such a wimp these days.

At its most basic a roll is a roll. You are essentially starting a log rolling then staying out of its way until it is upright. That is why rounder hulls often roll easier. And why in the Nordkapp LV you will windowshade unless you remember to stop it, if you start with a strong hip snap.

The variation is in ways to get that motion and speed of the motion. Sea kayaks tend to be kinder for rolling than rec boats so support a lot of variation. Less capable boats are wider and may be less flexible. Greenland boats are like wearing jeans so support gazillion approaches.

Rolling in surf or waves or current requires more skill etc than in flat water.

To properly control a roll , is to not use momentum. Slow motion rolling is the key to actually perfecting rolling. Control the roll from the beginning to completion. Don’t rely on momentum . Momentum is , a crutch, and is one reason many people have an on and off relationship with rolling.

I have been watching Brian Schulz’s videos on skinning. He has been on a roll this winter in refining and adding to his instructional segments. Brian’s video production and editing has really become first rate over the years I have been following him (gotta be at least since 2008, when I got interested in SOF’s and found his earlier blog.) I have also become friends with Mike B., another QTC instructor (and skilled craftsman with many talents) who has some experience with SOFs and will pick his brain. I learned during the camp in 2017 that he and his wife were longtime friends of my favorite cousins in Toledo who I often visit – he lives near them and I have visited his shop which is along my route from western PA to visit kin and friends in Michigan.

Part of the reason I invested in the big honking garage and shop I had built behind my rental property a few blocks away was to have a space to do projects like a new skin, or maybe even to eventually build my own SOF from scratch, something shorter like an F1 (that would fit more easily inside my camper van than the 18’ plus West Greenland.)

I recently learned that our excellent indie outdoor/kayak outfitter, 3ROC, has started offering Wednesday night rolling sessions at the high school indoor pool that is less than a mile from me. From posted pics it does appear to be primarily for whitewater boats and C to C rolling. Though I do know one of the shop owners had a GP made for himself last year – I loaned him one of mine for his woodworker friend to copy. Maybe there is some interest in GP skills there so I’ll check with him as to what instructional resources (if any) are part of the sessions.

Agree on momentum per se, though there are boats where they want/need a stronger move to get by a certain point in the motion. That is why my percentage went from 1 out of 3 to 3 out of 3 within two weeks of going from the CD Squall to the NDK Explorer LV.

I also ended up with a wicked strong start to the roll, which is where I should make a change. No reason I should not be able to move thru a static brace at least in the Romany. But it is a different body habit.

It is still rolling a log to me, whether fast or slow, and staying out of the boat’s way. The usual roll killing habits like lifting the head too early (my sin) are something that gets in the log’s way because the effect is to drop the lower body into reversing the motion.

Will have to check out Schulz’s video skinning techniques to see if anything new. I skinned my Ronin and Kaze following Robert Morris’ hammock method, using a lighter and tighter poly cloth. I was able to do this in the large basement of our family’s “Boston 3 decker”.

In my current Cape home, the basement is pretty tight. I would have to move/clear out stuff, including my home gym, to skin Kaze’s frame. As much as I feel a pang to see Kaze’s naked bones, it is Just not worth it to me to disrupt my daily (workout) routine. 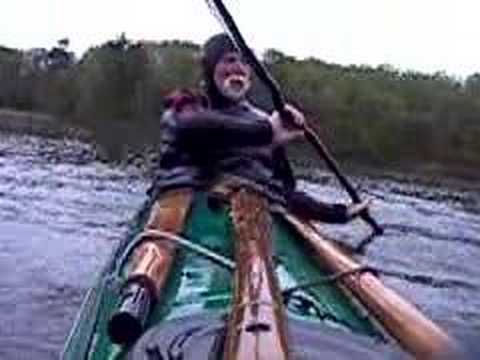 That is the change I need to make. Not that having a fantastic hip snap is useless, but my snap is aging along with me.

Why I think I could have a lot of fun with trying to stop it midway into a static brace, even if it now means I have to stick my inside hand under the boat to get the full arch.

But this is all a very different body response than one and done. I got to my left side roll by sculling with increasing control and gradually lessening the number of strokes. Then one night in the pool voila!, I was up. I feel that is a far better approach for me now than how I was started on my right. Too many CtoC folks in the pool, though I eventually figured out a sweep was a much better idea.

This has gotten me going. Once I get clear of this weekend’s concert, I am going to spend some online time finding the right resource to spend a weekend with to refresh/relearn the roll. I miss having confidence in it even if I nowadays paddle to avoid the need, out of caution for being solo.

Here is another exercise… 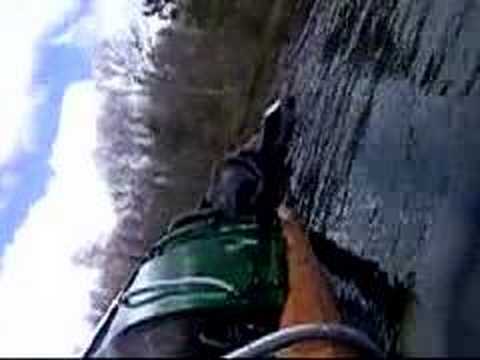 another view of controlled rolling 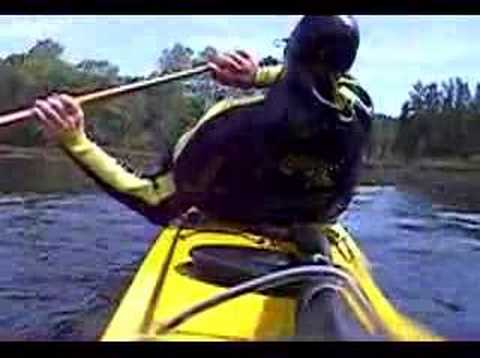