For Father's Day, I'm allowed to pick a GPS for Marathon Canoe Training: which should I pick?

Just got a great Father’s Day present: I’m allowed to pick out a GPS so I can track how far I’m paddling, and how fast I’m going (current speed and avg speed): wooHOO! I’m trying to learn flatwater canoeing in an old J190, with the goal of getting in good shape, but I also would love to do OK in a race some day. Which GPS (lower end price hopefully under $200) would show speed, distance, position and attach for easy viewing to a canoe? I’ve found some Garmin devices like the eTrex 22X, but I can’t make out the technical specs to tell if this would do those tasks?

I have an old Garmin that does all you want very well. Good product.

What type is it? How do you mount it on your boat so you can see it?
Can you tell if the eTrex 22x would do what yours does?
Garmin eTrex 22x, Rugged Handheld GPS Navigator, Black/Navy https://a.co/d/gKcCyAl

Playing the Father’s Day card… getting out on the water!

I have the earlier version of your choice of Garmin. It will do what you want. It will do speed over ground, average speed, track overlay on the map of where you paddled, and more. The micro SD card allows you to expand the memory. Checkout this link for free map downloads. I like them better than the base maps.
https://www.gpsfiledepot.com/

i have used and enjoyed using a Garmin GPSMAP 60CsX for years. I also have newer 60 series models I use for SAR, but immensely dislike those as unnecessarily bloated and confusing to operate between useful disiplay screens. Here is a photo of a pair of 60CsX devices I used during five years of Yukon River races. Two so that one is in route waypoint direction arrow following mode, the other displaying map mode. Unlike my experiences with newer models, one set of Lithium batteries easily lasts longer than 24 hours. Most important when continuously paddling for more hours than that at a stretch. When this model went obsolete by Garmin a few years ago, and after battery eating disappointment with later models, I went to ebay and purched a couple of extra 60’s for much less money. your rig is awesome! how are they mounted to that fwd aluminium thwart? Also, is that an old-school analog compass mixed in with the cherries and carrots? nice! i would really love to see the rest of your setup if you ever got a chance: throwbags and drybags and velcro and a sprayskirt all in the bow? (do you use this in the 1000? and good luck if you’re in it this year…) 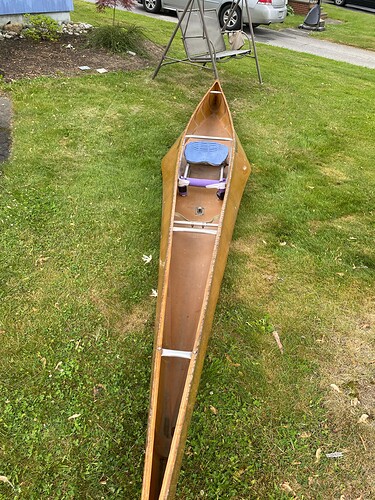 Thanks! is it easy to mount where I can see it? and I still swim from time to time: is tipping a giant risk to losing it/destroying it? (on river rocks etc)

Another reason why I much dislike the newer 60 series models is the mounting method. The 60csx mounts with a detachable handlebar type of mount that clamps onto the thwart by tightening a screw. I carry a stubby screwdriver in my PFD pocket so that I can mount to any of serveral canoes I paddle from time to time. In contrast, the newer models mount with an attachment that requires zip ties every time you change to another canoe. they requires a clipper to dismount and to carry a handful of zip ties. The orange device in my quick snack food (cherries and sausages) container is a SPOT tracking device, which is a mandatory race rules required safety device to race on the Yukon River.

I am in a voyageur canoe, have used a 28’ woodstrip, or a 34’ carbon fiber canoe in different races. Each had its own full custom sprayskirt, with access for each of 6 or 7 paddlers. The first photo below is at Eagle AK, shortly after crossing the border from Canada to the USA, where we were required to stop to show our passports. The second photo below is at a place called Five Finger rapids, and this area of deep standing waves is the reason for a required spray skirt, other than when in the ocassional thunder storm.

I highly recommend paddling the Yukon races. Either the 440 mile Yukon River Quest or the Yukon 1000 mile. Have done it 5 times (so far). this is 10 different kinds of amazing! These pictures tell a million words: what great adventures this looks like!

I keep mine in a clear top pelican box with a small carabiner clipped to a loop on the thwart.

Hi, Thezef,
I use a Garmin GPSMAP 64s, which is more money than your budget but I like the GPSMAP series because they include a more sensitive receiver and use buttons for control. The eTrex series doesn’t have the more sensitive receiver and uses a joystick for controls. The smaller (shorter) screen has higher resolution but is otherwise similar.

I bought a carabiner lanyard clip for my 64s and it works well. I clip it to a thwart bag and keep it stable with a mini bungee cord. It’s not as secure as the setup yknpdlr uses but it works. The lanyard clip is available for the eTrex as well.

If battery life is a priority the eTrex 22 is the clear winner but I just keep a fresh set of rechargeable NiMH batteries handy when I’m out. I find that I can run the unit for two days before the batteries run low, especially if I turn the unit off during longer breaks. Swapping batteries is quick but if you’re racing I suppose every second counts.

Check for discontinued models on ebay. I bought 4 extra 60csx units there, cheap. Only one of them was a dud with corroded battery terminals.

I was going to suggest Map 60’s or 62’s as well. You can usually find them used in good shape on E Bay and they should come in under budget. I had a 60 for years and upgraded to a 64.

Pls let us know what you get.

I decided to go with the 60 csx from eBay (with a bike handle bar mount). I figured i could try to learn the system and some paddlers near me have similar ones (so they can help me get started). I was waiting till I could take a picture of it on the water, but I’ll send that soon as it gets here.
Thanks so much everyone!!!

You will not regret your choice. You can buy maps from Garmin, or download free maps from gpsfiledepot.com, or other online sources.

You can also use Garmin Base Camp with the GPSMap 60 to save your tracks and waypoints.
You can probably find a RAM mount and base that you can attach to your boat. I have then in all mine, so I can move it around.