I just recently signed up on this forum and made an introductory post, with photos, showing my new/used Cayman 124 fishing kayak from my bro-in-law.

I have gone with my sister & bro-in-law twice so far, riding in their big Dodge Ram, fully equipped with Yakima roof racks, tailgate/hitch mount bed extender, etc… But I am not equipped (yet) to go out alone.

Here is my 2012 Ford Escape with the factory OEM roof rack crossbars, that are rated for only 100 lbs. Since the Cayman 124 is a flatbottom fishing kayak weight at 47 or 48 lbs or something like that, what would be the best way to transport it?

What do you recommend?

Don’t trust the rails. For a spell Ford made the rails more decorative than sturdy. They are concave plastic mouldings with a metal track for the crossbar to attach to without enough substance at the anchor points to reliably carry loads under strain.

I carried a similar weight canoe on the crossbars of my 2008 Escape and found the bars plenty strong and stiff but I ended up putting on a real rack. If you push down hard on your crossbars I think they’ll feel strong to you. I think that most accessories made for Thule or Yakima aero crossbars will attach to your crossbars. That said I think your best option is to look for a used Thule or Yakima rack (hopefully with J bars) on Craigslist. Your normal roof rails mean you can use the relatively common racks made to attach to roof rails like yours with rubber straps. There are often some very nice bargains for roof racks on Craigslist.

As Marshall said, those side rail end pieces that attach the rails to the roof look really flimsy. You can see in the photo that they’re just hollow plastic. I had a similar setup on an old Ford Escort station wagon and they flexed a lot so I didn’t use the built-in rack. If you do decide to haul your kayak on that OEM roof rack, please, please, please use good bow and stern tie-downs for some extra security for the cars behind you in case the rack breaks.

Just throw your boat on the roof and see if you have any concerns about flexibility. My 2008 was an awesome canoe transport vehicle but I don’t know if they made any changes from 2008 to 2012. You also have the option of just folding down the rear seats, opening the rear window and just sliding the kayak in. You may be surprised how well it works. 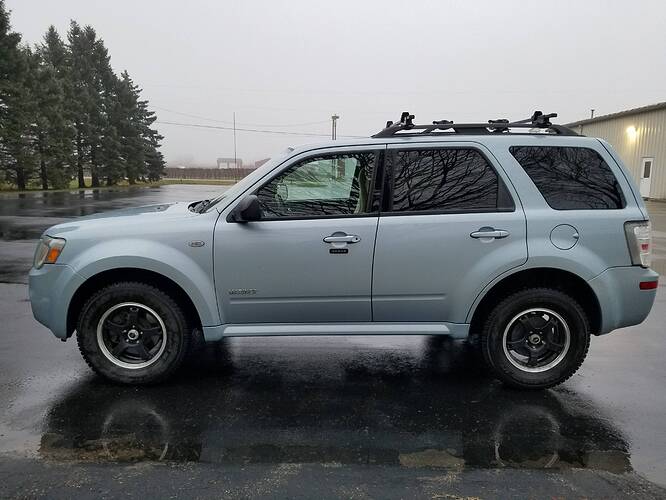 Thanks… My wife helped me from the other side of the Ford Escape, and I accurately took measurements and we made sure each side was exactly the same. Then I cranked down on the little thumb wheels, and the crossbars ain’t going anywhere! They don’t move, they don’t bend (unless I were to put something REALLY heavy up there), and they are absolutely silent - even at 70-75 mph on the interstate – unloaded.

I’ll check out Thule and see what they might have to offer. Yakima got a little “funny” on the phone with me, as if they were trying to persuade me to buy THEIR factory crossbars & kayak mounts.

Thanks… I have decided to not bother with J Bars on the factory Ford OEM crossbars and raised railings. I am looking at absolute total weight distribution (as close as possible), even though the Cayman 124 is 47 or 48 pounds or something like that, but yet Ford claims their factory crossbars and factor raise railing system is rated for 100 pounds.

Both Yakima and Thule make those “cradle” type of feet so you can haul the kayak right side up, with bow and stern safety harnesses too.

I found a pair of roof rack padding, made by Malone (technically - it’s just a sliced “pool noodle” but yet enclosed in a weather proof, UV resistant, velcro strapped outer liner). I attached both of them on my roof rack, and that was that. Easy peasy…

Then, after reading some excellent advice on here, I used the “beach towel trick” and laid a folded beach towel over the top of my Ford Escape’s hatchback. Then, I carefully…carefully… slid my Cayman 124 fishing kayak up on the OEM Ford Escape padded crossbars. As seen in the photo, I didn’t do anything after that. No tying down, no going anywhere, nothing at all but just observation and careful look at the sturdiness of the OEM Ford factory roof rack system and crossbars with a 50# fishing kayak laid up on top. Pffffftttt… No big deal. No concern at all. It’s like the Ford Escape just sat there and didn’t think anything of it. 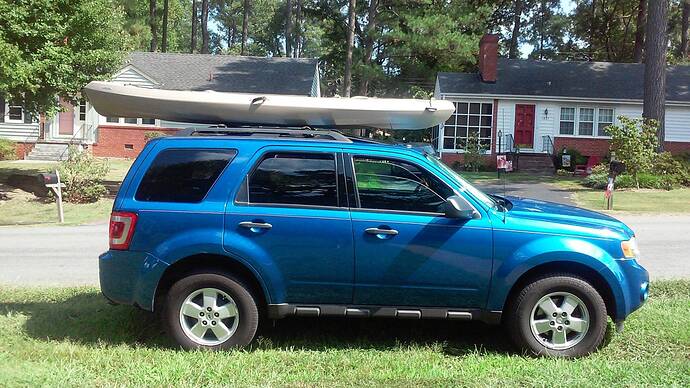 My 2012 Ford Escape has NO PROBLEMS with transporting that 50 lb fishing kayak today! B)

Granted, I traveled side roads down to the river, only at 40 mph (max speed). The roof rack crossbars didn’t snap, crack, or pop loose or anything at all. Once I tightly cinched down the tie-down straps, the natural “bow” of the OEM crossbars, was taken out (obviously), but they never budged at all!

All set for the Maiden Voyage to the river! 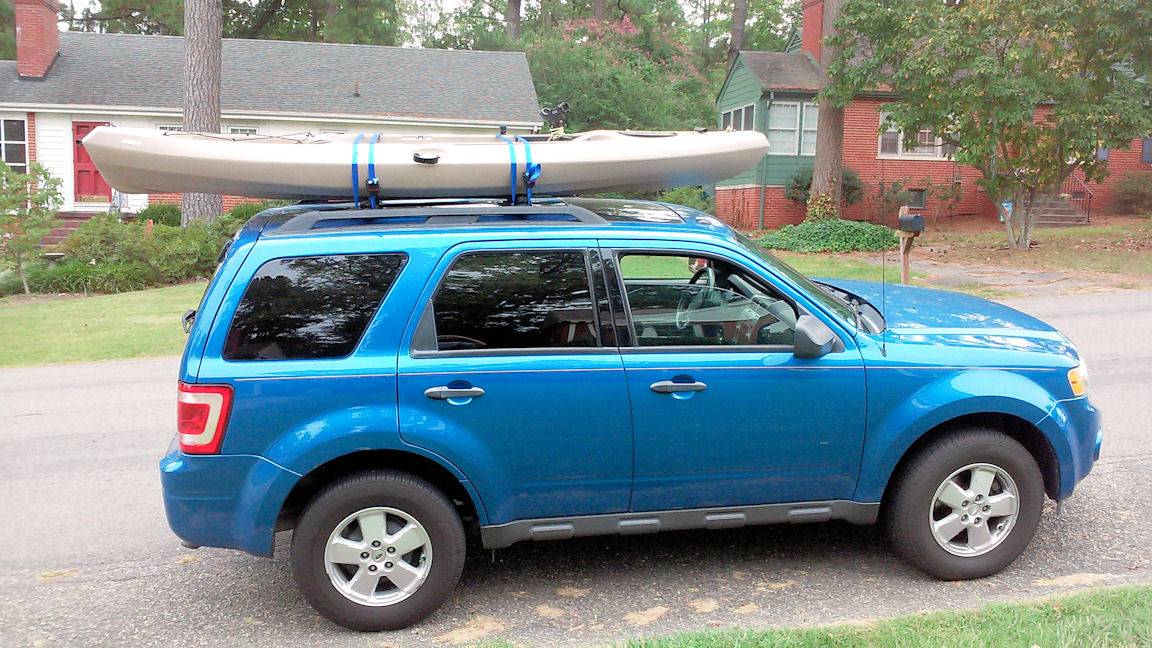 Made it to the river launch parking lot, with no troubles at all! They say that when transporting a kayak upright on crossbars, to simply lay an old beach towel down on the roof and rear hatchback. Gently, slide the kayak backwards, off the roof rack crossbars downwards at a 45° angle, and then with muscle power, heft the kayak up and out of the way of the Ford SUV. 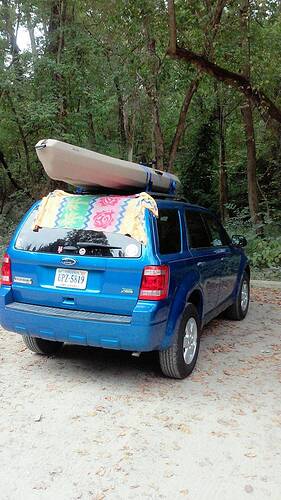 Enjoying the scenic views of the James River, here in Richmond, VA. 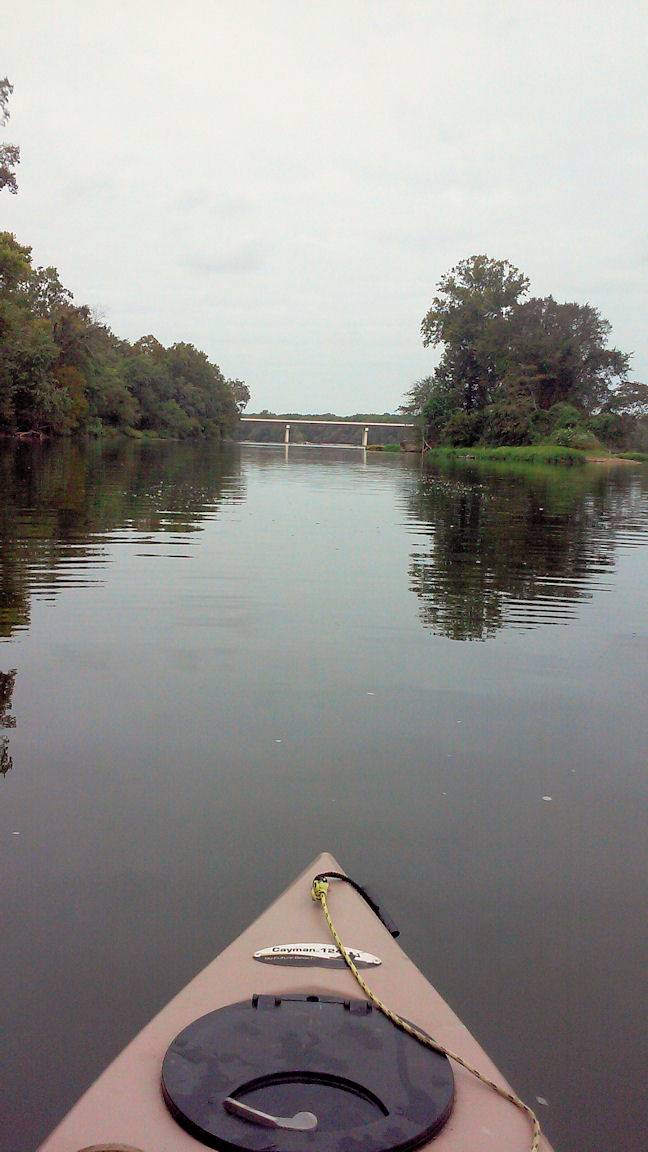 Nice to see that you found a system that you are happy with and that you are getting out on the water. I have a brother in Richmond but have never paddled the James; it looks great. If you want to do highway speeds it’s best to get some bow lines on the boat and that’s not hard. Your towel is quite stylish.

Thanks… Yeah, I need some very sturdy 20’ long, bow & stern straps! But, for now, just a simple 10 minute buzz down to the river from my house, is not really a big deal.

It’s a Google Maps satellite view of the James River in the western suburbs of Richmond, near the University of Richmond. I launched my kayak right there at the Huguenot Flatwater area, and the photo above is from down river near one of small islands, looking back at the Huguenot Bridge.

Looking closer at that map link, you’ll see rock outcroppings scattered around the river. The James is like the Susquehanna in Pennsylvania. It’s navigable, it’s not navigable, it’s 3’ deep, it’s 10’ deep but with submerged boulders, then all of the sudden, it’s navigable and 15’ deep with nothing but water. Power boaters and jet skiers are all over that small stretch though. To the far left of that map by Chippenham Pkwy, you’ll see the Bosher Dam. That’s the end of the small area for power boaters. The rest of the river flows through the city, meanders all around rock outcroppings, and you almost have to slalom around boulders while paddling downriver. Right at Shiplock Park, in downtown Richmond, they dredged out the James, probably blew it up with dynamite centuries ago, and right there, the whole river is 30’ deep in a channel for small cargo ships coming in past Williamsburg, Jamestown, and in from the Chesapeake.

We used to paddle the James near Hopewell, Va. Very pretty but that was 45 years ago.