I was in the garage at 2pm and a ? walked into the yard. Tan, with long legs, and very scruffy. He saw me and trotted away.
A wild animal in the middle of the day is cause to be cautious.
Could have been a dog?

A Fox is just a bit bigger than a large cat. A Coyote unless not grown is more the 3 times the size of a Fox.

Sounds like a Coyote. Carol saw one in our yard as she drove home one night. We also had a cat taken years ago. I heard the cat an went outside with a light saw it run off with our cat. Every Coyote I have seen has run off as soon as it knows I am there. Mostly I have seen them during the day.

Coyotes look surprisingly like scruffy dogs, just as you described.

My guess would be coyote.

Coyotes (a female and one of a pair of her nearly grown pups who were begging beside the highway in Death Valley). They are about the size of a border collie. Since they have been interbreeding with both feral dogs and wolves in many parts of the country some of the hybrids are getting huskier looking but these two were pretty typical of a classic coyote: 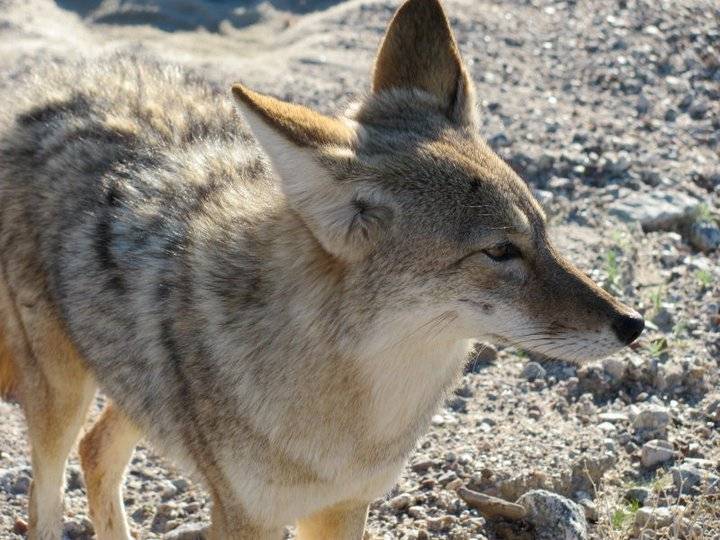 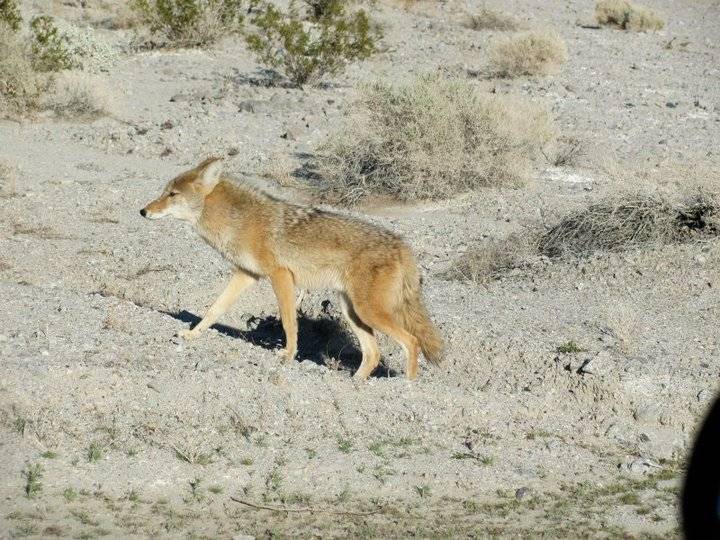 Here are the buds on a stroll on our lake last winter. 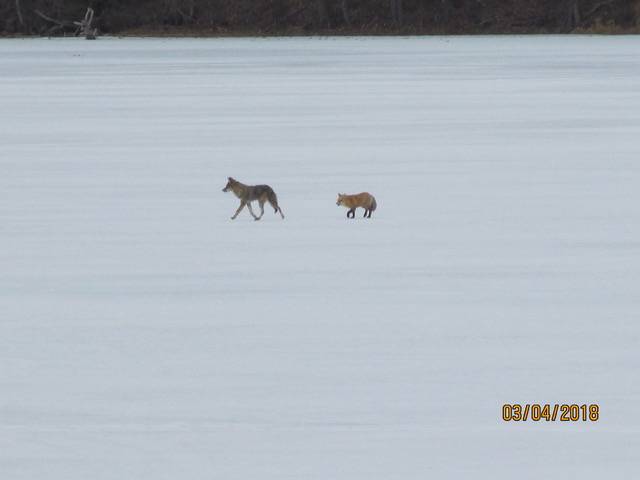 We have a match but this one didn’t look that good. We used to have a bunch of feral cats in the neighborhood, but now they’re rare.

The coyote around here are exactly as string describes and not nearly as big and pretty as the ones shown by willowleaf. A fox looks like this. 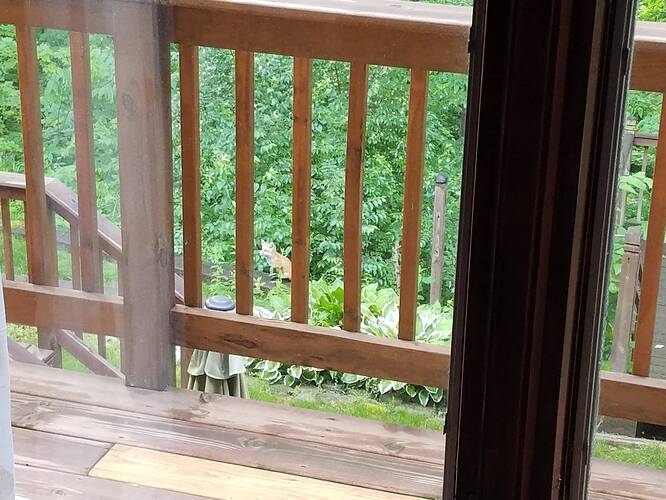 Coyotes here in SC tend to be bigger than the ones I have seen out west. We have both Red Fox and Grey Fox. The Grey Fox are more common and smaller. Here in the south mange tends to keep the Red Fox population down while Grey Fox are not impacted as harshly by it.

Wow, KM, I am surprised to see a fox and coyote hanging out together. My understanding has always been that coyotes will kill foxes, but I know that interspecies companionships can often be surprising. Foxes tend to be more successful predators of small burrowing vermin in winter while coyotes are faster at snagging rabbits so maybe the two have found it mutually advantageous to share hunting strategies.

Smithsonian magazine reports that the two species seem to be co-existing more often now that humans have made food more available. https://www.smithsonianmag.com/science-nature/foxes-and-coyotes-are-natural-enemies-or-are-they-180968424/

I was thinking it might be a young Coyote with a mature Red Fox in the photo. Nice Photos BTW.

@string said:
We have a match but this one didn’t look that good. We used to have a bunch of feral cats in the neighborhood, but now they’re rare.

Listen for them at night. They , usually there’s more, yip messages across the darkness. Don’t let little prey venture near woods out of the light. (Dogs, cats, kids)

Normally they won’t let you see them. That was an accident.

We had them in the panhandle. They used to come and dig up my fish cleaning remains. They would dig them up 2 ft or deeper and haul them off.

Was working late one night in N. Nevada when we had family of coyotes wander through our parking lot. This was at a remote airport.

Thinking the Fox sounds better… closer to a Margarita

They both should get you “howling at the moon” if applied correctly!

I’ve howled at the Moon with no chemical help. Mostly to amuse or embarrass my kids .

@string said:
We have a match but this one didn’t look that good. We used to have a bunch of feral cats in the neighborhood, but now they’re rare.

We’ve had foxes suffering from mange that makes them look “ratty” looking.