My mom has been paddling an OT Pack for many years. She used to use an Alden rowing shell and kayak, but as she’s gotten older she struggles to get the Alden rigging into the shell, and needs to sit up on a raised seat. The Pack was greatly appreciated for it’s light weight (she could get it into the water herself), and then someone STOLE it (that’s another story, but if you’re in the northeast and come across a Pack for sale with a big gouge, or repaired gouge, out of one end and a custom painted name ,Loup de Lac, on it, please let me know).

Is the racing boat going to be very tippy compared to a Pack?

yes. She might look into pack canoes ( and the OT Pack is not one of them)
Makers include Placid Boatworks, Hornbeck. Slipstream and Swift.
All are under 25 lbs. The OT Pack she has is heavy monster compared with the others. The 119 is even heavier

SInce she needs a raised seat. look at Swift. Placid will also do a hung seat.
These boats are not cheap however. It may well be worth waiting to see if any used pop up over the winter.

If she is used to a rowing shell she may be able to handle the Jensen but light weight is not sufficient… A 17 foot canoe has a lot of swing weight when getting it on the water.

Initial stability and turning are not high on the design criteria for marathon racing canoes. If your mother has good balance and is willing to spend time (and maybe a few swims) getting comfortable the J boat might work. Otherwise kayamedic has good suggestions. An additional option would be Adirondack Canoe: Boreas | 14' Canoe or Kayak. They will build with a web seat as well.

Thanks @kayamedic & @rival51. I’ve been drooling over the solo boats mentioned (Placid, Slipstream, etc) but they’re really outside our budget at the moment, and I wouldn’t put that much money into a boat without paddling it first, which is out of the question until next season. She definitely needs a raised seat which cuts down options and raises prices compared to a pack boat like the Hornbecks.

Interesting point about the swing weight of a 17ft, 25lb boat trying to get it into the water - I hadn’t thought of that. If the lack of initial stability isn’t a deal breaker, that might be. She used to have great balance but less so these days…and she’s also not really up to taking a few swims while learning a new boat. The possibility of an additional injury (added to those she already has) has nixed a willingness to swim. She just toodles around the pond on calm days nature-watching at this point.

I love the Swift. A buddy has one and it is definitely on my want list.

What is your price range? I picked up an ‘80’s vintage fiberglass 13’ 8" Curtis Lady Bug solo 3 years ago for $900. There had been several available around that price that summer – this one was in pristine condition. At 34 pounds it is easy for 71 year old me to hoist onto the roof rack or carry to the water on my own and is lovely for gentle river and lake paddling. It has a canted woven webbing seat that is quite comfortable. Still getting the hang of the single paddle C-stroke so I use a 130 cm old Bending Branches kayak paddle half the time.

Dave Curtis still makes canoes (he and his wife are Hemlock Canoe in central NY). I met them at the western PA solo canoe rendezvous this past summer. Some of their solos are under 20 pounds, but pricey at $1600 to nearly $4000. But if you can find a well cared for old school Lady Bug , or its “little sister” the 12’ 5" Curtis Mayfly, either could be just the ticket. 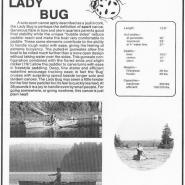 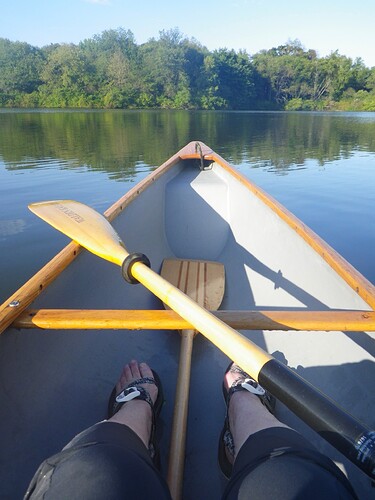 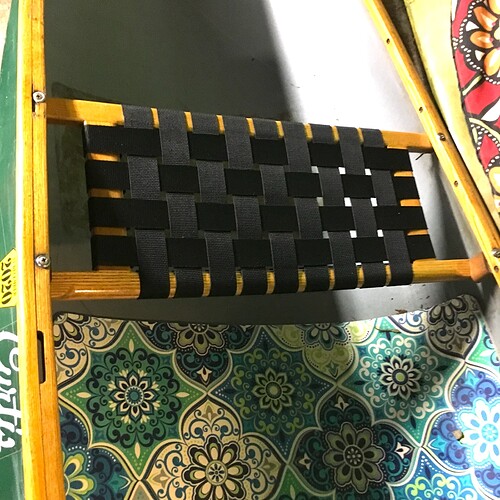 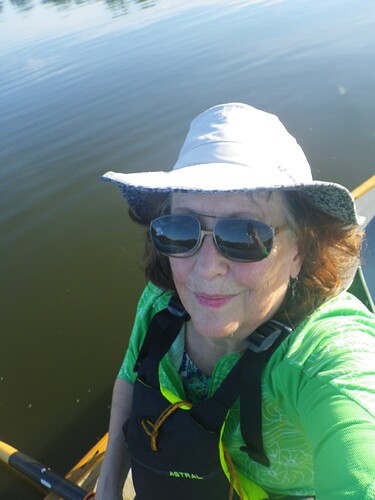 I’m trying to stay closer to $500, as the boat doesn’t get used that much. I’m looking forward to checking out some of these boats at the next Solo Rendezvous (I’ve never been to one, but hope to in 2022), but will keep an eye out for a used Lady Bug or similar in the mean time - thanks for the tip! @willowleaf

Does the boat stay in the water or at the waters edge? Will she be trying to lift it or load on a car?

IMO the weight in the water shouldn’t be as big an issue as the weight to load and unload and to get to that super light weight you might be paying a lot for limited usage along with risking it turning up missing again.

I bought a great used OT 147 last spring for 150 bucks and it is heavier than I would like for car topping but is a pleasure in the water and very stable. I can deal with the weight still. I store it outside and would be upset if it turned up missing but not as bad as if I had 2500 bucks say into it.

It will be stored on a public rack about 40yds from the water. I have to help her car top it at the beginning and end of the season, and she struggles to get it from the rack to the water. So weight really is a priority (but again, budget limits, and I definitely wouldn’t leave a $2,500 boat at the public rack if I ever can afford one).

The OT Discovery seller said the boat is from 1996, and according to a review on Pnet the older models were lighter at 42lbs, which would match what the seller claimed more than the 49lbs of newer models. We’re going to check it out this weekend. The Jensen boat is actually 18’6" according to its seller, which seems really unwieldy and may actually be too long for the public racks.

I bought a $40 kayak dolly that folds down and can go in the boat with me. I use it any time i’m alone and with another person if we need to go more than a few feet. That way at the most I only have to lift half the weight of my canoe. For a really short trip that is level I just sit the canoe on the dolly and roll it. If it is a longer run i put a cam strap around.

Getting it up on the boat rack might be the problem.

As far as length and the type of paddling you mention in a solo kayak 12-14’ should be more than enough I would think.

I second the Western PA Solo Canoe Rendezvous. There will be lots of small solos there and people bring their own and swap and play with others boats. There is often something for sale in the three figures rather than four.

I’ll be bringing a Colden Dragon Fly but its tippy for a seated paddler( seats can always be lowered in most any boat with hung seats) and its going to be out of budget. Thinking of bringing a $300 Swift Heron solo that doesn’t get used anymore but its near 40 lbs. 15 foot and fast but round bottom… ( the seat can be lowered for a warmer more secure experience)

@bud16415 Yes, a cart was added last season, but as you guessed getting it on and off the rack is a struggle when she’s by herself. I may go with the heavier OT and try to lighten it up replacing the wood thwarts etc with aluminum as I believe you did. Not sure that it’ll save more than a few lbs, but it might help…

I built this cantilever rack this fall off our boardwalk/ramp from the garage to the house so I could free up some space as I had been using 2 sets of saw horses. It also made mowing much easier. The first time I put the canoe on I almost ripped it out it was such a pain.

I figured out if the canoe was right side up along side I could roll it easy and have it rest on the ground on one side and the gunwales the other. It was awkward to get under the bottom then and lift and slide it on. I found if I looped a rope around the thwarts one each side of center I could lift it easily and slide it right on with my knees.

If she can get the bottom place that might work. I’m all about rigging something up when I can as my major strength issue these days is the knees. With flipping it that cuts the canoe weight in half.

And yes I got a good 10 pounds out of my OT between the wood thwarts and the plastic seats. It is still heavy. I would say about half the time I go to load my canoe at a public location someone offers to help. I normally decline because I need my rig for home and the times no one is around. Most of the time the person offering to help hangs around anyway to see how I’m going to do it. 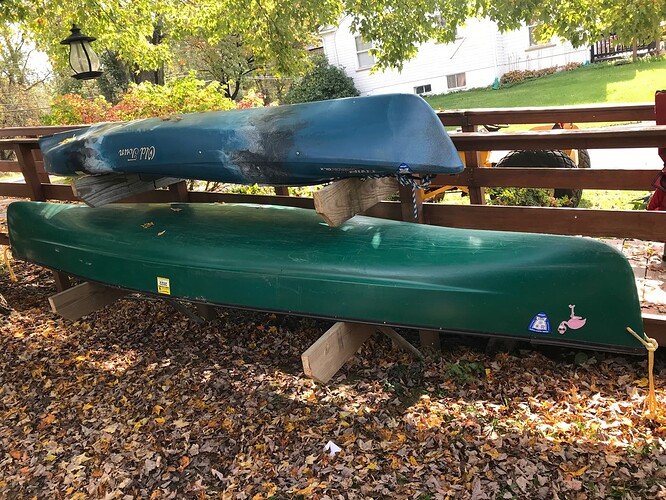 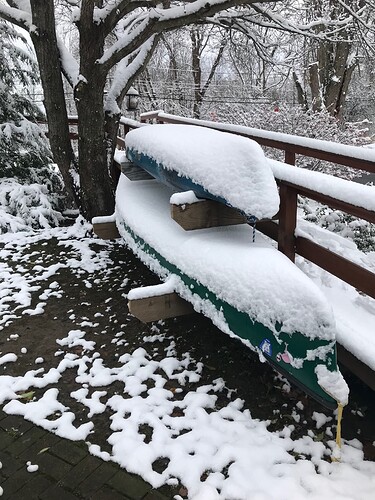 Thanks for the tips, she’ll have to work out a similar system, since we ended up bringing home the Discovery.

Sure do miss the 33lbs of the stolen Pack…