Gator attack on the Waccamaw

Tomorrow I’ll be on this river. There is a GoPro video floating around showing a paddler in the swamp along it and a gator knocking his boat over. That swamp follows the river from NC to Georgetown, SC behind the Grand Strand, which is packed now. Well known to Canadians and Ohioans.
It appears to me that he either crowded the gator or was being warned away from a nest. He had on a spray skirt and recovered quickly. He is shown leaving rapidly.
I’ve paddled those swamps several times and have never seen a gator, but did see a bobcat.
It is a beautiful, wild place most visitors never see.
Now you have the opportunity to get caught by wildlife or C19.

Here 'Tis
Doesn’t look like he was doing anything wrong…

I have to wonder if that pattern on the paddle attracted the alligator.

LOL I was thinking the same thing…

Kayaker: “This paddle should scare anything off”
Gator: “Hold my beer”

reasons to have a roll:

I might also add manatees. They might not have big nasty teeth, but, if surprised, take off like a rocket, and if you are in the way, too bad.

Wow. He kept it clean. I would have let loose a big stream of curses.

Good thing he had a skirt and appears a roll!
I will take the possible presence of a well fed Great White in the area any day compared to gators…

I might also add manatees. They might not have big nasty teeth, but, if surprised, take off like a rocket, and if you are in the way, too bad.

My first kayak, a kid, and a manatee… 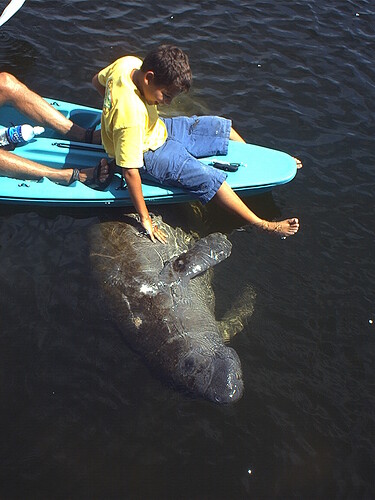 Note: I did not run over this manatee, it came under me…

Manatees get surprised and sprint away. They can be 1000 to 1800#. I have known them to surge that tail, 4 ft wide, and knock/lift paddler and kayak out of water as they sprint away. They don’t like surprises.

String likely has it gator protecting territory. Paddler stopped turned and started paddling toward gator. Gator sensed approach with intent not just passing by and attacked. Note that was just a charge, not bite and hold.

Probably one of those areas where channel is difficult to follow.

Lucky it was just a little gator.

I just came from the swamp. Beautiful morning. Osprey, Great Egrets , cormorant, red wing black birds, pair of ducks ,Wood I suspect. No Gators but we were in a pontoon.

Definitely looks like a gator protecting its territory or possible nest, As it looks like it came in for a bump and not an attack. Very quick recovery, and kudos for the yaker seemingly staying calm and getting out of there. Crazy video!

I’m on the gator’s side. Last week I caught two kayakers in little plastic boats trespassing on my territory and I was tempted to attack.

I ended up on top of a manatee once. I suppose neither of us knew the other was there until it was too late. We were both quite surprised (I know I was). It felt like he lifted my boat up a foot or more when he or she explosively took off.